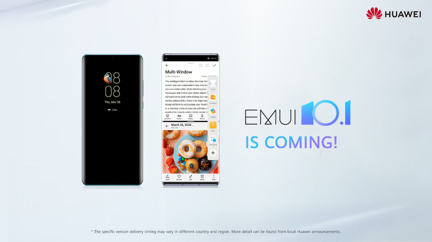 Huawei has announced the global release schedule of EMUI 10.1. First introduced during the launch of the Huawei P40 series in March this year, EMUI 10.1 is built upon Huawei’s distributed technology model, offering users a seamless all-scenario experience across multiple devices. As we move towards a smarter future, Huawei’s EMUI 10.1 promises path-breaking innovation that surmounts hardware limitations while allowing cross-device collaboration like never before.

The distributed ecosystem enables interconnectivity of multiple devices such that they work together as one super device, offering a smarter lifestyle across scenarios. As a part of this ecosystem, Huawei has introduced new functions such as Huawei MeeTime and Multi-Window, along with enhancing the capabilities of the already existing Multi-Screen Collaboration. Users will also notice significant changes in the fundamental user experience design while seeing improvements in performance and security.

EMUI 10.1 is designed based on the principle introduced in EMUI10 – Beyond Beauty. New additions and improvements made in this version optimise user experience to further the benefits of the distributed ecosystem.

With EMUI10, Huawei launched Always on Display (AOD) with vibrant colours that reflected the changing hues of the sky. Now EMUI 10.1 presents 3D Rendered Always-on Display that separates digital figures from the background in a multi-layer construct, offering a captivating three-dimensional experience to the user. This feature will be rolled out to more devices in this update. (*The availability of this feature may vary according to models)

Users will also see three fingerprint unlock animations on EMUI 10.1. Inspired by the elements of earth, fire and water, these animation effects look immersive and riveting.

Swiping inwards from either side brings out a sidebar from which apps can be dragged out, initiating the new Multi-Window functionality. Users can work on two apps simultaneously – drag and drop images, text, and files from one to the other on the very same window. Besides, floating notifications make it easy to respond to messages without having to exit from the current app.

To ensure that the scrolling animation looks smooth and natural to the human eyes, Huawei has added the new Friction Slide based on the laws of Physics. As a result, the scrolling action functions with optimum acceleration even at varying refresh rates, allowing users to enjoy a super smooth experience while reading an article or browsing a website.

Another testimony to EMUI 10.1’s unrivalled innovation is Huawei MeeTime, the powerful all-scenario video calling application. Among its many capabilities is full HD video calling up to 1080p between Huawei devices in all scenarios: while Huawei’s Facial Recognition technology ensures subject clarity in low light conditions, the Super Resolution algorithm compensates for low-image quality even when the signal reception is poor. With this application, users can also share their screens with one another and mark-up areas should the need arise during a discussion.

Huawei MeeTime is built on the distributed ecosystem, allowing it to connect with third-party devices such as the DRIFT action camera in such a way that the external camera becomes an extended camera of the smartphone itself. Users will find great benefit in this cross-device connectivity when they wish to share a live sport or stream a live concert during the call. HUAWEI MeeTime is initially launched in China, Malaysia, Thailand, Philippines, Singapore, Indonesia, Saudi Arabia, and South Africa will be rolled out in more countries later this year.

Huawei Share is better than it has ever been. Originally introduced to enable high-speed data transmissions between smartphones and PCs, this feature can now facilitate transfers between 1+8 devices including smartphones, PC, smart speakers, tablets, and more.

Introduced with EMUI10, Multi-Screen Collaboration facilitates interconnectivity between Huawei smartphones and laptops such that both devices can be used on a single screen. EMUI 10.1 brings enhanced capabilities to this application such as picking up audio or video calls on PC, using PC applications to open files and hyperlinks on the smartphone, or even using the phone’s cellular internet connectivity on the PC with a single tap. This seamless collaboration between screens will enhance the productivity and efficiency of users, especially in an office set up. 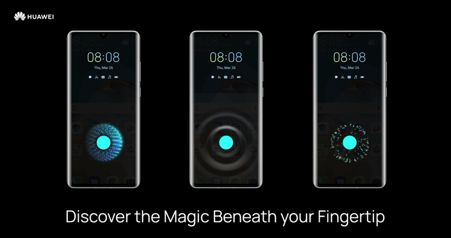 To benefit from the all-scenario capabilities of EMUI 10.1, users may check for eligibility by going to Settings > System & Updates > Software Update on their devices, or go to Support (HiCare) App > Quick Services > More > Update to get the update in advance.

Would you buy or build a house?

Last month, the African Union launched the Africa Medical Supplies Platform to facilitate the production and provision of vital medical equipment – the latest...

The West African Insurance Company Association (WAICA) secretariat based in Accra, Ghana, has announced the cancellation of the 2020 WAICA annual general meeting and...

Newmont Ghana’s Ahafo Mine has donated Personal Protective Equipment (PPE) worth GH¢77,460 to the Regional Hospital in Sunyani and St. Elizabeth Hospital at Hwidiem...

Webinar on asset and wealth management comes off successfully

Fidelity Bank in partnership with Fidelity Securities Limited held the second edition of its thought leadership series, Fidelity Presents…with a focus on asset and...

Africa’s leading Beverage giant, Kasapreko Company Limited, has outdoor Puma Drinks - an addition to its growing range of products. The product was launched in...

No dividends, as banks struggle to raise GH¢400m

Procurement officers must be licenced—PPA Board Chair