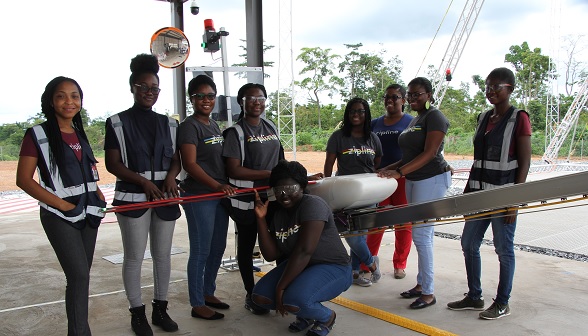 More of an admiration and praise rather than stereotype, in the technology/engineering space regarding women, the opinions of cross section of ladies driving the Zipline drone technology in Ghana.

In spite of this assertion by the ever ingenious ladies, Belinda Parmar, author of ‘Little Miss Geek’ could not have put it more aptly especially in the Western world; the technology industry is still struggling to shake off the image of the male, pizza-guzzling, antisocial nerd – a perception that initiatives like this month’s Ada Lovelace day – which celebrates the role of women in technology – and Lady Geek’s “Little Miss Geek” campaign, are striving to change.

PwC’s study goes on to reveal that the gender gap in technology starts at school and carries on through every stage of girl’s and women’s life. A lack of female role models also reinforce that a technology career is not for them.

There is no doubt that tech is overwhelmingly male. However, on the Accra-Kumasi road is nestled Omenako, a town that houses Ghana’s first distribution center.

This notion of male dominated technology enterprise has been thrown out the window, given that core staff particularly the flight operators – predominantly females outnumber the males in the line of work.

With a ratio of 10: 8 women and men respectively, Zipline is leading the way to demystify that perception, by giving more opportunities to women and also promote women in technology.

These ladies whose ages ranges from 22- 30 years are enthusiastic about their work, not only as an employment but to get into a sector or field to effect change and bring innovation.

Some contend that they have being passionate about technology whilst others were spurred on by friends to venture into the tech space.

For flight operator, Josephine Fianu she developed interest in science and technology during her time at the secondary “I loved physics and it was a true reflection of what I wanted, the biology I was struggling- it was the one I was learning most but I was not doing well, yes the physics I don’t struggle because the teacher has introduced a concept and with a little understanding I apply it in every word problem, so I will say that is where my motivation came from”she told B&FT.

But when I got to university, I looked at where my interest was and I think that is where my motivation for engineering started and also, I feel that women are underrepresented in engineering”.

Zipline, is the world’s first national-scale drone delivery service provider. The company through its services is expected to use drones to make on-demand, emergency deliveries of life-saving medications to over 2,000 health facilities across the country.

Inspiration from friends sparked interest in engineering, according to Ethel Annyaah, a flight operator, her views were also echoed by some of her colleagues who reckon ladies in technology have  come to stay.

The tech industry is one of the most competitive, but also full of opportunities for women, even though admittedly these ladies at Zipline admit that there are no balance at the moment, explaining that if there were balance, it will breed variety of ideas which will enhance the tech space.

Not in the masses but the value

Another school of thought also reckons technology is not really about gender but it has to do with having the personnel with innovation, creative thinking, all developing into a broader spectrum will help.

When ideas are pooled it helps, the constraints in the past as identified by the some of the ladies has to do with cultural background, tradition and “even the engineering did not look interesting- you see that they do all the dirty work and no lady wants to find herself doing such work, but I think over the years through programmes and NGO’s, you get companies sponsoring ladies in Science,Maths and Technology, it has helped bridged that gap”. Josephine Fainu added.

Furthermore, some were also of the view that there are some ladies who want to venture into technology but are scared of the pain, stress and challenges that come with it.

Companies now, believe in diversity, which it drives productivity as opposed to the under representation in the past- and the realization now is that bringing more women on board will help with the progress of the firm.

On the profitability of the engineering enterprise, they chose, the ladies maintain that it boils down to passion and that if one is not passionate, no amount of money will make you content.

“I believe technology is evolving and changing everyday, and the world’s problem is changing everyday, so if you are a woman and you have that passion to solve problem on a daily basis as they evolve- so far as you are solving or giving solution to something, money will come to you, so it goes hand in hand”Eseme Atsufe Kwasitsu, a fulfillment operator said.

The Zipline drone innovation has not only taken off in Omenako but snowballed to school kids who paid official familiarization tours to the site to witness at first hand the workings of the device and entire service.

During a recent visit, section of the school kids from selected basic schools in Omenako said they have been mightily inspired to take up courses in engineering particularly given that most of their tour instructor were females.

“I was very excited to see the ladies handling these devices and it has encouraged me to want to become an engineer in future” Sarah Obeng, a JHS student said.

Zipline’s drone delivery service is dedicated to expanding healthcare access and saving lives around the globe. Health workers place orders by text message and receive their deliveries in 30 minutes on average. Zipline’s drones both take off and land from its distribution centers, requiring no additional infrastructure at the clinics it serves. Deliveries are made from the sky, with the drone descending to a safe height above the ground and air-dropping medicine by parachute to a designated spot at the health centers it serves.

The company’s drones criss-cross commercial airspace daily over both remote and populated areas on their way to deliver critical and lifesaving medicine to people in need, the safety and reliability of Zipline’s service is a top priority. 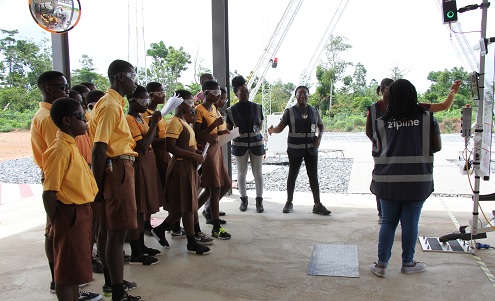 In a message to aspiring engineering students, Georgina Wilson, a flight operator coordinator could not have put it more appropriately “solving problem are always fulfilling to each individual. Changing your focus will change how you feel about engineering. So focus on the achievement and end results, and you will feel courageous enough to make it”

The drone makes 600 deliveries daily and also have the capacity to save 600 lives – especially mothers and children.

The Zipline distribution centre at Omenako in Suhum is the first of three sites which are expected to house the drones and provide vital medical supplies.

It serves the Eastern Region, some parts of the Volta, Ashanti and parts of Greater Accra; and subsequently, similar distribution centres will be put up at Mampong and in the Northern Region.

The Ministry of Health has selected 148 lifesaving medical products to be stocked at Zipline’s four distribution centres nationwide. Zipline will guarantee delivery of those products upon request to at least 1,500 health facilities served.

The deliveries of about 150 medical supplies, which include blood, blood products, and vaccines among others, will serve nearly 2000 health facilities across the country at full capacity.

The company has already delivered two rounds of vaccines to the New Tafo Government Hospital in the Abuakwa North district of the Eastern Region by drones in a test run ahead of yesterday’s inauguration to check its readiness.

The drones delivered two rounds of vaccines from the Omenako Centre to the New Tafo Hospital — a distance that takes more than an hour to cover by road — in just 15 minutes. 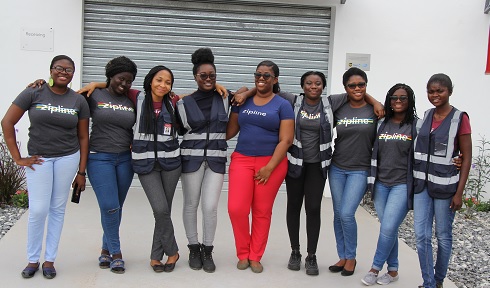 Throughout all this, Zipline have shown the way in the area of promoting opportunities for women to thrive in engineering, it behooves on enterprising ladies to be sparked to take up engineering to erase the perception that it is a male dominated endeavour.

Gov’t moves to convert power component of institutions to solar next...