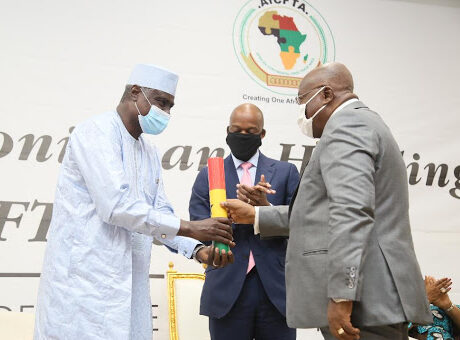 As the timeline for the implementation of AfCFTA approaches, a series of engagements to apprise stakeholders what is in store for them has been held throughout the week.

The latest to comment of this landmark trade deal is the Minister of Trade and Industry, Alan Kyeremanten who has given every indication that the country to take full advantage of the continental trade deal.

The Minister indicated that the government has rolled out the necessary structures capable of facilitating the take-off of the deal, come January 2021. He stated that a national steering committee is coordinating and guiding the support that will be given to the private sector.

He expressed optimism that the trade pact has the potential to lead to the rapid increase in the exchange of agricultural, industrial, financial and scientific products which would greatly enhance the country’s economic fortunes.

That is the thinking behind the whole enterprise, that is, to ensure that through free trade, the standard of living of the African peoples would be improved while ensuring that intra-African trade, which is abysmally low, is enhanced to the betterment of the African economy as a whole.

The Association of Ghana Industries (AGI) is also excited about the prospect of a bigger market but are worried about the capacity of Ghanaian businesses to compete, particularly as there are some economic giants like South Africa and Nigeria who they believe would have a larger market share.

That should not be a disincentive to Ghanaian businesses since it would stimulate our competitiveness and force us to adopt good market practices in order to remain relevant. Some of the SMEs believe the more productive economies will dump their products in markets like ours and price out their products.

Most of these fears are genuine and borne out of real concerns but as the Trade Minister has assuaged such fears by saying structures are in place to address all the concerns. He also mentioned a clause in the pact which allows countries to exclude some products they consider sensitive to the growth of their economies from free tariffs etc.

All in all, we are confident that Ghanaian businesses will be frontline actors in the continental free trade area as admonished by President Akufo-Addo. As the market is being expanded, apprehensions are bound to set in but we will definitely scale the course.