Report of some so called Ghanaian journalists having been deported from Australia has led to a probe by the Government. At least 50 Ghanaians who form part of that contingency are to face the national security lead probe. This is not the first time sports men have tarnished the image of Ghana. According to a report on mynews.com.gh, in 2009, Team Ghana presented some 25 footballers who had no hearing or speech impairment as ‘deaf and dumb’. Some players in Ghana’s deaf and dumb team representing Ghana in Australia were caught to have perfect hearing and speech capabilities after they were seen singing and dancing to ‘jama’. The story goes on to say that during the game, a player unconsciously, shouted on his team mate to mark another player. As to whether there was ever a probe into that earlier story and the outcome; your guess is as good as mine.

Internationally, government is working hard to create a good image of our country, aimed at attracting tourists and Foreign Direct Investments into the country. These kinds of happenings really tarnish the image of Ghana and we cannot allow greedy self-seeking Ghanaians who don’t care about the negative image they create to continue perpetuating such acts. Any negative news about Ghana affects the image of the country. The image of a destination is one of the key factors tourists take into considerations before deciding to visit. Therefore every positive news about Ghana affects us all and vice versa. The Ghana Journalists Association (GJA) has “distanced itself” from the 50 deported ‘Ghanaian journalists’

A statement signed by Affail Monney, President of the GJA, said none of the said persons is known to the Association neither are their media outlets. Meanwhile the Australian High Commission has confirmed that the Australian Border Force (ABF) cancelled the visas of several dozen travellers from a variety of countries, including Ghana, who attempted to travel to Australia posing illegitimately as journalists, athletes or officials. In the case of Ghana, officials of the Australian Border Force were reportedly not convinced about their reasons for travelling to the country or their claims of being journalists. “While this situation is regrettable, anyone wishing to enter Australia, including athletes, team officials and the media, must hold a valid visa and accreditation and must be deemed to be a legitimate visitor,” “The ABF is working hard to ensure smooth entry for legitimate Commonwealth Games visitors And for a safe and secure Games.

The multi-dollar question is, what are the circumstances under which  a traveller with a valid and genuine visa can be deported. Many Ghanaians do not understand the process of applying for a visa and the reason why forms are filled and in some cases why applicants must be interviewed and why immigration officers will again interview arriving tourists with valid visas before allowing them passage into the country.

Before a person travels to any country, the individual needs to first own a passport and proceed to obtain a visa. This are internationally required standards and it is needed because countries would like to have an organised accounting system of people leaving and entering their territories mostly due to security reasons and for tourism statistics. This is best explained in the movie ‘The day of the Jackal’. In these days and era where terrorism is on the increase, it is not a bad idea to really implement these measures.  A passport is another essential official document a citizen of a country is required to have and is issued only by the passport office in Ghana. Whiles filling a form to own a passport, many questions are required to ensure you really are a citizen of the land added to the documents to be provided. The passport office is under the ministry of foreign affairs. In other countries, they fall under the Home Office or State Department. Passports despite looking different in terms of design and colour do all share a basic internationally ratified format. The numbering and codes and security features are usually adopted by all countries. This makes it easier to understand whatever is written, and be able to identify fake ones. A citizen passport is not just registered in your country but also in another international database shared only among governments.

A visas, is a type of permission which permits the bearer of a passport to enter, study, work, do business, be a diplomat etc in another country. Visas have also a similar international layout so that other countries can read and understand such visas. There are also visas on arrival that are issued by some countries as means of promoting tourism by easing the application process for visas. Majority of Ghanaians travelling to most of the developed countries need to apply for a visa. There are however some countries where Ghanaians do not need visas before travelling to. Before acquiring a visa, an applicant will have to fill a form and provide many supporting documents to ensure his/her visa is granted.

Each application requires a specific type of visas. The categories mostly include, study visas, tourist, business, medical etc. Some visas do give you the same rights as a resident or a citizen. When applying for a visa, if a consular is not convinced of your personal circumstances, and intentions, a visa will be denied. The information provided when applying for a visa will include your current profession and proof of employment, pay slips and bank statements etc. Other information relating to your family, address are also required including your past travel history etc. In the case of the ‘deported Ghanaian, one will want to know which media houses provided them with introduction letters and pay slips. For how long did they work with these media houses? Since the Ghana Journalist Association has already disowned them, it means the investigation must unravel how they were able to provide introduction letters introducing them as journalists.  If they were not journalists, how where they able to provide statements of accounts to proof that they could afford to finance the trip and that they will not be stranded.

What happens after a visa has been issued?

Once an applicant has been granted a visa, an air ticket is acquired and the traveller departs. However, a pre-issued visa is not an entry permission but a permission to travel to a port of entry and request that permission. Therefore, upon arriving in the foreign country, the immigration officer will not ‘override the embassy’s decision’ but rather ‘come to a different conclusion in their own decision’. For example, on the United States CBP website it says; issuance of a visa does not guarantee entry to the United States. A visa simply indicates that a U.S. consular officer at an American embassy or consulate has reviewed the application and that officer has determined that the individual is eligible to enter the country for a specific purpose. The CBP Officer at the port-of-entry will conduct an inspection to determine if the individual is eligible for admission under U.S. immigration law. According to foreignborn.com, all persons arriving at a port-of-entry to the United States are inspected by officials of the U.S. Government. There are four separate inspections: Public Health, Immigration, Customs, and Agriculture. You may talk to one official who does all four inspections, or you may talk to more than one official.

When arriving at a US airport from outside the US, the airline will give all non-United States citizens a form to complete while still en route to the United States, either Form I-94 (white), Arrival/Departure Record, or Form I-94W (green), Nonimmigrant Visa Waiver Arrival/Departure Form. The forms ask for basic identification information and the address where you will stay in the United States. Upon arrival, the airline personnel will show you to the inspection area. You will queue up in an inspection line and then speak with an Immigration inspector. You will then proceed to the Customs inspection area. If you are a foreigner, the Immigration inspector must determine why you are coming to the United States, what documents you may require, if you have those documents, and how long you should be allowed to initially stay in the United States. These determinations usually take less than one minute to make. If you are allowed to proceed, the inspector will stamp your passport and issue a completed Form I-94 to you. A completed form will show what immigration classification you were given and how long you are allowed to stay. If you are an alien, the Immigration Officer may decide that you should not be permitted to enter the United States. There are many reasons why this might happen. You will either be placed into detention, or temporarily held until return flight arrangements can be made. If you have a visa, it may be cancelled. In certain instances, the inspector may not be able to decide if you should be allowed entry into the United States. In this case, your inspection may be deferred (postponed), and you will be instructed to go to another USCIS office located near your intended destination in the United States for further processing.

It’s obvious that these 50 ‘Journalists’ did not understand the processes involved in entering a country upon receiving their visa. The US embassy recently came out to say that many Ghanaians are denied entry into the US even though they processed valid visas and provided statistics to buttress their point. Whiles we await the outcome of the probe, it important that measures are put in place now to prevent these kinds of situations occurring in the future.
Philip Gebu is a Tourism Lecturer. He is the C.E.O of FoReal Destinations Ltd, a Tourism Destinations Management and Marketing Company based in Ghana and with partners in many other countries. Please contact Philip with your comments and suggestions. Write to forealdestinations@gmail.com / info@forealdestinations.com. Visit our website at www.forealdestinations.com or call or WhatsApp +233(0)244295901/0264295901.Visist our social media sites Facebook, Twitter and Instagram: FoReal Destinations. 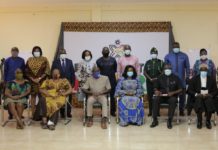 Huawei sues the US gov’t for unconstitutional sales restrictions imposed by...