Home Business Agribusiness Defunct Kona Agro Processing to bounce back …as it secures a... 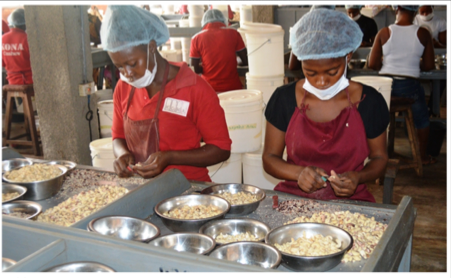 Kona Agro Processing Limited, an indigenous cashew processing company at Awisa near Wenchi in the Bono Region, has entered into a joint venture with Australian Dried Fruits and the Nuts Trading entity to scale up cashew processing in the country.

The transaction involves establishing a new 10,000 metric tonne (MT) processing plant. The initial processing capacity will be 5,000MT, rising to 10,000MT by the third year of operations.

The Australian firm will provide funding for capital investment and all the working capital required to purchase the raw cashew nuts (RCN) for processing. The Ghanaian partners, [Kona Agro processing Ltd.] on the other hand, will provide funding for the capex as well as the technical capacity required to source and process RCN. The team will be complemented with a technical team from Vietnam.

The investment is estimated to create 500 direct jobs in the first year, and increase to 1,000 in the subsequent years when production hits 10,000MT. The workforce is envisaged to be 80 percent predominantly women employees.

The Managing Director of Kona Agro processing Ltd., Raymond Kojo Opoku Taylor, disclosed this to the B&FT. He said all other things being equal, the revived company will commence operation in the 2021 cashew season. However, COVID-19 restrictions remain the major challenge that could delay commencement of operations, he added.

Kona Agro Processing Ltd. is the first indigenous cashew processing company, starting operation in 2008. Unfortunately, the company shut down in 2015 due to varied reasons such as unhealthy competition from exporters for RCN and high utility and operational costs. Many other cashew processing companies in the country have also shut down. The few that are currently in business produce below their optimal capacities.

“This venture means that capacity to process and export cashew kernels has not diminished. It also proves that with the right partners, strategic alliance and support from the government, cashew processing and agribusiness in Ghana can be promoted and expanded.

“It also provides confidence and belief to farmers, workers and other stakeholders in the cashew value chain that the industry is here to stay. This especially so in the COVID-19 period, when the cashew supply chain is facing serious disruption due to the lockdown and associated problems,” he said.

Mr. Taylor opined that the need to scale up processing has working capital implications which are extremely difficult to surmount, adding: “The primary expectation from processors is for government to provide a framework to support the industry through support for farmers to produce high quality RCN.

“The support from government can be achieved through the introduction of an export levy on raw cashew nuts – as is the case in Ivory Coast and Benin and other cashew-exporting countries. Proceeds from the levy can be used to support farmers and processors, and will also encourage local processing. As it is now, India – the largest consumer of cashew kernels globally – imposes a levy/tax on imported cashew kernels to discourage the import of cashew kernel, and by so doing protects their cashew processors.

“Indian processors, on the other hand, import raw cashew nuts from Ghana and other west African countries for processing in India. The introduction of an export levy will level the playing field,” he suggested.

The increasing mechanisation of cashew processing, he indicated, has made it necessary for operators to process volumes in excess of 3,000MT to render the investment profitable. “The working capital required to process 3,000MT of raw cashew nuts is approximately US$3million. This is usually multiple the balance sheet of the processor, making it very difficult for processors to raise money from traditional sources such as banks or funds.”

The cashew industry has gone through a transition from the labour-intensive processing methods predominant in India which were promoted by Technoserve in Africa ten years ago, to the mechanised processing methods as practiced in Vietnam – which is now the world leading exporter of cashew kernels.

We have not abandoned old projects – Health Minister

500 Odorgonno students forced to use 3 toilets

A new era for the administration of financially distressed companies has been introduced in Ghana under the recently passed Corporate Insolvency & Restructuring Act,...

For many Ghanaians financial concerns are a regular source of anxiety, which is understandable given the uncertainties of today’s economy. The majority of Ghanaians...

The World Health Organization's chief on Monday slammed some government leaders for eroding public trust by sending mixed messages on the coronavirus and warned...

The COVID-19 Private Sector Fund, in collaboration with the Ghana Psychological Association, has trained over 280 security personnel as part of the fund’s initiative...

Those who thought that a pandemic would make everyone realize the crucial role of care workers should think again. With the coronavirus still spreading...