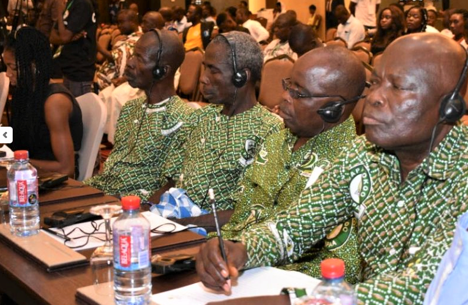 In a statement, Caitlin Horner, Divine Chocolate spokesperson said: “We are delighted that Weinrich, under its CEO Cord Budde, is now a key shareholder and are fully committed to our mission to empower cocoa farmers and chocolate lovers by delivering seriously good chocolate.”

She added, “Mr Budde and his company have proved to be exceptional partners to Divine: not only developing and producing all our delicious chocolate flavours, but visiting farmers, hosting Kuapa Kokoo in their factory, building a schoolhouse to add to a school built by Kuapa, investing in establishing Divine USA, and helping in many ways to build our business. We are genuinely excited about what the future holds for the company.”

Divine Chocolate, a very prominent Fairtrade chocolate brand, was founded in 1998 with Ghana’s Kuapa Kokoo, a founding shareholder, owning 33% shares. Shares of the Ghanaian cocoa farmer cooperative increased to 45% in 2007 when a fellow founding shareholder, The Body Shop, handed over its shares to Kuapa Kookoo, giving it the majority stake.

The new owners of Divine Chocolate, Ludwig Weinrich GmbH & Co. KG (Weinrich), are however not entirely new to the British business. Weinrich has been manufacturing Divine’s chocolate in Germany from the inception 22 years ago up till now and very much understands the business’s model and social mission.

The company has not disclosed how much was involved in the transaction, but said in a response that Divine was in a position, like many businesses at present, where it needed external finance and the change in ownership structure allows the business to have access to this finance to continue its operations and grow the business.

Kuako Kokoo cooperative has been assured they would still have “40% influence” on the company’s board, adding “the objective and goals of Divine will not change and therefore “we do not believe the change in our ownership should have an impact on the fundamentals of the business with respect to Fairtrade, B-Corp and being a social enterprise.”

Divine Chocolate was established in 1998 after the farmers of the Kuapa Kokoo cooperative voted at their 1997 Annual General Meeting to set up their own chocolate company. The cooperative which has a membership of almost 100,000 farmers, is said to have ensured farmers are put first and at the centre of all decision making.

Divine Chocolate buys all of its cocoa on Fairtrade terms and has committed to investing in farmer-led programmes, particularly focused on improving and adapting farming techniques, empowering women, and supporting good governance. The farmers-owned chocolate company is not only a Fairtrade leader but also a multi-award-winning social enterprise, a high scoring B Corp, with a brand sold around the world.

Are you measuring your business’ Customer Effort Score (CES)?

Ebenezer Asumang on the Future of Banking … COVID-19: A catalyst for digital transformation...

Last month, the African Union launched the Africa Medical Supplies Platform to facilitate the production and provision of vital medical equipment – the latest...

The West African Insurance Company Association (WAICA) secretariat based in Accra, Ghana, has announced the cancellation of the 2020 WAICA annual general meeting and...

Newmont Ghana’s Ahafo Mine has donated Personal Protective Equipment (PPE) worth GH¢77,460 to the Regional Hospital in Sunyani and St. Elizabeth Hospital at Hwidiem...

Webinar on asset and wealth management comes off successfully

Fidelity Bank in partnership with Fidelity Securities Limited held the second edition of its thought leadership series, Fidelity Presents…with a focus on asset and...

Africa’s leading Beverage giant, Kasapreko Company Limited, has outdoor Puma Drinks - an addition to its growing range of products. The product was launched in...