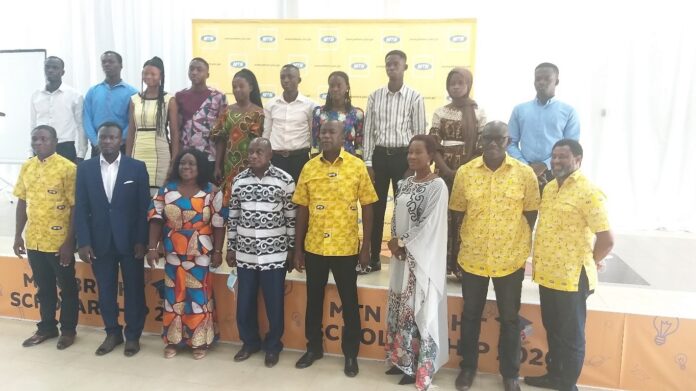 The MTN Ghana Foundation in its quest to make impactful interventions that drive value in the communities and the country as whole has awarded educational scholarship to fifty deserving tertiary students within the northern and the middle belt of Ghana at the Kwame Nkrumah University of Science and Technology in Kumasi.

In all, the Foundation has this year awarded one hundred scholarships who come from 21 public tertiary institutions in the country with the first fifty batch of awardees of the MTN Bright Scholarship representing the southern sector earlier administered in Accra.

The scholarship caters for their tuition, accommodation as well as a stipend to purchase books and other essentials for their education irrespective of the programme the student is offering.

In all, the Foundation received one thousand nine hundred (1900) applications this year from all the sixteen regions and one hundred and eighty-four students (184) were shortlisted for interview.

Out of that number, one hundred students were selected by judges who came from academia and human resource expertise.

Addressing the scholarship awardees and other stakeholders at the presentation ceremony in Kumasi recently, the Corporate Services Executive of MTN Samuel Koranteng said three years ago, the MTN Ghana Foundation made a commitment to transform the lives of 300 students through the MTN Bright Scholarship.

The launch of MTN Bright Scholarship in 2018 was a fulfillment of the commitment MTN Ghana Foundation made to Ghanaians in 2016 during the commemoration of Scancom PLC’s 20th Anniversary.

According to him, the process for selecting the 100 awardees was a tough one and therefore took the opportunity to commend the entire team especially the panel of judges who have worked tirelessly to bring this dream to a reality.

Mr Koranteng also disclosed that since the inception of the scholarship scheme, they initially noticed low applications for females and persons with disabilities. In the first year, 18% of successful applicants were females.

Mr Koranteng was however happy to announce that in the course of the three-year period, the Foundation has provided relief to a lot of parents who had the burden of looking for funds to support their children’s education.

Furthermore, during the interviewing process, they came across first class students who had to undertake menial jobs to enable them to finance their education. For some, whilst their colleagues were having lectures, they were out fending for themselves and this scholarship scheme indeed has brought a great relief for these students.

In an address the Ashanti Regional Minister, Simon Osei Mensah who was the guest of honour at the award ceremony commended MTN for this social intervention and its significant impact particularly in supporting education.

He congratulated the awardees for being selected out of one thousand nine hundred applicants for this competitive award scheme. He further advised them to capitalize on the opportunity and take their academic work very seriously to worth the support.

Ebenezer Asumang’s thoughts Future of Banking …Banks and SMEs relationship is critical in...