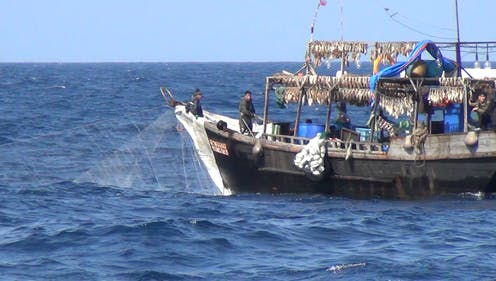 This abuse of the crew goes hand-in-hand with threats, bribery of fisheries observers, and large-scale illegal fishing.

The testimonies, documented in a new report and film from the Environmental Justice Foundation (EJF), are a deeply troubling indication of the treatment of local crew on board Chinese-operated trawlers which are ubiquitous along the West African coast.

Although it is against Ghanaian law, the vast majority of trawlers operating in Ghana – an estimated 90% – are owned by Chinese corporations that use Ghanaian ‘front companies’ to gain registration. Chinese nationals occupy the more senior positions on board the vessels, with Ghanaian crew in lower roles.

All 10 Ghanaian crew interviewed by EJF had personally experienced or witnessed physical abuse at the hands of Chinese captains and officers. One man said: “Violence occurs all the time. Those who are not fast, the captain will take anything he can get and hit you with it. Whether a stone or anything they get their hands, especially the captain”.

On another vessel, a Chinese national allegedly used a basket to hit a Ghanaian crew member on the head. When he retaliated, the Chinese officer is alleged to have threatened him with a knife. This treatment is combined with gruelling working hours said the men, stating that sometimes they are not allowed to sleep at all in 24 hours.

Living conditions on board are also appalling, the men testified. They are not allowed to sleep in cabins where the Chinese crew sleep, but must stay on deck under makeshift tarpaulins. The water they are given to drink is often filthy and sometimes makes them unwell. One man said: “The tank we drink from is very dirty and rusty, but we still drink from that same tank…Sometimes after drinking the water, we suffer from stomach pains, vomiting and diarrhoea”.

Abuse of the crew was matched by aggression toward fisheries observers, in a bid to silence them and prevent reporting of widespread illegal fishing. The three observers interviewed by EJF reported incidents such as a captain threatening to hit an observer with a metal bar, when he was found trying to preserve evidence of illegal fishing. In another case, a captain threatened an observer with a knife when he tried to prevent juvenile fish from being dumped at sea. All the crew and observers EJF interviewed stated that the vessels they work on engage in illegal fishing practices.

In addition to the appalling conditions reported on board, none of the crew members interviewed had entered into written contracts; and some stated that they either were not told their wages at all or were given a fixed sum regardless of how long the trip took. Companies also make deductions from wages that are not agreed to in advance, said the interviewees.

There is currently no union in place to protect the interests of crew members working aboard industrial trawl vessels. Some crew members believe there is active suppression of such access to collective bargaining, and say they were fired or blacklisted following their move to form a trade union.

Along with swift action by the Ghanaian government to crack down on these abuses and prevent vessels from registering and fishing illegally, it is imperative that businesses – including seafood importers in the EU and other major markets – immediately scrutinise their supply chains, says EJF’s report. In accordance with the United Nations Guiding Principles on Business and Human Rights, they must implement effective due diligence and adopt a zero-tolerance approach to human rights abuses.

Executive Director of EJF Steve Trent said: “The Ghanaian government cannot ignore the abuse of its own people. Ghanaian workers are suffering because Ghana’s fisheries are out of control, with no effective crackdown on the abuse of crew or the rampant illegal fishing; and no transparent process to secure prosecutions, convictions and impose meaningful deterrent sanctions.

“We call on government to immediately launch an official and independent investigation into allegations in this report, and take the necessary actions. In addition, the Fisheries Commission should fully investigate ownership before licencing vessels; and ensure licences are withheld or withdrawn from vessels with poor human rights and illegal fishing records, or where the beneficial owner is not Ghanaian.”