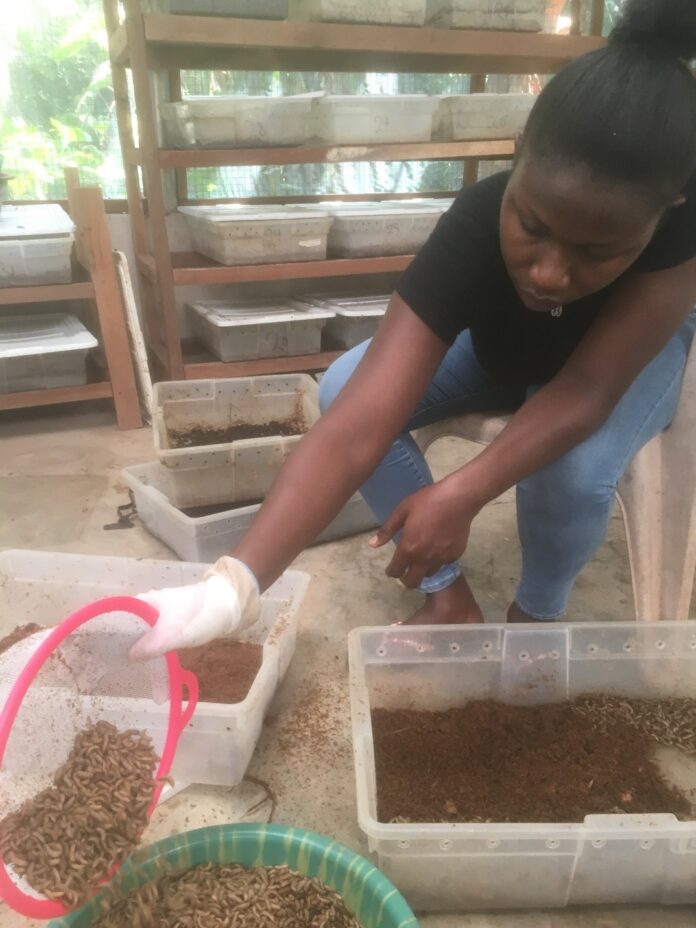 It is rare to see young people engage in works that many of their colleagues consider being physically ‘dirty’. Today’s youth are most interested in acquiring a degree and getting a job that will put them in an airconditioned office. But that is not what a young lady called Rose wanted. After senior high school where she didn’t pass some of her subjects, she didn’t give up in life but decided to enter into an industry that is not common to many – making protein from black soldier larvae to make fish and poultry feed. Read as she talks with the B&FT’s Inspiring Startups about her journey.

Rose Serwaa Oduro is a senior high school graduate who is currently taking an online course in psychology. She grew up in Koforidua in a very humble home. Her mother and father operated a local food joint popularly known in Ghana as ‘chop bar’. When she completed the Koforidua-based SDA Senior High School in 2014, her mathematics was bad and so she couldn’t progress to a tertiary institution that year. Rather than stay home and try her chances with private exams, she decided to take short programmes which could give her a job to do.  She went to an aviation school and studied ticketing and reservation, and passenger handling. Later, she got a job with a travel and tour agency. It was in this company that he met the man, Emmanuel Noah, who would later become a co-founder of her company.

The start of West African Feeds 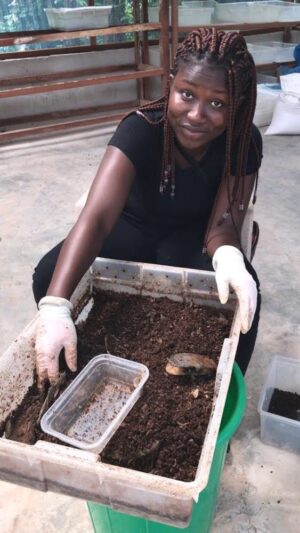 Emmanuel had earlier left the travel and tour company to venture into something else. Along the line, he chanced on a nice business idea which he didn’t have time to pursue so he discussed with Rose to see if she would be interested to take it up. The idea was about an alternative to a fish meal using black soldier fly larvae. She started reading wide about the idea and making market research to see if it will be feasible. After convincing herself that it is a good business idea, how to start also became a problem as she had no capital. But that didn’t discourage her. She applied for a grant at the Innovate Gh programme in 2019 and emerged the winner. So with the grant, the startup started operating.

Currently, the business is focused on extracting proteins from the black soldier fly larvae and supply them to companies that prepare fish and poultry meal. In the production process, first, the insects are trapped from the wild or domestically bred from decayed foods. Then they are transferred to a cage and later kept until they lay eggs and are hatched. These eggs later develop into larvae and they are used as protein for fish and poultry meal. From initially operating from a small bin at home, the business has now grown to own its farm in Accra where production takes place.

In the next five years, West Africa Feeds wants to grow to become a very large company that will supply all fish and poultry meal enterprises with protein from the black soldier fly larvae.

One of the challenges that she is daily confronted with is access to food waste. Aside from a few businesses which have agreed to supply her with food waste, sometimes, she has to move from one food processor to another before she could have access to raw materials. When that happens, transporting it to her farm also becomes a very daunting task and expensive as well.

Even though Rose has no higher education yet, she does not allow that to intimidate her. For her, once she can read and write English, it is enough for her to communicate with others and understand the language of business.

The role of GCIC

Rose says the Ghana Climate and Innovations Centre (GCIC) has played a very crucial role in her business development. The organisation has taken her through managerial training and educated her on how to run a sustainable business. She has been linked to a portfolio manager who assists her to address the knowledge and skills gap.

How important is the economic empowerment of women?

How should government support entrepreneurs?

“I will tell young entrepreneurs not to give up easily. The journey can be very lonely but be positive about the future and work hard and you will get there. The journey can either be easy or difficult depending on what resources you have available and the knowledge you have about what you are doing. But don’t give up when challenges come.”