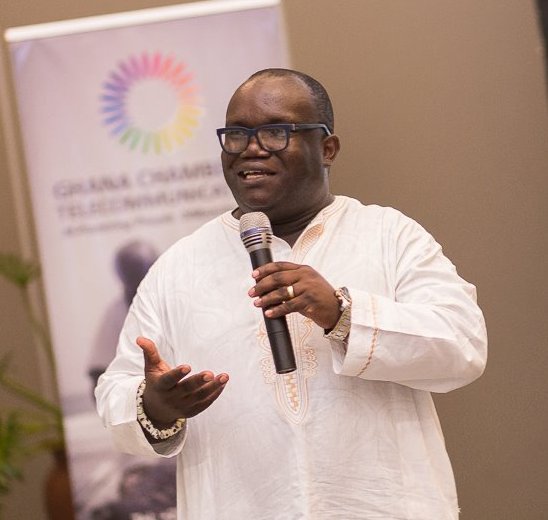 Kenneth Ashigbey, the Chief Executive Officer of the Ghana Chamber of Telecommunications, has graced the Y Leaderboard Series on Y 107.9 to share insights on his leadership journey.

From his upbringing, career, family life and learnings in life, Kenneth dropped bits of inspiration to the avid listeners of the show. Opening up on his childhood, Kenneth told Rev. Erskine that after losing his dad at a tender age, his mum did everything possible as a single mother to set him on the path to engineering.

Commenting on his school life, Ken Ashigbey disclosed, however, that his involvement in numerous extracurricular activities almost put him on a different career path. According to the Electrical Engineer, his involvement in his school’s cadet set him on the path of a military man until his mother intervened.

“I have been involved in everything. I didn’t just go to school to learn books. I was a mass server in school and loved the cadet. One of my ambitions was to be in the military but my mother didn’t want me to.”

Ken who is an old boy of the St Augustine’s College noted that he was a member of the school’s cadet from Upper One to Upper and would have easily transitioned into the military if his mother had allowed him. “I have people I trained with in the cadet now in the military with some being Colonels and others being Lieutenant Colonels. I would’ve been a colonel or something by now,” he reiterated.

As a leader, Kenneth shared one of his cherished principles about leadership. He explained his principle by employing military terms when it comes to leadership.

He told Rev. Erskine, “My philosophy for leadership is a general who leads right from the front. I go to battle with my MCOs and officers and make sure we leave no one behind. But I have to be at the very forefront. Some leaders who will be in the green room plan it and move the buttons from the green room but I am different. I will be at the very forefront so I am sure in all the places.”

He further shared evidence of the impact of his leadership style on others by stating that everyone he has worked with will attest that he is a “people’s person”. “I love working with the people. It is what gives me comfort and when I am stressed, once I am in the middle of people I am cool,” he added.

He further emphasized on the importance of apprenticeship when he related his own example of how he learnt from great leaders and eventually became successful in the media space.

“Anybody I reach out to, I try to learn a thing or two from and one of the things I advise young people about is that apprenticeship is very important. Mentorship is very important as well. I did not go to school to study communication, journalism or media management but I learnt that as an apprentice at the feet of people who really have done great things and in the process doing it and doing it well.”

Kenneth expressed further that family is very important in attaining success. In this instance, he enthusiastically praised and appreciated his wife, Priscilla Ashigbey, for all the support she has given to him as he describes her as the ‘Governor-General’ in their home.

He mentioned that apart from his wife and children, his mother and siblings also show immense support to him. Kenneth says of how he reciprocates this support given to him, “I try hard to leave some days to family even though it’s not been easy”.

In his remarks, he appreciated YFM’s initiative, the Y Leaderboard Series, describing it as a massive initiative that provides mentorship to the youths.

Programmes Manager of YFM, Eddy Blay said of Kenneth’s interview with Rev. Erskine: “The ever articulate Kenneth Ashigbey made it to the table of leaders today, and he shared nothing but inspiration.  It is also impressive to note how he values his family as a pillar in his success. The future of the youth is indeed shaped by these great discussions with personable leaders like Kenneth.”

Emirates ready to serve travellers and welcome tourists to Dubai

Victoria Michaels has evolved into an entrepreneur and humanitarian