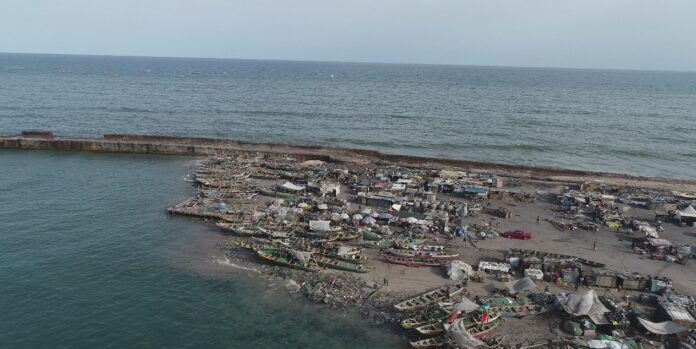 Ekumfi Otuam District in the Central Region of Ghana will also benefit from fish landing  site project as the Minister of Transport, Kweku Ofori Asiamah, announced the construction of an additional fishing port and landing site in the area.

Otuam is well known as the hometown of the former and late President, Prof. John Evans Atta-Mills, becomes the 12th community, selected by government to construct the fishing ports and landing sites with the other initial eleven being Axim and Dixcove in the Western Region, Moree, Mumford, Winneba, Senya Beraku, Gomoa Fete and Elmina in the Central Region, Teshie and James Town in the Greater Accra Region, and Keta in the Volta Region.

He said funds have already been made available for the project and construction is expected to commence in September, 2020. The project will comprise of a breakwater, a fish market, a net mending hall, a fuel station, an ice making plant, and a day care centre for children.

The Minister of Transport, Kwaku Ofori who was accompanied by the Member of Parliament (MP) for Ekumfi Constituency and Deputy Minister for Fisheries and Aquaculture Development, Kingsley Francis Ato Codjoe, the Acting Chief Director at the Ministry of Transport, Mrs. Mabel Sagoe, Engineers and Consultants of China Harbour Engineering Company (CHEC), Engineers and Officials from the Ghana Ports and Harbours Authority and the Ministry of Transport made this disclosure during a visit to the area.

Engineers from China Harbour Engineering Company (CHEC), who have been contracted for the project were introduced to the traditional authorities and members of the community by the Minister, and encouraged the local people in the community to support the contractors to ensure speedy execution of the project.

“There would come a point where you may encounter some discomforts as a result of the construction works. You may need to temporarily relocate your activities. When the time comes, please come together for a pleasant way forward,” The Minister adviced.

In addressing the Chiefs and people of Ekumfi Otuam, the Member of Parliament for Ekumfi Constituency and Deputy Minister for Fisheries and Aquaculture Development, Kingsley Francis Ato Codjoe expressed gratitude to the President of the Republic, Nana Akufo Addo for selecting Ekumfi Otuam as a beneficiary of the fishing ports and landing site project and also assured the fishing community of the government’s commitment to develop the fisheries sector for national economic development.

“We thank the President, Nana Akufo-Addo for committing to invest into the coastal regions of the country,” he said.

The Members of the Otuam Traditional Authority called for unity among the people to ensure that the project is successfully executed for the benefit of the community.

“Let us come together in unity and prayer to ensure this project is successful because it has been long overdue,” the Chief of Otuam encouraged.

Ahafo Community Bank pushes to meet minimum capital… …as it battles with over GH¢500,000...