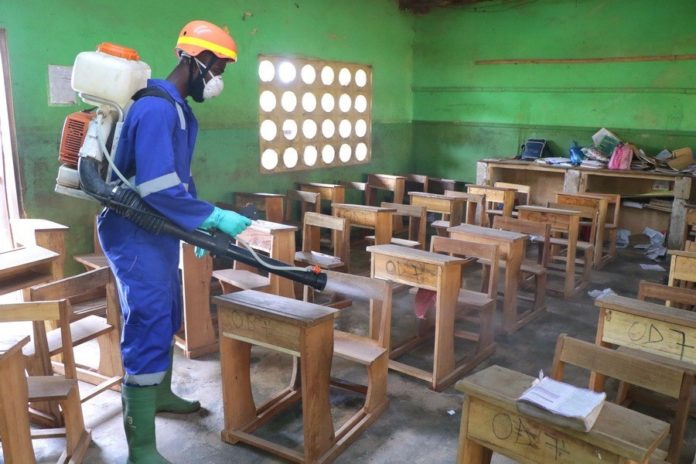 About 4,500 basic schools in the Greater Accra Region are expected to be disinfected by Zoomlion Ghana Limited.

The exercise, which will cover both public and private basic schools, began on Monday in the Ablekuma North Municipal Assembly of the Greater Accra Region.

General Manager, Zoomlion Ghana Limited, Greater Accra Region, Ernest Morgan Arthur, made the disclosure while speaking to a cross-section of journalists at the Odorkor Cluster of Schools in the Ablekuma North Municipal Assembly where the exercise started off.

The exercise formed part of measures by the central government to keep environs of basic schools safe and also protect the final-year JHS pupils who are scheduled to report on Monday, June 29, from the Covid-19 disease.

According to Mr Arthur, Zoomlion would need the full cooperation of the heads of the schools. That, he said, would facilitate their work.

He went on to assure that all the 4,500 schools would be disinfected before the date of reopening—June 29.

On how they were going about the exercise, Mr Arthur said they had a team of workers who move ahead and sweep the classrooms and the offices among others before the disinfection is done.

“…because of the closure of schools for that long period, most of the schools’ compounds and facilities have become dirty. So, what we do first, is that we have Zoomlion workers moving ahead of the disinfection crews to sweep and clean the schools. And after that the disinfection teams come in and do the disinfection,” the Greater Accra Zoomlion GM explained.

He also added that his outfit had disinfection crews who would be deployed to schools in various municipalities in the region to undertake the exercise.

At Christ Ebenezer Preparatory & JHS, the General Manager, Mrs Rita Ofosu, Yeboah, expressed her school’s gratitude to the government and Zoomlion for the exercise.

“This exercise is a step in the right direction because it is part of measures outlined by the government to contain the virus,” she said.

She revealed that her school had already held a meeting with parents of pupils of JHS and drummed home their responsibilities to their children in these ‘new normal’ times.

“…on our part, we have bought the thermometer gun which would be used to take the temperatures of the final-year JHS pupils on a daily basis,” she said.

Though the school started some e-learning for the pupils, Mrs Ofosu Yeboah indicated that the patronage was low, which did not help much.

“We are also expecting some Veronica buckets and other Covid-19 items from the government, and we have been assured that we will receive them before next week,” she added.

On the social distancing protocol, the GM of Christ Ebenezer Preparatory & JHS was quick to assert that that would not be a problem, explaining that the school had spacious classrooms to accommodate the 30 pupils in a classroom.”

A teacher in charge of the JHS Department of SDA School, Theo Mensah, commended government for including private schools in the exercise.

“We have already met with parents of the final-year pupils and educated them on the Covid-19 preventive protocols. That is not all; we have also resolved to educate the pupils when they report back to school and to ensure that we all adhere to the Covid-19 safety protocols,” he noted.

For his part, a teacher at Odorkor 7 Basic School, Abdul-Wahab Haruna, stressed that the exercise would help keep safe the school’s environment.

However, he added that it was imperative that both teachers and the pupils observe the safety protocols for “our own safety and that of our loved ones.”

Zoomlion also had crews in the Weija-Gbawe Municipality, where some clusters of schools including the Mallam Cluster of Schools were disinfected.

Fashion speaks but are we listening? The significance of Ghanaian fabrics, textiles and fashion...

Gov’t must cut down on imports – World Bank Boss

This is Leadership: The spread effect

“Doing the things that are nice to do, but if everyone else does it create a mess at the workplace.” I won’t try talking economics....