Some local manufacturers of concrete products in the country are calling for some government interventions to make operations more flexible for local entrepreneurs in the industry.

The move, according to them will build the capacity of local entrepreneurs in the construction industry to compete with other players.

In an interview with the B&FT, Managing Director of Phastor Limited, John S. Sam expressed concern about the influx of foreign nationals in the industry, adding that if care is not taken, these expatriates will take over the business from the locals.

“Even though we all accept globalization, there should be some government control within the industry, because if we do not take care expatriates will take over the industry from indigenes.”

According to him, some of the machines they use for the work are extremely expensive, making it difficult for local entrepreneurs to purchase, hence their inability to meet the demands of the market like foreigners who operate in the same industry do.

He said: “There should be some government interventions, because not all the local entrepreneurs can purchase these types of machines, hence, barring we the locals from going for big contracts. In other places, they make soft terms for the locals to build their capacity.”

Mr. Sam also called for local content directives in the industry that will ensure that some materials required for government’s projects will be acquired locally, saying: “A contract can go through a foreigner because of their technology, which is sometimes understandable. But when there is a clause which requires that some materials are acquired locally, that will help.”

Chris Koney’s column … Starting a business with nothing

Why are homes in Ghana so expensive? 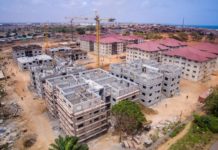 Simple security hacks for your building under construction

NCA allays fears of 5G technology and its alleged link with...