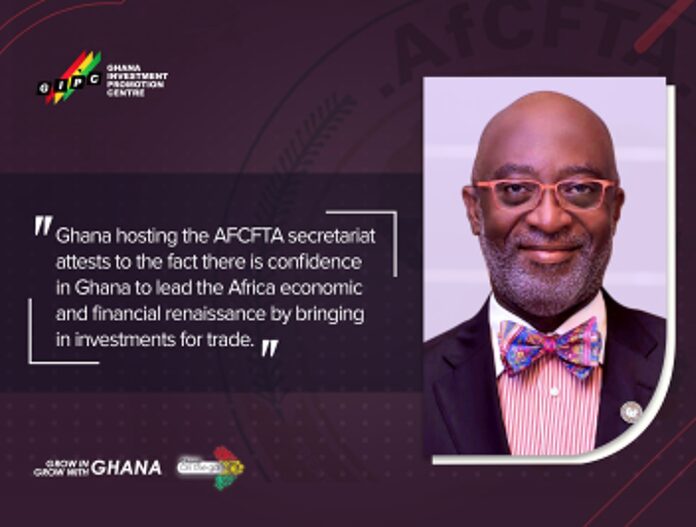 Once in motion, the core mandate of the secretariat will be to implement the African Continental Free Trade Agreement which has been described by the World Economic Forum as the largest trade bloc by number of participating countries since the World Trade Organisation.

Speaking at the inauguration and handing over of the AfCFTA secretariat, the first

Secretary-General of the AfCFTA Wamkele Mene was optimistic the effective implementation of the Continental Free Trade agreement will be vital in the continents’ economic recovery post pandemic.

The creation of trade blocs has proliferated over the past two to three decades, serving as an efficient means of facilitating smooth and effective trade by reducing trade barriers among member countries. Among the more well-known ones are the European Union (EU) and the North American Free Trade Agreement (NAFTA).

In Africa, trade integration has been pursued through the creation of regional blocs, resulting in the creation of about six regional trade blocs which include the Economic Community of West African States (ECOWAS), the Southern African Development Community (SADC) and the East African Community (EAC). But despite efforts by these trade blocs, intra African trade remains woefully low – hovering around 16 percent in 2000-2017 whiles figures for America, Asia and Europe were 47.4, 61.1 and 67.1 percent respectively as captured by the United Nations Conference on Trade and Development (UNCTAD) “Economic Development in Africa Report 2019”

The establishment of the African Continental Free Trade Area agreement in May 2018 comes as a more ambitious and broader initiative to create a common and integrated market for the continent to primarily boost intra-Africa trade. Under the agreement, member states under the AU have agreed to eliminate tariffs, quotas and other trade barriers, to allow for a free flow of goods and services between member countries. When fully implemented by all 54 AU member countries, the Agreement is expected to create the largest global trade bloc, with a market of 1.3 billion customers and a combined Gross Domestic Product (GDP) of about 3.3 trillion. Per projections by UNCTAD, the implementation of the AfCFTA should boost intra-Africa trade by 52 percent or 34.6 billion dollars by 2022.

A magnet for FDI

Well beyond deepening and accelerating trade, the formation of trade blocs has been evidenced to fuel the flow of Foreign Direct Investment (FDI) to affiliate countries of various trade blocs. For instance, studies showed that flow of FDI to the European Union (EU) increased substantially with the formation of the EU in 1992. The development was influenced by an increased growth in GDP and an expansion in market size due to a more liberalized trade system under the EU. Likewise, the easing of trade restrictions by Mexico upon joining the NAFTA in 1989, saw US investment in Mexico multiply from 4.9 billion dollars in 1989 to 15.2 billion dollars in 1993.

Ghana the sweet spot for investment

Given the significant role of Ghana as host nation of the AfCFTA secretariat, several initiatives in the form of policy and non- policy interventions have been deployed by government to create the right environment for investments and businesses to flourish.

In enhancing the competitiveness of local businesses in readiness for the implementation of the AfCFTA, a number of industrialization-focused policies were rolled out to bolster activities of manufacturing industries. Among them is the Ghana Automotive Development Policy which provides up to ten years’ corporate tax holidays and tax exemptions on imports for automotive companies looking to undertake local assembly of vehicles.

The One-District-One-Factory is another government vehicle that encourages industrialization through the provision of a set of incentives and tax reliefs for private sector businesses/investors to set up factories within the various districts of Ghana.

Agencies such as the Ghana Investment Promotion Centre (GIPC) and the Ministry of Trade and  Industry (MOTI) are in lay to provide needed support for foreign investors by providing a number of services. These include facilitating the registration of businesses, investment advisory services, joint venture search, identification of specific projects for investment promotion, as well as granting investment incentives and support for tax exemption applications.

These specialized incentives coupled with political stability and a fast-growing economy affirms Ghana as a prime destination for investments within the sub-region. “Ghana hosting the AfCFTA secretariat attests to the fact that there is confidence in Ghana to lead the Africa economic and financial renaissance by bringing in investments for trade” said CEO of the Ghana Investment Promotion Centre, Yofi Grant.

Ghana presents itself as one of the fastest growing economies in Africa with the World Bank projecting a 6.8 percent growth rate for the country in 2020. It must be borne in mind however that the outbreak of the COVID 19 pandemic has altered these projections. But despite setbacks presented by the pandemic, the government continues with plans for a strong economic recovery backed by industrialization. “The disruptions of Global Value Chains presented by the pandemic has reinforced the necessity for closer integration in order to boost our mutual self-sufficiency, strengthen economies and reduce our dependence on external sources”, said the president Nana Akufo Addo.

An endless spillover of benefits

However, the attraction of FDI, is but one of the key benefits of a liberalized trade system under the AfCFTA. A number of spill-over benefits as revealed by UNCTAD include, an increase in competitiveness of local firms due to the elimination of tariff and non-tariff barriers, transfer of technologies and job creation for the population as well as development of the agriculture sector and participation of Small and Medium sized Enterprises (SME’s) in regional and global business operations.

It is evident that where there’s liberalized trade, there is opportunity for investment and growth spread across various sectors and facets of the economy. That notwithstanding, issues of rules of origin and a harmonised customs system must be critically advanced in order not to erode the gains of the Agreement.

The Service Line with J.N Halm … People or policies?

Why stocks may be a better long-term investment than land

Digital democracy is still a long way off in Africa: it takes more than...