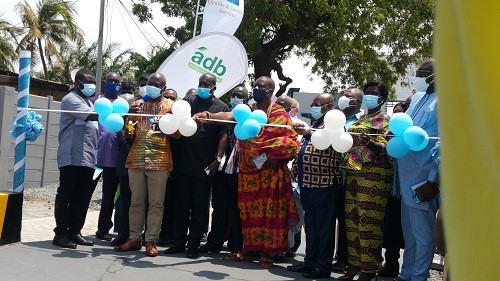 Management of Quantity and Quality (Q and Q) services, a subsidiary of Kingdom Exim Group, has over the weekend opened an ultra-modern weighing bridge and truck parking facility in the harbour city, Tema, to importers and exporters for the purpose of proper weighing system for heavy duty trucks and other transport services that operates around the port.

This facility, constructed at the cost of GH¢10 million, is located close to the port and other terminals. It is also connected to a digital monitor which displays the weight of the vehicle weighed, with an in-house weigh bridge, security, CCTV camera, drivers sitting area, washrooms and others.

Samuel Atta Akyea, Minister of Work and Housing, commended the company for investing into the various sectors of the economy, saying government would always remember the company’s social interventions as it showed humanity over corporate profit.

The weighbridge which would be used for weighing of trucks with goods will protect the road from damaging.

“For the government, it is refreshing to hear that Kingdom Exim Group has come on board to help the government solve unemployment issue that face the nation. In Tema alone the company employed over 2000 youth because of their corporate engagement,” he said.

He encouraged them to consider venturing into the housing sector, particularly in the provision of affordable housing to help bridge the deficit in the housing in Ghana.

Daniel Titus Glover, a Deputy Minister of Transport, said the project came at an opportune time when the country was struggling to ensure that its roads were safer. He indicated the investment falls in line with government’s agenda of the private sector being the vehicle to support government to transform this country and will support Kingdom Exim to thrive.

He urged the Tema Metropolitan Assembly (TMA) and the port’s authorities to ensure that every truck that loaded from the Tema Port passed through the weigh bridge.

Director of Tema Port, Sandra Opoku, welcome the initiative and said the port authority is ready to support any infrastructural development that will enhance import and export. She underscored the need for trucks to be weighed properly before and after they loaded to prevent deterioration of the roads in the country.

Kingdom Exim Group of Companies, a leading West African based quality-focused agro products exporter and supplier inaugurated the first private weighbridge for the purposes of weighing cashew bags and other Agro products in Tuobodom in the Techiman North District of the Bono East Region.