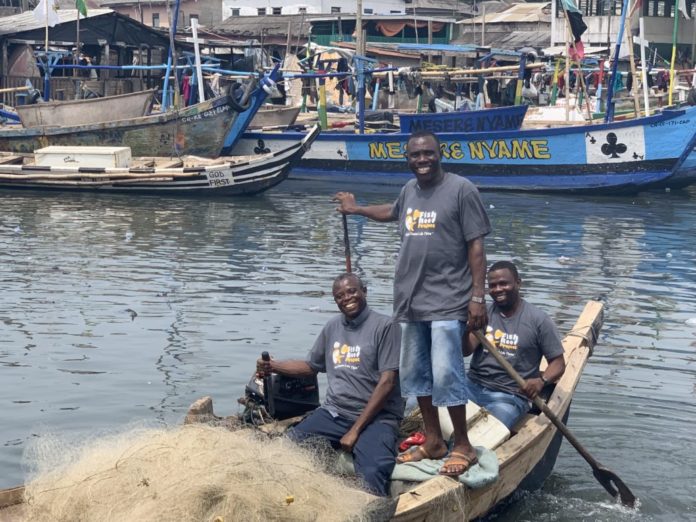 The Journalists for Responsible Fisheries and Environment (JRFE) is calling on government to end illegal transhipment of fish at sea popularly known as ‘Saiko’ to help better the lives of artisanal fishers.

JRFE is worried about how the livelihoods of artisanal fishers in the four coastal regions of Ghana, are being affected with the wanton disregard for the fisheries laws in Ghana by some industrial trawlers, especially in these times of COVID-19.

In particular, the JRFE shares in the concerns of fishermen that has led to a series of agitations across a number of coastal communities in the country in recent times.

In a statement signed by Kingsley Nana Buadu, Executive Director of JRFE, it says “Some of these trawlers have been and are still engaging in the transhipment of fish at sea which the country’s fisheries laws forbid. The worrying aspect is that, they target species meant to be caught by local fishers, freeze them and then resell to the fishermen for profit.”

This, the statement noted, is rendering the government’s support for fishermen in terms of giving out subsidized outboard motors and premix fuel, less useful. This is because these fishers spend hours on sea but return with little or no catch.

“Both the Fisheries Act 2002, Act 625 Section 132 and the Fisheries Regulations 2010 (Regulation 33) clearly prohibit Saiko. Some of these trawlers have been and are still engaging in the transhipment of fish at sea which the country’s fisheries laws forbid,” the statement said.

The worrying aspect the statement pointed out is that they target species meant to be caught by local fishers, freeze them and then resell to the fishermen for profit. The statement said this illegality, is undermining government’s efforts to better the lives of local fishers through fishing which serves as a source of livelihood for over 2.7 million Ghanaians.

The statement pointed out that Saiko is threatening the jobs and food security of the fishing communities and Ghana’s economy in general.

According to the statement, in 2019 fisheries scientists warned that Ghana is likely to lose fish stocks in the near future in the marine waters and put food security and goals for the economic growth and poverty reduction in fishing communities at risk.

The chairman of the Scientific and Technical Working Group for the Ghana Sustainable Fisheries Management Project (SFMP), Professor Kobina Yankson, has cautioned that Ghana is facing imminent fish stock depletion unless something drastic is done to save the industry.

“Considering the fact that, Saiko has contributed to the decline and near collapse of the small pelagic stocks such as sardinella, chub mackerel and anchovies, JRFE is calling on the government of Ghana to as a matter of urgency end Saiko and other illegal fishing activities such as over fishing and overcapacity, light fishing and fishing with chemicals to help save the lives of local fishers,” the statement added.

“The time for the country to act is now. It is time to save the fisheries sector. Ending saiko in Ghana means, the country is greatly contributing to the achievement of the targets set under the Sustainable Development Goal 14 – Life Below Water,” the statement concluded.