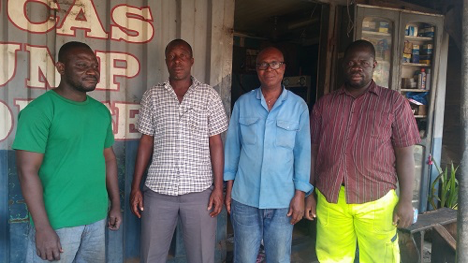 The Ghana National Association of Garages, the umbrella organization for all small scale automobile repair workshop operators, have welcomed the emergence of an automotive industry in Ghana and commended government for promising to restrict second-hand cars which account for 70% of vehicle imports.

The association’s members, who constitute Zone 14 in the Ashaiman municipality, a major hub of car repairs, said they are in favour of the ban on over aged imported cars into the country describing these cars as death traps, noting that it is time Ghana works with age of vehicles and not registered number plates.

Martin Lucas Tetteh, Chairperson of Zone-14, said government should institute series of action plans in order for them to adopt to changing circumstances as new models of vehicles emerge on the market.

“One of the vital areas government should focus on is automotive skills and technology upgrading, as well as involving them in any auto programmes for higher value addition and capacity building so that they can stay in business and contribute to national development,” he said, adding that working on old models for some decades expose them to significant risk, hence the need for upgrade to service, protect, and grow their business.

“We welcome the automobile industry because every new thing is good. Years ago Africa Motors and other companies were in the system and still there were mechanics, so all that we need is to upgrade ourselves so that our business will go on,” he added.

“Once it is a new car coming into the system, we must understand the car and the manufacturer by going for workshops so that we can fix it according to set standard. Most of the vehicles we are working on now are old models and we are tired of working on them. We want to work on the new models but we need to understand the car before we service it,” Mr. Tetteh said.

The Customs Division of the Ghana Revenue Authority (GRA) will not allow into the country, importation of cars that have been defined, according to the Customs Amendment Act 2020, as salvaged or do not have a clean title by November 1, 2020.

Mr. Tetteh indicated that apart from capacity building, government should support them financially to purchase diagnosing machine and other equipment to make their work easier.

Secretary of the Association, Benedictus Kpormego, added that the automotive industry guarantees permanent employment to some members such as welders, mechanics, pump servicers, and others in one way or the other.

As a welder and a fabricator, he lamented the fall in material quality on the part of metal or steel companies which is affecting their works over a decade now and entreated the Ghana’s Standard Authority to beef up their game and check standard of operations by these steel companies in the country.

Vice Chairman of the Association, Alhaji Meriga noted that the youth no longer take delight in apprenticeship and appealed to government to ensure that the coming in of the automobile industry bring to light some innovative measures to attract more of the youth into the sector.

Alhaji Meriga, who has been in the industry for over 30 years, recalled he used to have over 30 to 40 apprentice, but currently had none. Adding that those he decided to favour to trained them free of charge stopped along the way due to the unavailability of money for food.

He said the situation is breeding more anti-social activities in the area and appealed to government to introduce measures to bring them back to pursue a trade for a better living.

The Basics of Retirement Planning

… a car with everything - including soul It is no secret that the 12th-generation Toyota Corolla has a soul, which enables the sedan to...