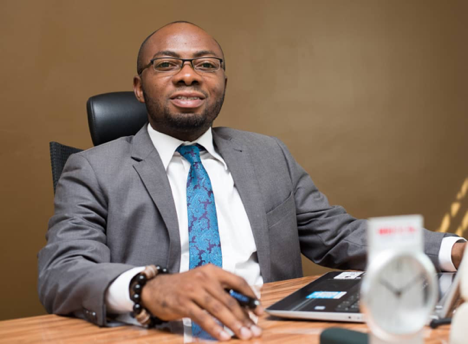 The novel coronavirus (COVID -19) pandemic has sent shockwaves throughout all economic sectors of the globe. This pandemic has seen many economies almost brought to a near-standstill due to strict restriction on movements to halt the spread of the virus. The oil industry, like all other industries, has been one of the hardest-hit sectors and has suffered its fair share of the shock on oil prices.

The effect of the virus on fuel prices came in two folds – the demand-side effect and the supply-side effect. The demand shock which is evident throughout the world is mostly due to a reduction in transportation and the closure of facilities around the world which would rather have used petroleum products for production. The World Bank in an April report estimated that global demand for oil would drop by 9.3 million barrels per day in 2020. Furthermore, demand in April was estimated to be 29 million barrels per day lower than 2019 figures while second-quarter estimations stand at 23.1 million barrels lower than 2019 figures (IEA, 2020).

The supply shock, on the other hand, was caused by the oversupply of oil due to the lifted restrictions for the Organization of Petroleum Exporting Countries (OPEC+) and a price war between Saudi Arabia and Russia. This price war was initiated when OPEC countries decided to cut supply by 1.5million barrels per day until June when prices began to drop, with Non-OPEC states such as Russia also tasked to follow suit. However, Saudi went against the plan and the non-OPEC members retaliated by pumping more oil into the market-leading to plummeting of oil prices (African Union, 2020).

Though the COVID-19 spread was declared as a global pandemic on 11 March 2020, the effect on the petroleum market had been evident on Brent and other price indices from mid-January and eventually became worse in the succeeding months as more countries declared countrywide and local lockdown leading to a reduction in demand of petroleum products across the world.

The price changes of crude or finished petroleum products like gasoline and Gasoil on the international market usually have a trickle-down effect on the price at which consumers purchase fuel for their individual and household usage (ex-pump price). The price at which individuals buy fuel differs from country to country based on different factors such as the strength of the currency (Forex), import and export levels of oil, taxes in the build-up, local refining capability and subsidies among others.

In Ghana, the ex-pump price is made up of different taxes and levies, CIF or DES pricing, margining sharing (Distributors, Marketers and retail margins). Based on the changes in any of these, the price consumers pay for fuel is likely to change.

Using gasoline price data between the months of January to June from trading economics, a comparison of the ex-pump price percentage variations between Ghana and other countries is elaborated in this article. Data used was analysed using monthly averages for gasoline prices, and the percentage changes were then computed between succeeding months.

The monthly average of the global crude prices for Brent crude as against the local gasoline prices in Ghana with the percentage changes between the months are shown in Table 1.1. The table shows that globally, the international oil prices saw a dip from the January average of around US$63.94 to the lowest point in the reference period of US$26.63 average in mid-April when the pandemic intensified. 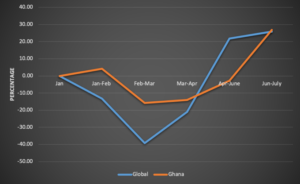 The percentage price increase in ex-pump for six African countries for the first six months of 2020 are shown in Figure 2. The countries used in the comparison are South Africa (SA), Egypt, Nigeria, Zimbabwe and Kenya. From the figure, it can be seen that all countries had varying percentages of change in the ex-pump prices in the reference period. Between January and February, all the countries except Nigeria experienced a change in the ex-pump. Of the changes, South Africa and Zimbabwe experienced a price fall of 4.50% and 3.81% respectively, which was in line with the change in the international crude prices, while countries such as Ghana, Egypt and Kenya had ex-pump prices increasing. All the countries experienced a percentage decrease in ex-pump between February and March, the largest drop in this period was noticed in Zimbabwe (40.00%) and the smallest drop was in Egypt (2.04%). 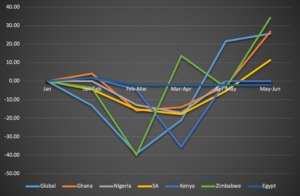 Figure 2: Comparison between Ghana and other African countries

A very important anomaly is the percentage change of ex-pump prices in Zimbabwe between March and April. Ex-pump prices increased by as high as 13.79% when all countries shown experienced a fall.  This also came in a period when global Brent crude prices had fallen as much as 21.05%.

In general, the changes in ex-pump in Ghana were very similar to that in Egypt and Kenya though some differences existed. Zimbabwe also had very high fluctuations in the percentage changes compared to other African countries. Egypt also had the smallest average change between the time period averaging about 1.29% change between February to June.

The percentage price variations of Ghana are compared to that of other oil-producing countries such as the United States and Saudi Arabia. As shown in Figure 3, Ghana saw a percentage increase in ex-pump prices between January and February, which was similar to that of Saudi. However, the United States saw a drop within that same period similar to the global prices. In the following month, all countries had a price decrease with Ghana experiencing the highest change of 15.84% as compared to that of the US (7.81%) and Saudi Arabia (1.79%).

Ghana experienced an increase in ex-pump price in May-June after three periods of decrease. Ghana’s increase was greater than that of the US but less than that of Saudi Arabia. These variations show that Ghana and Saudi experienced similar variations in terms of the direction of change although the percentage changes were different for different reference periods. 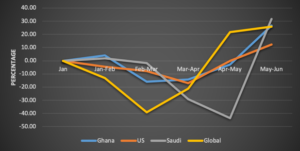 Figure 3: Comparison between Ghana and other oil producing countries

Figure 4 shows a comparison between Ghana and a lower-income country (Haiti). It can be observed that the variations between Ghana and Haiti are similar except in the February-March period. In that period, while Ghana experienced a fall in its ex-pump prices by 15.84%, Haiti had an increase in the ex-pump price of 3.28%.

In general, Haiti and Ghana had different levels of price

Figure 4: Comparison between Ghana and a low-income country

Ghana was compared to two other countries, who are in the same UN classification based on income levels as herself. The countries used in the comparison are Nigeria and Vietnam. In this comparison, Nigeria had no change in ex-pump prices between January and February as compared to Ghana’s increase while Vietnam had a fall in its ex-pump price. 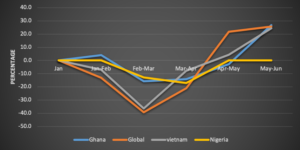 Figure 5: Comparison between Ghana and other lower Middle-income countries

In the following month, all countries experienced a percentage decrease in their ex-pump prices. For the periods April-May and May-June, Nigeria’s ex-pump prices stayed constant at 0% change while Vietnam continued its positive change trajectory. Overall, Vietnam had a percentage change movement similar to the global crude price while Nigeria had two periods of zero change. Also, in all cases except in March-April, Ghana had a higher absolute per cent change as compared to Nigeria. 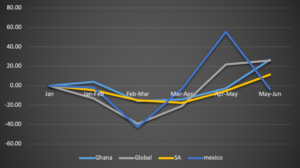 Lastly, Ghana as compared to some countries in the high-income level category. This comparison as shown on Figure 7 shows that Ghana’s ex-pump price variations had a similar outlook to those of these countries in the February-March period as they all experienced a drop in ex-pump price similar to that of the global crude price. 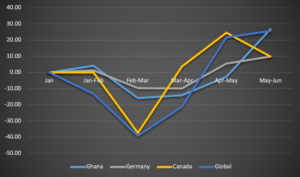 In the March-April period, Ghana again had a negative variation as all others except Canada in which price seemed to increase by 3.64%. In the final reference period (May-June) all the countries under review had an increase in ex-pump price with Ghana experiencing the biggest leap of 26.76%.

In the face of producing more than 100,000 barrels of crude oil per day, Ghana continues to depend on imports of crude oil to meet its demand for petroleum products, which has risen exponentially as a result of increasing economic activities. Consequently, the country is exposed to the vagaries of a competitive international market for crude and petroleum products. The ex-pump price variations that have so far been experienced in Ghana during the COVID-19 period have not been limited to Ghana. These variations have happened across the globe in different ways. Though the overall trend is similar across all countries reviewed, the amount of change and the speed of change in reference to the global crude price changes have been different.

The writer is the chairman and chief executive officer of Gye-Nyame Offshore Services Limited, an integrated energy company committed to offering a unique range of offshore and onshore services together with our international partners in the Energy Renewable sector across Africa