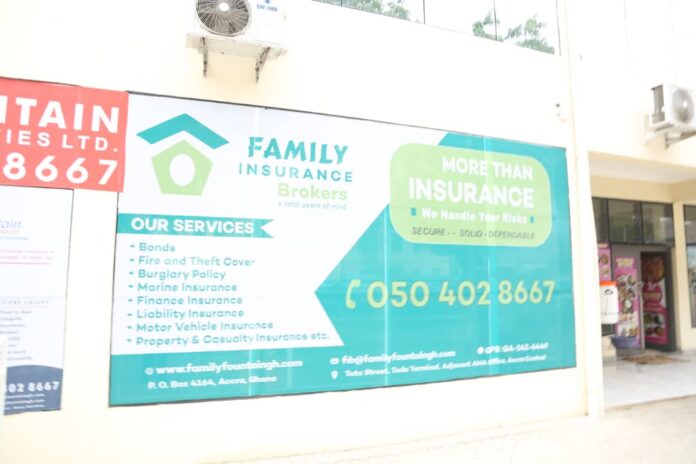 The National Insurance Commission (NIC) in collaboration with the Police has again blown the lid off another unlicensed Insurance brokerage firm operating under the name Family Fountain Insurance Brokers. This Company has been operating for some time now as an intermediary with the tacit connivance of a direct underwriting company.

The suspects, whose modus operandi are perpetrated at the premises of the Aayalolo Transport Terminal in Accra Central, have been serving as an intermediary between the unsuspecting insuring public and a known licensed underwriting insurance company. They are currently under Police investigations and if found culpable would face criminal prosecution according to Law.

The discreet approach employed by the Special Investigative Unit of the NIC and the Police on September 9, 2020, led to the suspects unknowingly disclosing their modus operandi after weeks of surveillance and trailing.

Armed with conspicuous information, the suspects were picked up by the Police.

The NIC will also investigate the underwriting company involved and would apply the relevant sanctions as stipulated under the Insurance Act 2006 (Act 742) of the National Insurance Commission (NIC) which makes it a crime to engage any unlicensed insurance intermediary.

The Insurance Act requires that before an entity can commence insurance business in Ghana it must be licensed by the NIC. Akin to driving without a licence, the NIC will not colour any pink as red when an individual or entity contravenes the Law with the view of protecting innocent Ghanaians.

The reason is to ensure that such an entity meets the statutory minimum capital requirement and has qualified people to manage its operations. It is also to give the NIC the opportunity to check on the ownership structure and trace the background of the shareholders to check for any possible criminal impropriety.

According to the Commissioner of Insurance, Mr. Justice Ofori in previous media engagement, “the Regulator is also interested in finding out the source of the Company’s capital. The Directors must also have minimum academic and professional qualifications and must be people of integrity to superintend over the affairs of the business. Among the employees, there should also be qualified insurance professionals with some minimum requisite experience. Beyond that, the Regulator is interested in knowing the investment mix of a company and ultimately its claims payment culture”.

Mr Ofori added that a company’s office is inspected by the Regulator to ensure that it is conducive for transacting insurance business. All these are done to protect the public interest and prevent the breach of public trust. The Commission will, therefore, not renege on this duty.

In Ghana, an insurance company is licensed to operate either as a life insurer, non-life (general) insurer, reinsurer, or insurance brokerage firm. In the case of FAMILY FOUNTAIN INSURANCE BROKERS, the only thing that will qualify it as such is the licence after having met all the basic requirements, which they circumvented.

Following the arrest of the officials of the Family Fountain Insurance Brokers, the Deputy Commissioner of Insurance, Mr Michael Kofi Andoh, used the opportunity to advise all and sundry to report the activities of any nefarious and suspicious character or Company trading or soliciting for insurance business without due authorisation to either the Police or the nearest NIC Office nationwide.

“It is important for the general public to join us to condemn this practice and to shame those involved as we desire to have a sound, clean, financially stable insurance system. To verify the authenticity of any insurance entity in good standing, members of the general public are encouraged to visit the NIC’s website: www.nicgh.org”, he disclosed.

Why advertise, if the vacancy is already filled?

Applying the rod in whose interest?

Why advertise, if the vacancy is already filled?

Aside a significant number of people in Ghana who are ready and capable of working not finding jobs, there are also a considerable percentage...

Yara Ghana limited, a leading name in the fertilizer industry in Ghana has won the Agro Input Company of the year and Agro Input...