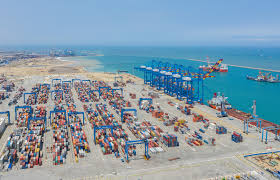 Ghana’s seaborne trade in import and export volume in the first quarter of 2020 recorded a net effect of negative 43.3% compared to the same period in 2019.

These nine (9) import commodities recorded about 64% of the total decrease in import trade volume for January to March 2020. And some major export commodities – including manganese, timber logs, and bagged cocoa beans – also experienced a fall.

Cumulatively, these commodities contributed to about 96% of the total volume decrease recorded in the export trade volume for the period January to March, 2020.

Ghana’s seaborne imports for 2019 came from the Far East range, representing 41% of Ghana’s total import trade. Africa was next with a 21% share, followed by the North Continent and Mediterranean Europe range at 12% and 11% share respectively of Ghana’s import trade.

These ranges of decline experienced by the Ghana shipping industry were a result of the outbreak of coronavirus; also, affected global merchandise trade by volume fell by 3% year-on-year in the first quarter of 2020.

“COVID-19 has affected trade negatively; this downward trend is expected to continue in the latter part of the year 2020,” it stated.

The Future of Work Capsules: (1) Soft Skills as one of the most...

Towards a better transportation for all