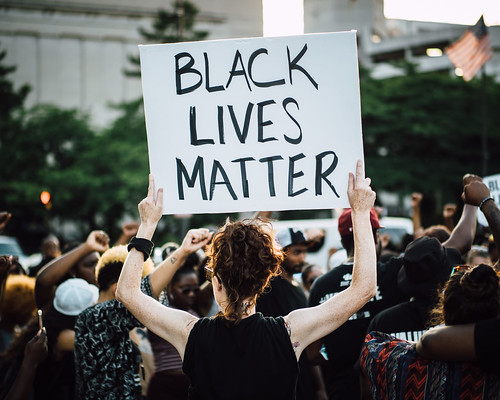 The killing of an unarmed African-American by a Minneapolis police officer and resulting civil upheaval have set back U.S. efforts to strengthen its tenuous relationship with Africa and counter China’s growing influence.

Moussa Faki Mahamat, the chairman of the African Union Commission, joined senior officials from Nigeria, South Africa and Ghana in condemning the death of George Floyd. They berated the U.S. for failing to deal with racial discrimination — remarks that contrast sharply with the guarded diplomatic tones typically used in interactions with the world’s biggest economy.

“U.S.-Africa relations were already at a low ebb,” Kissy Agyeman-Togobo, the managing partner of Songhai Advisory Group Ltd., said by phone from Accra, Ghana’s capital. “Now with the unjustifiable killing of George Floyd, the hurt, disgust and outrage are palpable.”

Africa has always been low on the U.S. foreign-relations priority list — the world’s poorest continent accounts for less than 2% of its total two-way trade. Its clout has steadily been eroded by China, which has almost four times as much trade with the region and has nurtured ties by offering loans and investment with few strings attached.

The coronavirus pandemic afforded it the opportunity to do just that, with State Department officials highlighting America’s contribution of almost $250 million to help Africa tackle the pandemic, more than any other nation. But the damage done to America’s reputation by Floyd’s killing and its handling of the ensuing protests indicates the moment may have been squandered.

“The U.S. has traditionally been seen as that beacon of democracy that says you need to treat protesters with decency and stand up for rights,” said Adewunmi Emoruwa, the lead strategist at Gatefield, an advisory firm based in Abuja, Nigeria’s capital. “Now we see the looting, the arson, the near anarchy going on in the U.S., and the brutal police response. Africa is saying that maybe the U.S. isn’t all we thought they were.”

The State Department said Floyd’s death was a “grave tragedy.” Those responsible will be held accountable and Americans are entitled to protest peacefully to express their outrage, it said in an emailed response to questions.

African animosity toward America has been fueled by President Donald Trump’s derogatory reference in 2018 to African countries and his plans to quit the World Health Organization — headed by a former Ethiopian health minister — over its handling of the coronavirus crisis. And the Nigerian government has locked horns with the U.S. over its call for an independent probe into allegations that African Development President Akinwumi Adesina, the West African nation’s former agriculture minister, awarded contracts to friends and relatives.

By contrast, China has largely steered clear of domestic politics in Africa, focusing instead on trade, building and funding bridges, railways and power plants and offering scholarships to students and academics.

Still, America remains the continent’s most important development partner — it contributed $10.7 billion of aid to sub-Saharan Africa in 2018, according to donortracker.org. That, combined with its funding of African health programs that have saved millions of lives, mean the upheaval in the U.S. is unlikely to have a large or long-term impact, said Gyude Moore, Liberia’s former public works minister and a senior policy fellow at the Washington D.C.-based Center for Global Development.

“China remains attractive as a partner when it comes to investing in telecommunications and infrastructure, but I don’t see there’s much space for China to increase its influence,” Moore said.

Ovigwe Eguegu, an Abuja-based analyst, isn’t convinced the U.S. is truly committed to closer ties with Africa given that it has cut funding for programs on the continent, or that criticism from its leaders will make any tangible difference.

Innovative Strategies for Startups and Small businesses Pitching Right: How to pitch your startup to investors It is a truism that a good idea sells itself,...

The consequences of ‘fake news’ come into strong focus during times of crisis, such as the COVID-19 pandemic. Misinformation and claims of phony cures...

The ARB Apex Bank Limited has applauded the decision by government to commence payment of locked up investments in collapsed Fund Management Companies, describing...

The Economic Advisor and Spokesperson to the Vice President Dr Gideon Boako has donated Toyota pick-up and 10 motorbikes to the Tano North Constituency...

The Business & Financial Times online is the African Leading Platform In Providing Business and Financial News
Contact us: [email protected]om

The Case of Errand Boys – A Stitch in Time Saves...