Home Business PHUBBING: Dealing with snubbing at the front line 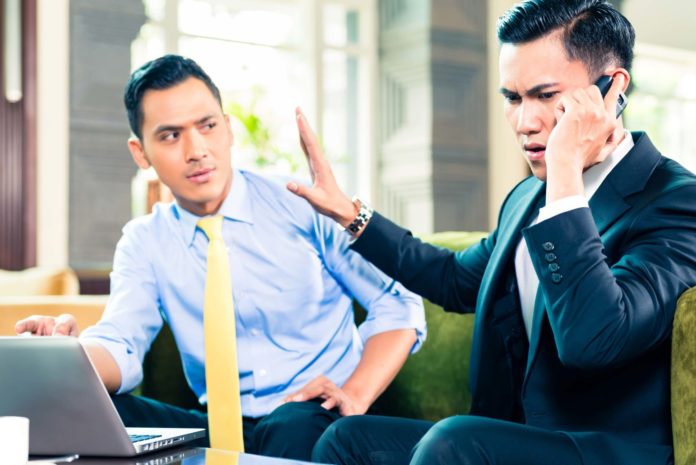 If there is one thing that has come to stay in this mobile-crazy world, it is the advent of new terms every now and then. Many of us are learning how to WFH and this means we have to ensure that at every point in time we have enough data. This is not too surprising in a world where we “Google” words to find their meaning, where we can “Deepfake” someone’s image to provide “fake news” and where “conversions” have nothing to do with going to church or having a transformational spiritual experience.

We now live in a world where “applications” have nothing to do with writing letters to get a job, “bugs” are not eight-legged arthropods, “clouds” do not cause precipitations and where the “back end” has nothing to do with the human anatomy. We find ourselves living in a world where “firewalls” do not prevent fires from spreading and where “traffic” has nothing with the number of cars on the road during the morning rush hour.

For a service experience consultant in a tech-drenched world, I always have to ensure that in the very least, I have an idea of what terms are being used in the customer experience space. This is how I chanced on the term “PHUBBING” quite recently. Unknown to me, we have all been engaging in phubbing in one way or the other and more often then we realise. We phub at home. We phub in public. We also phub at work.

Phubbing is what young ladies of today do when they are approaching a place where a number of young men are gathered. Phubbing is what we do when we see that annoying individual coming our way. In my opinion, the greatest culprits of phubbing are athletes—footballers, basketball players, track and field stars—just about to enter the arena.

I am pretty sure the uninitiated reader might be wondering what this “phubbing” is all about. It is quite simple. The word is a combination of the words “phone” and “snub”. It is simply the use of the phone to snub someone or to ignore someone by paying attention to one’s phone instead of the one.

The term has been in use since May 2012 when it was first coined as part of a campaign to bring attention to the behaviour. The campaign was attributed to the Australian subsidiary of the global advertising firm, McCann. It is said that the entire campaign was initially aimed at boosting sales of a dictionary—The Macquarie Dictionary of Australian English.

It is important to note that phubbing is not just about using one’s phone in the presence of another person. The mobile phone is now an extension of our hands. Many of us cannot exist normally without our phones. Phubbing, however, has to do with intentions. It is about the reason for looking at one’s phone at a particular point in time. To phub is to intentionally snub the next person. The phone just becomes a convenient excuse.

There are enough studies to show that phubbing is not just a little bad habit that we have all come to adopt with our increased use of the mobile phone. Phubbing has been known to affect relationships among people. Ironically, while we want to believe that the mobile phone connects us with others, phubbing has actually been found to negatively affect the quality of our in-person relationships. We no more tend to chat with each other as we used to. People are more comfortable living their lives on their mobile phones and other mobile devices rather than turn and have a meaningful conversation with the next person.

There is a study that showed that when one person involved in a conversation starts to use his or her phone, the other person in the conversation feels a sense of disconnection. In another study, it was found that sometimes just the mere presence of a mobile phone without it being used, even negatively affected the connectedness among people having a conversation.

There are even studies that proved that phubbing can become a source of dissatisfaction among married couples. Marriages in which one partner constantly engages in phubbing can lead to depression of the phubbed partner. When the one who claims to love you and wants to share the rest of his or her life with you is more interested in someone or something on his or her phone, it is difficult to feel a sense of connection with the one.

It might seem that when it comes to phubbing, the one being snubbed is the one who suffers alone. However, there is a study that claimed that phubber also suffers. People who use their phone while eating with family and friends are found to enjoy the meal less and tend to be more distracted than those who do not use their phones at all. Things become very awkward when the phone is put away and people have to look at each other in the eye. Phubbing is therefore not a joking matter by any stretch of the imagination.

It is one thing for one to phub another person at home, in private or among friends. It is, however, a different thing to phub in a business setting or in the workplace. Phubbing in the workplace regardless of who does the phubbing can have negative effects. A recent survey carried out among almost 3000 employees in Sweden came out with some interesting findings regarding “phubbing” and its impact on the service experience. Titled “It takes two to interact – Service orientation, negative emotions and customer phubbing in retail service work” and published in the Journal of Retailing and Consumer Services, the study concentrated on what happens when customers engage in phubbing.

Undertaken by two Swedish researchers, the study found that when customers phub those serving them and rather look at their phones, a negative condition is created in the service environment. When this happens customer-facing employees feel ignored and they, in turn, find it difficult to deliver the quality of service they are supposed to deliver. It is not easy to be nice to somebody who deliberately ignores you.

It is, however, important to note that incidents such as phubbing eventually takes its toll on the customer service employee. Eventually, frontline staff who have to go through hours and hours of handling such customers begin to show signs of wear and tear. By being continuously exposed to such uncivil behaviour from customers, there is increased dissatisfaction with work and eventually burnout sets in. It is already known that when customers engage in bad behaviours such as verbally abusing or bullying service employees, the customer-handling employees tend to suffer. However, what this study sought to do was to find out the effects of something as seemingly small as phubbing. The effects of phubbing are evidently not too different from the more serious behaviours.

It will be unpardonable for a customer-serving employee to try to phub a customer. That would easily result in the business losing the said customer, which is the worst kind of punishment that the offended customer can inflict on the offending business. One, therefore, expects the same kind of respect to be shown by customers to those who serve them. However, as can be seen from the ongoing discussion, phubbing by customers is an all-too-common practice.

The availability of ready alternatives and the intensity of competition means that there are certain customers who feel almost invincible when dealing with business. These customers might exhibit all kinds of rude behaviours that the frontline employee must learn to deal with. Retaliation, of any kind, is out of the question. This is why constant training and coaching is a must for every customer-focused business organisation.

Staff at the front desk must be trained to anticipate and handle phubbing of any kind and from any customer. Knowing what to expect can sometimes soften the impact of behaviours such as phubbing. It is also important that when staffing the front line, the organisation does well to place individuals who are necessarily service-oriented.  These individuals have a bigger heart to handle phubbing customers.

So long as humanity continues to attempt to reside within some sort of civil gathering, the issue of incivility will always come up. There are always going to be those instances where people will not behave as expected by the accepted rules of civility. When incivility transcends private realms into the public domain such as in the business setting, the situation becomes a bit more disturbing. It does not matter if that behaviour is caused by something as small as a mobile phone.

The role of rural banks in Ghana’s future economic development

It is increasingly recognised that we live in a VUCA World, characterized by Volatility, Uncertainty, Complexity and Ambiguity. The Covid-19 pandemic has shown how...

… as 60% of businesses expected to miss out on 2020 targets In the changing face of business, especially retail, it would be prudent...

Gov’t urged to be tough on pirates and textile smugglers