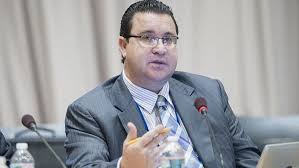 The Country Director of the World Bank, Pierre Frank Laporte, has said the global finance firm will undertake an assessment of the COVID-19 situation in December to ascertain whether or not the pandemic is declining before a decision is taken to extend the debt suspension for countries.

He told Alfred Ocansey on the Sunrise morning show on 3FM 92.7 on Thursday, May 28 that the debt suspension will be extended if the COVID-19 situation is getting worse by the deadline period of December, 2020.

In March this year, African finance ministers called for a US$100billion stimulus package aside from a request for suspension of debt service payments.

They held a virtual conference to discuss how to deal with the social and economic impacts of the pandemic on African nations. This was to help the continent combat impacts of coronavirus on the economy.

Accordingly, the World Bank, International Monetary Fund (IMF), African Development Bank (AfDB) and other regional institutions allowed the countries to tap into existing facilities. Some US$44billion will come from not servicing debt.

The suspension is to last up to December this year, by which the time the CoVID-19 situation is expected to have declined.

But Mr. Laporte told Alfred Ocansey that some of the finance ministers have already called for an extension of the period, because the situation is increasing. “Between now and December, countries which qualified for this initiative are expected to request formally through bilateral [agreement] to have a suspension in their debt service until December.

“And after December, the processes and initiatives will be reviewed. We will know the impact and how things are at that point in time. We’ll know the impact because of how much debt in principle will be postponed or suspended. We will look at whether we have been able to bring it under control, have things resumed normally? If this is not the case, it is very likely [the suspension will be extended]. Some ministers are saying to us that December is just not enough.

“It has been made very clear by the bilateral institutions and ourselves we are prepared to go beyond that. By December in the first cut-off period, the situation will be assessed. If need be, then we will extend the period again.”

‘GPL among best organised leagues in Africa’ …is this Nyantakyi’s biggest blunder?