Home Headlines Corona virus and the rise of racism 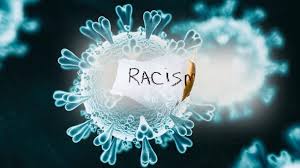 Outbreaks create fear, and fear is a key ingredient for racism and xenophobia to thrive. The coronavirus disease 2019 (COVID-19) pandemic has uncovered social and political fractures within communities, with racialized and discriminatory responses to fear, disproportionately affecting marginalized group. This time is no exception, with many examples of racist abuse reported.

People  have rightly been concerned with the global health and economic implications of this pandemic, but they have neglected to acknowledge how racism have rise and become rampant within this period. Political leaders have misappropriated the COVID-19 crisis to reinforce racial discrimination.

Donald Trump has referred to severe acute respiratory syndrome coronavirus as the Chinese virus, linking the health threat to foreign policy and trade negotiations. Trump has claimed that the virus is Chinese because it originated in Wuhan, China.  Trump willfully fails to acknowledge the imputations  associated with calling it “Chinese.”

Another xenophobic act seen during this pandemic was in southern China where Africans have become targets of suspicion, distrust, racism and subjected to force evictions, arbitrary quarantines and mass corona testing even though many have not left China recently. This happened when a Nigerian community in Guangzhou confirmed imported cases of the virus. There have also been a number of attacks across  America, totaling nearly 1,500 counts of discrimination against Asian-Americans. Asian-Americans have endured being cursed at, beaten, and coughed at for their alleged association with the corona Virus.

Over the years racism have caused more harm than good and it brought about violence acts which have led to loss of life, properties, unemployment and many others. Racism slow down development and civilization, this also lead to higher probability of political violent and conflicts.

In this torrent of fear and anxiety, we cannot afford to isolate people even more through stigma and xenophobia. We each have a responsibility support each other and advocate for a better society. Those with the loudest voice, the government and media must speak out to condemn these actions. They have a duty to educate the public, protect the vulnerable, and hold people accountable for prejudice and discrimination. The media must also Consider the types of photos being used to communicate stories, messaging and advice about the coronavirus and must void using language that may trigger a “fear-based” response. By staying silent we let xenophobic narratives and   racist attacks damage our society, the repercussions of which will likely persist beyond the pandemic.