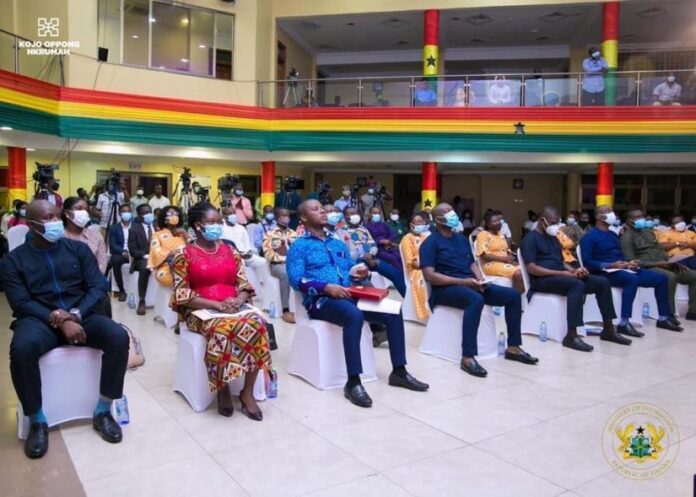 Six government youth agencies and programmes over the past three and half years have provided entrepreneurial support and empowerment to more than 2.5 million Ghanaian youth.

This came to light when the Chief Executives and Executive Directors of the six institutions rendered account of their stewardship at the maiden Nation Building Updates held in Accra, on the theme, “Leadership that delivers for the Youth”.

The support ranged from entrepreneurial skills training, training in information communication technology and online marketing, funding to expand micro, small and medium scale businesses and payment of monthly stipends to cushion them as they underwent various training programmes.

Mr Justin Kudua Frimpong, Chief Executive Officer of the YEA, in his presentation, said it had engaged 143,953 youth under its 14 modules in the last three and half years.

The Agency, he said, was established to provide employment opportunities for the Ghanaian youth with the objective of alleviating poverty.

Currently, a total of 1,000 young professional footballers under the Youth in Elite Sports were being paid GHc500 monthly stipend each.

Mr. Kodua Frimpong indicated that headcount and electronic validation conducted upon assumption of office in 2017, helped to save the nation GHS82.5 million after about 18,000 nonexistent beneficiaries were taken out of the Agency’s payroll.

Dr. Ibrahim Anyars, CEO of the Nation Builders Corps, said about 180,000 graduates applied for NaBCo employment, but the Agency was able to employ 100,000 of them and were deployed to the various government ministries, departments and agencies as well as private institutions.

He said after a successful implementation of the programme, it would commence transitioning them into permanent employment as the Scheme approaches its second anniversary.

For her part, Executive Director of the NBSSI, Mrs. Kosi Yankey-Ayeh, said the institution had increased its funding from GHS19,000 in 2017 to one billion Ghana cedis within three and a half years.

The funds, she said, allowed it to disburse loans to micro, small and medium scale enterprises for expansion.

Mrs Yankey-Ayeh said it had disbursed funds ranging from GHS2,000 to GHc100,000 to 200,000 businesses through the COVID-19 Alleviation Programme (CAP) Business Support Scheme, an initiative meant to deal with the social and economic impact of the pandemic.

She further explained that through key government interventions, the NBSSI had substantially reduced the unemployment rate and maximised the contribution of businesses towards the country’s socio-economic development.

According to her, 21,000 new jobs and 14,000 new businesses had been created and 4,500 businesses were diversified, while 37 Business Resource Centres and 185 Business Advisory Centres were established to offer technical advice to entrepreneurs.

Mr John Kumah, CEO of the NEIP, in a presentation, said the government had supported 9,350 businesses financially to make them competitive.

In addition, it had trained 10,000 students under the Student Entrepreneurship initiative and supporting 30 innovative entrepreneurs with financial assistance between GHS2,000 and GHS10,000 under the Presidential Pitch programme.

Mr Sylvester Mensah Tetteh, CEO of the NYA, said the government had trained 300 young people on Online Digital Marketing and entrepreneurship programme and a further 5,000 were given skills development in youth entrepreneurship.

Mr Mustapha Ussif, Executive Director of the NSS, said the Scheme had introduced online registration, which had reduced the chaotic nature of registering prospective service personnel to their respective postings.

The Scheme, he said, had rejuvenated its Borehole Drilling Unit, drilling 130 boreholes so far for various communities nationwide, while plans were far advanced to commission its bottling plant by the end of October 2020.

Durability & maintenance of a water tank

Social system too weak to keep children until 2021 – CRI

UN expert tells it how he sees it