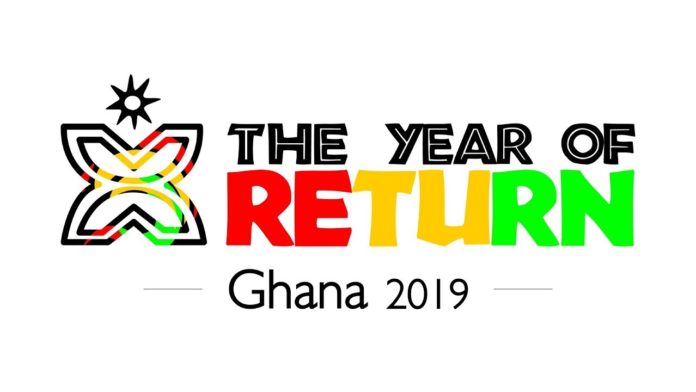 The ‘year of Return” may have been climaxed in 2019, but its socio-economic benefits and long-term impact on Ghana’s economy could redefine the African Diaspora as an important development path for Ghana and Africa.  Undoubtedly, the “Year of Return” was a strategic marketing and investment campaign targeting the African – American and to rediscover their roots, which has the potential of becoming an economic game changer.

Ghana’s Government took the first step when President Nana Addo Dankwa Akufo-Addo launched the ‘Year of Return” (1619-2019) in Washington, D.C. in September 2018. Its purpose was to commemorate the 400th-anniversary of the time when the first 20 West African slaves arrived in the Commonwealth of Virginia, which subsequently became part of the United States of America. Their arrival concretised one of the most unfortunate and barbaric episodes of human history – the Trans-Atlantic Slave Trade. Undoubtedly, not many Ghanaians, if Africans expected the event to make the huge impact it has made this far. The success of the event has compelled Nigeria and Benin to launch their own versions.  To begin with, the Tourism and Hospitality sector has been the biggest beneficiary of the ‘Year of Return”, given the share numbers hotel reservations and car rental services that called into business. At the last count, it was estimated that 800,000 visas had been issued to African Diaspora who had responded to the President’s call to return to their homeland. Reports indicated that the Ghana embassy in the United States was overwhelmed by the demand for visas that the government had to step in to assure airlines that passengers arriving in Ghana without visas to would be issued with visas at the airport.

One commentator suggested that future preparations dubbed,  “Beyond the Year of Return” should factor in the necessary ‘change of mindsets’ in all our dealings with our kith and kin. Africa, with a population of 1.2 billion has everything to gain by seeing these additional 400million as part of a huge powerhouse. With this huge number and resources, the rest of the world will have no option than to deal with Africa on equal terms. Thus, this is the time to revisit and actualize the ‘Africa Must Unite’ slogan which fueled the demand for independence in the early 1960s.

In a recent encounter with the media, President Akufo-Addo disclosed his government’s plans to make the  ‘Year of Return’ a permanent feature in Ghana’s effort to strengthen relations with other Africans from the Americas and the Caribbean. “Year of Return should be a permanent feature in terms of using it as a vehicle for solidifying the relations between Africans on the other side of the Atlantic, and ourselves and also of course what it does for our tourist revenues.” According to the President, the Ministry of Tourism, Arts and Culture in collaboration with the Ghana Tourism Authority is working to institutionalize the ‘Year of Return’ program by introducing a new instrument dubbed ‘Beyond the Year of Return and Birthright’.

“Let us all remember that the destiny of all black people no matter where they are in the world is bound up with Africa. We must help make Africa the place for investment, progress and prosperity and not from where our youth flee in the hope of accessing the mirage of a better life in Europe or the Americas” he said; and stressed that just like the Chinese in the diaspora were at the forefront of the economic revolution of China, African Diasporas can do same for the African continent. ” The time has come to engage Africans in the diaspora and all persons of African descent more positively in trade and investment co-operation, and skills and knowledge development.”

In furtherance of that the government has taken a bold step to tap the huge investment opportunities of the African Diaspora. Recently, the Minister of Finance, Mr. Ken Ofori Atta underscored the need for Ghana to exploit other sources of foreign investments; such as the African Diaspora. Subsequently, the Finance Ministry has launched the Diaspora Savings and Investment Account (the African Sankofa Account) to enable all people of African origin to lend to the government for long term investment.  Government is targeting US$3 billion in the first Diaspora bonds to be issues this year.   It is expected that the Diaspora Investment Account could become the huge source of Foreign Direct Investment.

All said, the untold story of slave trade in Ghana tends to ignore the connection of northern Ghana to the ignominious human trade. This disconnect has attracted many commentaries lately. One recent commentary was posted on social media by Mr. Andrew Atariwini. According to him, the convergence of thought provides that the year of return symbolises a critical landmark of the African story and perhaps, future unity. This represents a spiritual and birth-right mission of the Global African family, back to the continent to mark 400 years of the arrival of the first enslaved Africans in Jamestown, Virginia.This horrific and barbaric historical accounts are usually recounted as a sordid and sad period, when the active, potent and industrious sons and daughters of Africa were forcefully taken away and subjected to unimaginable deprivation, humiliation and torture.

Since August 2019, we have witnessed great personalities fly in and out of Ghana to commemorate the history which has become our identity. This has triggered real good economic dividend to the nation and deepened the contours of Ghana’s fine stable political environment. In fact, some leading opposition figures have described the “The Year of Return” as a smart move by the government. However, while the intervention provides the biggest platform to showcase Ghana’s culture and historical artefacts, the narratives have failed to capture the rejected, if forgotten slave sites of northern Ghana that complement the slavery enterprise, argues Atariwini.

One of the landmarks of slave trade in Ghana is the Salaga slave market. In the 18 and 19  centuries, Salaga which is in the East Gonja District in the current Savana Region served as a market and transit point for slave trade. The Salaga slave market was an important market from where slaves were transported to the coast for export. This explains why the Salaga market has been replicated in Jamestown in Accra. The Pikworo slave camp which was founded in 1704 and was active till 1845 was equally active in the slavery commerce (Siakwah, 2018, in Atariwini).  Both oral and written accounts corroborate the fact that, Pikworo was later relocated to Paga- Nania, in the Upper East Region of Ghana. It was originally developed as a slave transit center, where slaves were auctioned like any common commodity, and later sold at the Salaga Slave market, according to Atariwini.

See Also:  Book Review: The Shimmer In The Photo Album

Sadly the Ministry of Tourism, Arts and Culture has failed to maintain these historic and cultural monuments ; hence Ghana’s failure to maximize the huge economic potential of the sites.  Thus, as the President has declared the “The Year of Return” as a permanent feature of Ghana’s dealings with Africans in Diaspora, the northern equation of the Diaspora should be integrated into the story of “Year of Return.”. The government should as a matter of urgency allocate funds for the rehabilitation of the abandoned slave monuments in the north.   The Ministry of Tourism should encourage the African community around the world to extend their visits to northern Ghana, if they are to fully appreciate the story of slave trade in Ghana. The north has a rich cultural diversity and aesthetic art that have not been properly marketed to the African Diaspora.

Pan African angle
In a similar commentary on the topic on social media, Veteran journalist and Pan Africanist, Mr. Kojo Yankah noted that there is danger with government or partisan initiatives, which die with their initiators when they are not on the scene. To forestall this Mr. Yankah suggested that the YOR and  beyond should be anchored on a national/Panafrican historical narrative and tested institutions that will stand the test of time.

He congratulated the government for creating a buzz that has made all kinds of Impact and highlighted a few missing links and historical antecedents:
1. Year of Return is not just about Slave Trade; the Return started long ago from Ghana’s independence when WEB Du Bois, George Padmore, Martin Luther King, Malcom X, Muhamed Ali, Maya Angelou and many others flew in and out of Ghana.
2. YOR should have remembered Kwame Nkrumah, WEB Du Bois and others including JB Danquah and Ako Adjei, who in 1945 at the Manchester Conference instigated black unity.
3. YOR should have linked to Historically Black Colleges and Universities which produced Kwegyir Aggrey, Nnamdi Azikiwe, Kwame Nkrumah & others whose association with blacks impacted on independence in Africa.
4. YOR should know about Marcus Mosiah Garvey who moved enslaved Africans from America to Liberia & Sierra Leone.
5. YOR should have narrated the story of African slave descendants from New York and Jamaica who were reburied at Assin Manso.
6. YOR should have aligned with AU Agenda 2063 and the recognition of the African Diaspora as the 6th Region of the Continent.
7. The first 20 slaves taken out of Africa came from Angola.

No doubt the above ‘missing links” identified by Mr. Yankah and Mr. Atariwini could be invaluable to the continuous relevance of the “Year of Return.”  In fact, the event should be made a continental and national movement, whose socio-economic impact would to be harnessed from generation to generation.

Atariwini, A (2020) “The year of return: A disconnection of the northern half of the story.”

(***The writer is a Development and Communications Management Specialist, and a Social Justice Advocate.  All views expressed in this article are my personal views and do not, in any represent those of any organization(s). (Email: safoamos@gmail.com. Mobiles: 0202642504/ 0243327586/0264327586)

It’s time for Ghanaian developers to ‘up their game’ – Kofi...