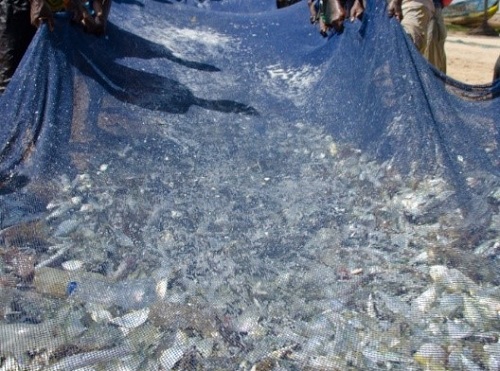 A number of commercial fishing vessels sanctioned for illegal operations in Ghana’s territorial waters have failed to honour the fines imposed on them by the Fisheries Commission, the Environmental Justice Foundation (EJF) has said.

The non-governmental organisation (NGO), whose activities are focused on environmental sustainability and security, for instance, cited that owners of Lu Rong Yuan Yu 956 vessel have refused to pay US$1million fine that was imposed is the statutory minimum under Ghana’s 2014 Fisheries Amendment Act.

According to the EJF, the vessel Lu Rong Yuan Yu 956 was caught, in June last year, with illegal nets and undersized ‘small pelagic’ fish onboard – the staple catch of the artisanal canoe fishers.

The trawler was apprehended with 405 boxes and 864 slabs of frozen mixed small pelagic fish species on board, generally below the minimum landing size. Other fisheries infractions included non-reporting of catch on board and the use of under-sized mesh nets.

The EJF said the Fisheries Commission confirmed that the vessel had docked at Tema port but failed to report a portion of its catch. It had then left Tema with the fish on board, with the intention of trans-shipping the fish at sea to a saiko canoe.

However, the owners and operators of the vessel after being sanctioned have refused to pay the fine, a development which defies the status of the Fisheries Commission.

The Group said the Fisheries Commission’s decision to publicly pursue the full US$1 million fine, last year, is very applaudable. “This is worthy of recognition,” but the NGO said since the act was passed other perpetrators have paid lower sums or undisclosed amounts in opaque out-of-court settlements.

See Also:  Cedi will be stable within the year – Finance Minister

“In 2017, for instance, the owners of a Ghanaian-flagged industrial trawler, Meng Xin 16, refused to pay a fine imposed by an out-of-court settlement committee in a case of illegal trans-shipment.”

They alleged that the vessel has since paid an undisclosed sum and has been re-licensed to continue fishing. “Another vessel, the Meng Xin 29, which was fined for illegal fishing in 2019, has also refused to pay and since been re-licensed to fish,” it was further stated.

Around 90percent of Ghana’s industrial fishing fleet is linked to Chinese ownership, an EJF investigation revealed in 2018. As Ghana’s fisheries laws prohibit foreigners from engaging in joint ventures in the industrial trawl sector, Chinese organisations operate through Ghanaian ‘front’ companies, using opaque corporate structures to import their vessels, register and obtain a licence.

In a statement issued by EJF, it said: “these underhand dealings have precluded attempts to ensure the true beneficiaries of illegal activities are held to account.”

Both the Meng Xin 16 and Meng Xin 29 are linked to a Chinese company a recent investigation by China Dialogue revealed. In the current case, the Lu Rong Yuan Yu 956 is also operated by a Chinese company, Rongcheng Ocean Fishery Co Ltd, according to the website of the Chinese Ministry of Agriculture and Rural Affairs. The company also owns another vessel that was caught in 2015 taking under-sized fish – juveniles that are crucial to replenish fish populations. They paid only GH¢200,000 in fines, well below the US$1 million minimum stated in the law.

EJF said, “the failure to sanction those who engage in illegal fishing – and especially the destructive trans-shipment practice known as saiko ¬– is driving the collapse of Ghana’s small pelagic ‘people’s fish’– and with them, the destruction of the livelihoods of canoe fishers and food security of coastal communities.”

Such has been the devastating impact of illegal fishing activities that Ghana now has to import around half of its fish, and local fishing communities are increasingly victims of the impact of rapidly declining fish populations, the environmental group observed.

The Executive Director of EJF, Steve Trent, said “According to the Fisheries Act, failure to pay the fine within 30 days results in the matter reverting to the court. It is now essential that the court uses all legal options available to require payment of the fine and accompanying sanctions to ensure deterrence.”

In addition to the fine in the 2014 Amendment Act, Ghana’s fisheries laws provide for forfeiture of catches and fishing gear, and terms of imprisonment for violations relating to the capture of juvenile fish and the use of prohibited trawl gear.

The failure to pay in this case is representative of a broader issue in Ghana’s fisheries sector, where local operators front for Chinese companies to obtain licences to fish in Ghanaian waters.

Trawlers operating under these local licences using the Ghanaian flag should be 100percent locally beneficially owned. Although the registered owner is, on paper, Ghanaian, in the majority of cases the controlling entity (or beneficial owner) is Chinese.

A report by EJF found that, in 2015, Chinese nationals captained over 95percent of trawlers with active licences to fish in Ghanaian waters.