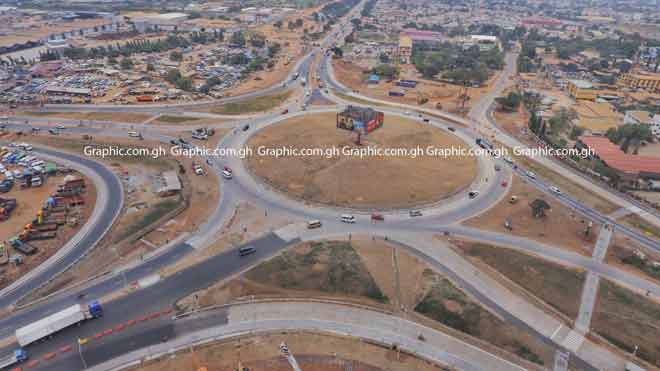 Work on the US$55.6million Tema Motorway Roundabout project is progressing steadily and will be ready within the scheduled time, the contractor, Shimizu-Dai Nippon JV, has assured.

Funded by the Japanese government through the Japan International Cooperation Agency (JICA), the Project comprises a 31.2-kilometre national trunk road that is expected to be completed in the next 16 months.

“We have completed 35 percent so far; concrete work, the excavation – and also out of four pedestrian networks three are ongoing,” said the Project Manager, Yujin Uemura,

He added. “Although we have some challenges, we will try to speed up as much as we can so that we can beat the target”.

Mr. Uemura spoke when a delegation from the Japanese Embassy and JICA, together with the media, paid the project site a visit to assess progress of work.

He said all aspects of the project, including the construction of an underpass tunnel, a pedestrian bridge, detour roads, expansion from Akosombo South to the Tema Motorway, are all going according to plan.

The project is under the West African Corridor Development Growth Ring (WAGRIC) Master Plan implementation, and when completed will replace the old roundabout to ease traffic on the Accra-Aflao highway and the Tema- Akosombo road, which intercept each other at the Tema Motorway roundabout.

It involves detailed engineering and reconstruction of the roundabout into an interchange and other ancillary works, including drainage, pedestrian walkways and landscaping.

According to the Project Manager, about 400 workers have been engaged under the project, in addition to those supplying materials.

On challenges, Mr. Eemura mentioned land dispute along the harbour stretch of the road as well as an overhead cable from the Akosombo end, and ongoing railway works on the Aflao end as factors impeding progress. The Tema-motorway forms an integral part of the Trans-Africa Highway and stretches from Lagos through Lomé-Accra, and Abidjan to Dakar, and effectively serves as the junction to the sub-region.

Phase-One of the Grade Separation project, which began in February 2018 and will last for 28 months, will see the construction of a 2.1km three-lane Dual carriageway with 730m Underpass on the National route N1; Improvement of approximately 1.9km of two-lane Dual carriageway on the National Route N2 from the Ashiaman Roundabout onto the Harbour Road; construction of Service Road Ramps, retaining wall and box culvert, road base and pavement; construction of Pedestrian Bridges; and provision of adequate Road Safety furniture to safeguard lives and property. However, Phase-two is set to commence after the successful completion of Phase-one – which comprises the construction of a flyover on the Akosombo-Tema Harbour Road

See Also:  Cedi to depreciate at a slower pace this year – Standard Bank