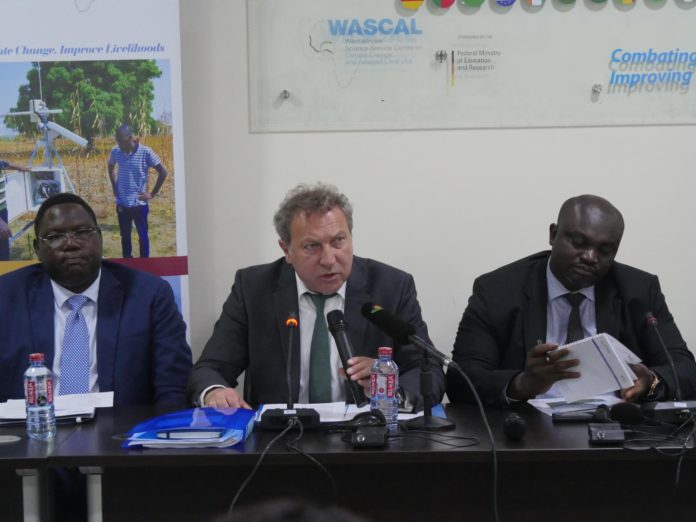 The Head of Division Global Change, Climate and Biodiversity at the Federal Ministry of Education and Research, Germany, Prof. Dr. René Haak has stated his government’s continuous support towards the efforts of its African partners in the fight against the impacts of Climate Change as part of the German responsibilities generated from the agreement of Paris and its contribution to the Sustainable Development Goals (SDGs).

“The establishment of The West African Science Service Centre on Climate Change and Adapted Land Use, WASCAL is the contribution of the Federal Republic of Germany to the fight against Climate change and Land Degradation.” He said.

Professor Haak said this when he addressed a cross-section of the media in the maiden edition of the WASCAL Media Engagement held at its headquarters in Accra. He disclosed the support BMBF has offered WASCAL since inception.

WASCAL-supported research, he said, will improve the understanding of climate and land management change impacts on the natural and socio-economic environment within the western African region. This is the reason why, according to him, the German Federal Ministry of Education and Research has supported WASSCAL with a new funding of 10 million for a new Research Call to be implemented from 2020 to 2023. In the first phase of 2010 to 2018 BMBF has invested in total co 25 million Euros in WASCAL”

He also indicated that The German Federal Ministry of Education and Research was supporting WASCAL with funding for up to 11 million Euros for the 4th batch of its Graduate Studies Programme with two new additional Graduate Schools on Climate Change and Marine Science in Mindelo, Cabo Verde and Climate Change and Informatics in Ouagadougou, Burkina Faso.

It is also worth mentioning that, with respect to capacity development of national and regional institutions WASCAL more than 50 Automatic Weather Stations have been donated and installed across WASCAL member countries in collaboration with National Meteorological Services.

The current processes, of global change, including demographic change, climate change and the globalization of economic systems, according to Professor Haak are an enormous challenge for societies worldwide. He, therefore, expressed the adverse impact of climate change globally and the role of the German government in tackling it,

“Climate change is affecting the lives of millions of people in all parts of the world. Current projections on future developments indicate that there is an urgent need to develop concepts on how to adapt to these challenges in due course. Science and research offer proactive approaches to deal with the current and the expected changes. In this regard, the role of science is to be understood as a service to those societies that are most severely affected by climate change and to provide decision-makers with evidence-based results and advice. The German Federal Ministry of Education and Research is very supportive to enhance this fight together with its partners.”

The Executive Director of WASCAL, Dr Savadogo, also responding to questions from the media, said the institution was operating within three key areas, namely, climate and environmental services, evidence-based and impact-oriented research and capacity building. He said the Centre continue to strengthen the research infrastructure and capacity in West Africa, through its graduate school by training maters and doctoral, the offering of thesis grants and in-service training.

Mr Peter Dery, the Board Chair of WASCAL, said the Ghana government was implementing climate change mitigation and adaptation projects, including one village one dam and the planting for food and jobs, to ensure sufficient food all year round as part of is efforts to meet the Sustainable Development Gaol 13 on Climate Action.

WASCAL is leading academic and trans-disciplinary organization building graduate-level scientific capacity and serving policy makers in West Africa with science-based advice on climate change adaptation and land use management. It cooperates with many agencies and universities v in the sub-region, providing a knowledge platform of excellence for its partners by pooling the expertise of Germany and its 10 West African member countries. It is a joint initiative of Bénin, Burkina Faso, Côte d’Ivoire, The Gambia, Ghana, Mali, Niger, Nigeria, Sénegal, Togo and Germany in response to the challenges of global change. Cabo Verde just ratified the WASCAL Constitution. Plans are far advanced to get Guinea Bissau and Liberia and Sierra Leone on board soon.

SMEs to benefit from big ticket contracts with multinationals