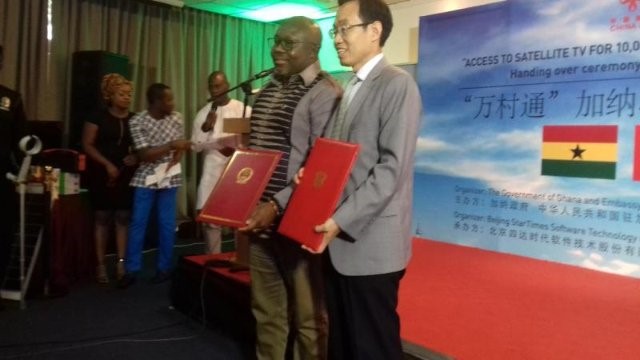 The Chinese Government has officially handed over the 300 Communities Satellite TV Project to the government of Ghana through the Ministry of Communications.

The project, which forms part of the Chinese government’s Access to Satellite TV for 10,000 African Villages Project, was successfully executed through its agency, Star Times Ghana – a Chinese multinational media company.

Speaking at the official handing-over ceremony, the Vice-President of StarTimes Group, Mr. Xue said: “This project indeed offers an opportunity for China and Ghana to deepen our relationship. It also affords us an invaluable opportunity in ensuring that the African continent and media development transitions to the next level”.

He added: “In modern times when information technology provides a wide range of opportunities for one to gather, process, store, retrieve and transmit knowledge and information, I believe this project has come at a good time to help less privileged communities meet the digital standard”. 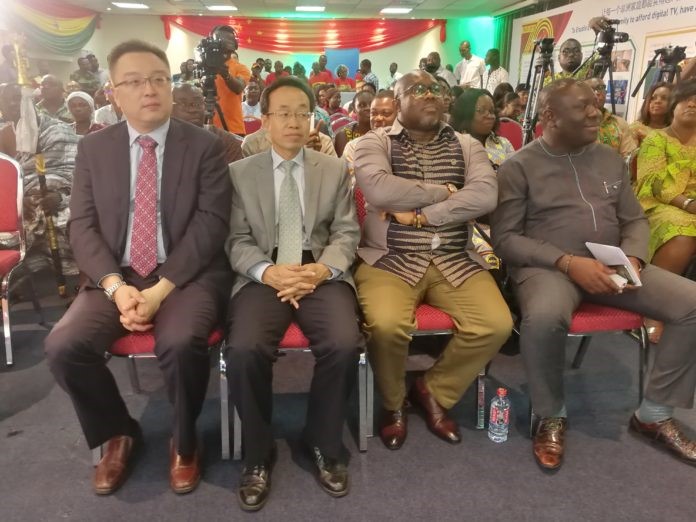 “Each community has so far received 20 decoders with dishes and accessories installed in selected individual homes, 2 projectors, TVs and a StarTimes TV with backup solar light installed at public areas consisting of schools, hospitals and community centres,” he noted.

For his part, Deputy Minister of Communications, Honourable George Andah said: “For government, television remains an important platform for communicating and disseminating vital information to the general public – predominantly through the news and public sensitisation campaigns”.

He commended the Chinese government for the initiative, saying that in the digital broadcasting environment, the proliferation of satellite TV across the country offers an opportunity for local and international content providers to develop exciting, relevant and quality programming that appeals to a range of audiences.

Earlier, the Chinese Ambassador to Ghana, Mr. Shi Ting Wang, said the project has so far provided more than 660 jobs to Ghanaians across the country.

He stressed that the project will go a long way in ensuring the African continent and media development progresses to the next level.

He further charged the government of Ghana to properly manage the project to ensure it serves its right purpose.