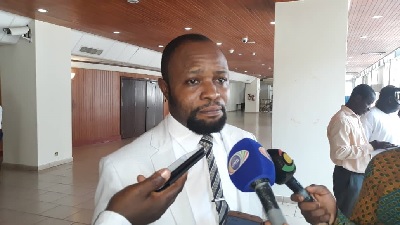 The newly appointed chairman of parliament’s government assurance committee, Collins Owusu Amankwah has resolved to hold government functionaries including ministers, members of parliament, and heads of institutions accountable in the discharge of their duties.

“I think it is important to give real meaning to democracy and for me one of the fundamental principles of democratic society is for the government to be held accountable and responsible by its citizens.

We as a committee has parliamentary oversight over the executive arm of government and as the orders stipulate we have to pursue or scrutinize all promises, assurances, undertakings given by ministers from time to time” he told B&FT in an interview.

According to him, it is about accountability and reckons people must be held accountable and responsible, especially ministers.

On when he intends to execute his agenda, he indicated that he has already kept in touch with leadership and is yet to meet members to see how best they can proceed together.

He also maintained that the committee’s power in terms of the scope of operations is not limited to the floor or plenary but outside parliament.

“All those promises been made by ministers, it does not matter the platform, once we are able to track the time you made those promises, it is our duty to scrutinise and also to ask you how far you have gone with those promises”.

Parliament has reconstituted the leadership of its committees, Mahama Ayariga, Joseph Yieleh-Chireh, Fiifi Kwetey, all Minority members, are some of the big names who have lost their positions in the latest change.

Mr.Owusu Amankwah replaced Manso-Adubia MP, Yaw Frimpong Addo, who takes over as chairman of the Environment, Science and Technology Committee which was chaired by the late MP, Emmanuel Agyarko and Former Deputy Agriculture Minister, William Quaitoo is now chairman of the Local Government Committee.

Aside from the fact that some replaced committee leaders are serving in the ECOWAS and AU Parliaments, it remains unclear the reasons behind some of the changes for the committee leadership positions.

Ghana has a unicameral Legislature composed of 275 Members of Parliament from single-member constituencies with an Executive President who appoints Ministers majority of whom by the Constitution have to come from Parliament.

Parliament operates very much on the lines of the Parliament of Westminster.

The Government, for example, cannot enter into any international agreement without the ratification of Parliament: and various such controls exist.