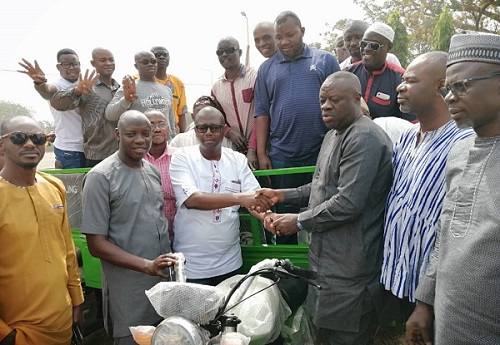 He said the gesture was to facilitate the work of the NPP in the region and to enable the executives reach out to supporters to explain government policies and programmes to them.

The tricycles according to the Minister, will also help the beneficiaries to earn income.

He said it important the party communicators and constituency executives intensified their outreach programmes in the region, especially as the 2020 general elections draw closer.

Dr. Awal further urged his party faithfuls to educate people on government policies such as the free Senior High School programme, Planting for Food and Jobs, as well as, others in entrepreneurship and industrialisation.

He said as a result of prudent policy measures undertaken by the government, macroeconomic environment has been stabilized. He added that government’s focus now is to transition from stability to growth.

He called on the party faithfuls to remain united behind President Nana Addo Dankwa Akufo-Addo and the NPP government to ensure victory in next year’s elections.

The Northern Regional Communications Team and other beneficiaries of the gesture, commended the Minister for his continuous support. They said the tricycles will go a long way to enhance their activities and to achieve the goals of the party.

The team led by the Director of the Northern Regional Communications team, Sule Salifu, was upbeat that the financial and logistical support from the Minister will help to propagate government policies and programmes to the people of the north and the nation at large.

Mr. Salifu assured the Minister that the tricycles will be used for the intended purpose.

New product to deal with potholes is an answered prayer