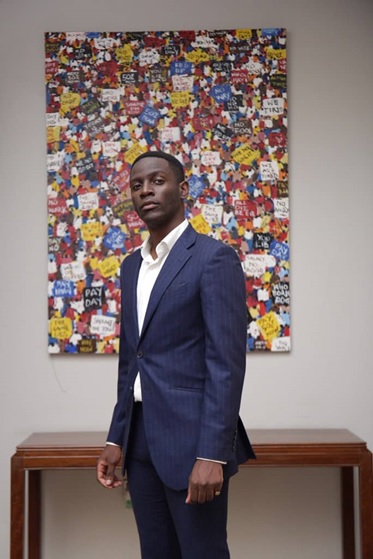 A tall, movie-star handsome young man, dressed in a dapper pinstripe suit welcomed me into the garden of his swanky Airport Residential townhouse for an exclusive interview. The breeze from the surrounding palm trees equalised the heat from the sun and created the perfect atmosphere for an afternoon discussion.

He stretched forth his hands to formally introduce himself, intensifying the squeeze of the handshake and, with an unpredictably deep voice, says “Pleasure to meet you. Call me Vince”. Vince is sitting on a low ottoman chair beside sunflowers, smiling and relaxed. Over the next two hours, we discussed the aspirations of, in his words, “the millennial generation, the new frontier of leadership and challenging the status quo.”

His gestures followed the rhythm of his arguments and exposed his overwhelming passion for politics. There’s an aura of mystery around his personality. He appeared calm and composed, but what began as a smooth soft-spoken interaction escalated into a fiery speech. I had to remind him, on the lighter side, that we were not at a campaign rally.

Vincent Letsa Kobla Djokoto was born in 1995 to affluent parents – his father is a lawyer and his mother is a teacher – and is a member of the Tenge-Dzokoto Royal Family of Anyako. Djokoto attended the very best of private schools, starting at the Christ The King School and finishing at The Roman Ridge School, both highly competitive and elite schools based in Accra. During his days at The Roman Ridge School, where Vince was elected senior prefect in sixth form, he was, by accounts of contemporaries, an intelligent, athletic and light-hearted boy, fascinated by history and politics.

At Swansea University, Djokoto studied law. He, however, rarely did any politicking as an undergraduate student. Instead, he joined the Singleton Lodge No. 8399, a noble fraternity renowned for its charitable activities and the Swansea Equestrian Society. He later enrolled at the City Law School, University of London to polish his legal skills as a postgraduate student.

Despite his posh background, Djokoto empathetically insists: “Ghana needs a modern post-tribal, all-inclusive political organisation that serves the interest of everyone and not just the privileged few,”

He started his professional working life “after considering a career as a soldier”, in the Legal Directorate of the Ghana Armed Forces in 2016.

When he left the Ghana Armed Forces, after a few months as legal aide, to become a legal clerk at the Judicial Service of Ghana, it was a deliberate decision that a broad career experience in the public sector was an essential element of the political package that he had been putting together.

A charming communicator and an avid columnist, Mr Djokoto has appeared on various television and radio studios. The public warmed up to the youth activist as he talked movingly on Metro TV’s Good Morning Ghana Plus, about his role model, Kwame Nkrumah.

The most remarkable thing about Djokoto is that he already sounds like a modern statesman, with a deep knowledge of the grassroots concerns as well as the wider aspirations of the Ghanaian electorate at large.  “The new frontier has got to look and feel and sound like the future,” he said.

What sets him apart is the depth and breadth of his ideas. Djokoto outlined his planned reforms on the economy, education, healthcare and foreign policy. His grandiose schemes even include a “Start-up Tower” that will headquarter the most innovative and profitable African businesses in Africa. He also believes “Tertiary education should be at the heart of an ecosystem of innovation that spans form universities, academia and tertiary institutions to venture capital and entrepreneurship,” he said.

There is an appeal in his charisma that may just be what the nation needs. Despite the fact that he has absolutely no political experience, Vince has a magnetism to him that would lure the public.

In his private life, he reads habitually, listens to music and spends most weekends at the beach. Vince is currently working on his debut book titled ‘Revolution’.