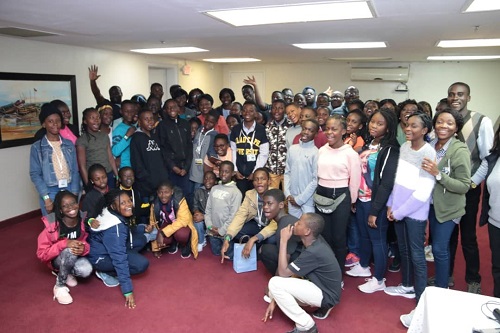 Ghana’s Permanent Representative to the United Nations, Ambassador Martha Pobee is advocating a renewed global commitment towards the future of young people. She wants governments to scale up their investments into youth-related interventions to safeguard the future of the world’s youth.

She was receiving a student delegation from Ghana who paid courtesy call on her to familiarise themselves with the workings of Ghana’s Mission to the United Nations. The delegation was in the United States of America to represent Ghana at this year’s Global Classroom International Middle School Model United Nations (GCIMSMUN) Conference in New York.

Model United Nations, also known as Model UN is an educational simulation programme by which students learn about diplomacy, international relations and the United Nations by role-playing Diplomats.

The GCIMSMUN is an annual event organised by the Lebanese American University in collaboration with the United Nations Association of the United States of America (UN-USA) and brings together students from various schools all over the world to deliberate and find innovative and practical solutions to pertinent global issues.

Ghana has over the years participated in the conference under the auspices of Lifelink Friendship Schools – Ghana.

Four members of the delegation; Kuku Agyinsam from Able Academy and Jacob Idan from Saps School won the Secretary-General’s Award for best delegates for their outstanding performance on the Historical Security Council which re-enacted the Nigerian Biafra War which occurred between 1967 and 1970. Their unique approach to finding lasting solutions to end the war set them apart.

Naa Akushia Otoo from Queensland International School and Afua Addo-Yobo of SOS Schools won the Honorable Mention Award for their active participation and role in building a consensus on the United Nations Development Programme (UNDP) which sought to find mechanisms of sustaining post-conflict economic growth.

“If we want a future, we must invest in those who will make that happen”, she said, and advised the students to be guided by what she called strong energy and environment conservation habits.

She was optimistic progress of work on the Sustainable Development Goals (SDGs) by various countries of the United Nations reverse statistics of young people who have stood for squandered potentials to millions of people whose capabilities and enthusiasm could greatly accelerate a developed and peaceful world.

The students expressed gratitude to Ambassador Pobee and her team for working hard over the years to maintain the good image of Ghana at the global level.

Also present at the meeting were the Head of Chancery of the Ghana Permanent Mission, Mrs. Vivian Serwaa Gyasi and the Executive Director of Lifelink Friendship Schools – Ghana, Mr. Ernest Gyimah-Danquah.  The delegation has since returned to Ghana.

MoH has designated the Ridge Hospital and Tema General Hospital as...

How insurance companies can build trust with content marketing