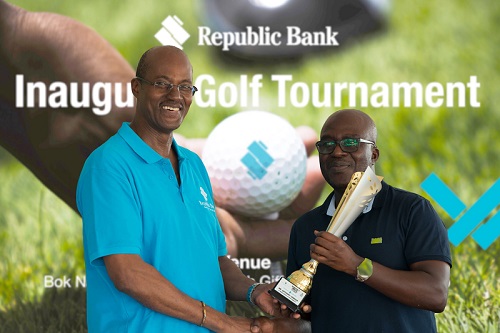 Speaking at the inaugural tournament, the bank’s Managing Director – Mr. Anthony Jordan, indicated how important the event is on the calendar of the Club, hence the bank’s commitment and passion toward supporting the event.  He recounted the long history of Republic Bank’s support to sport, which dates back many years.

According to Mr. Jordan, the year 2019 promises to be a great one for the bank.  He remarked that in 2018 the bank set itself on a new path of opportunities and growth with the rebranding exercise, and consequently on-boarded a number of blue-chip companies into the Republic Bank family.

“We are further committed to making banking an unforgettable experience for our customers by holistically training our staff; re-designing our branches; and digitising all aspects of our operations for a better customer experience,” Mr. Jordan said.

He further assured all present that the bank will continue to put more effort into improving other infrastructure, as well as modernising all aspects of its operations even further to position the bank as a world-class financial institution.

The Vice-Chairman of Bok Nam Kim Golf Club, Mr. William Hackman, when addressing the gathering recounted the Republic Bank’s history and further solicited the support of all members in making the club one of the best in the country.

The competition attracted golfers from a number of golf clubs in the Accra-Tema Metropolis, as well as the diplomatic community.  The men’s category ‘A’ was won by Hutton Addy, with Solomon Allotey and John Fiam-Coblavie in the second and third positions respectively.  Klaus Von Backustein won the Men’s Category B, with Ernest Asimenu and Sarwan Kumar in second and third positions respectively.

The Ladies event was won by 14-year old Aaliyah Idriss, with Jenny Le in the second position and Agnes Boachie placing third.

See Also:  EPL 2018-19 predictions by top sports journalists: How will it shape up?

Republic Bank’s vision statement has Building Successful Communities as one of its key pillars. The bank therefore ensures that as it works to deliver sustainable growth and shareholder value, it contributes to the wider community by being a responsible corporate citizen; a bank with a heart and an employer of choice.  To this end, the bank is committed to promoting and engaging in activities which benefit and enhance socio-economic development of the community and country as a whole.

The relationship race in the workplace:(3)

Macroeconomic Bulletin with Maxwell Ampong: EVOLVE or DIE – A timely...