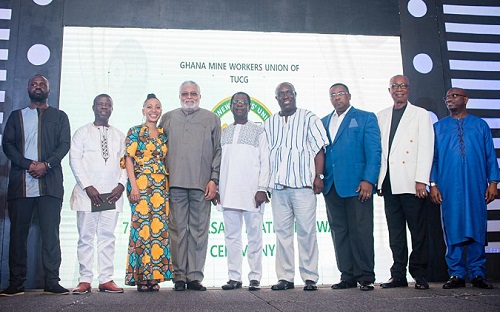 As part of activities marking the Diamond Jubilee celebrations of the Ghana Mineworkers’ Union, platinum awards were given to important personalities who have in diverse ways contributed to the mining industry’s success over the past 75 years.

Posthumous awards were presented to Dr. Kwame Nkrumah, first President of the Republic of Ghana; Ebo Tawiah, a former member of the Provisional National Defence Council (PNDC); the late Dominic Foevie, a former general secretary of GMWU; while former President Jerry John Rawlings was also awarded for his untiring efforts to better the fortunes of the mining industry during his tenure of leadership.

The awards ceremony brought together national officers and former general secretaries of the union, as well as representatives from some sister trade unions.

The General-Secretary of the Ghana Mine Workers Union, Mr. Prince William Ankrah, paid glowing tribute to former President Rawlings – who was the special guest – and observed that the mining sector under his leadership received priority attention, unrivalled by any other under the Economic Recovery Programme in 1983.

See Also:  Do not waste your child’s destiny

According to him, former President Rawlings’s regime implemented sector-specific policy reforms, and also promulgated a series of laws culminating in the creation of an effective regulatory framework that boosted foreign investment.

Mr. Prince William Ankrah also paid tribute to President Nkrumah’s vision and foresight, which led to the building of the Gold Refinery at Tarkwa.

Although there was no written policy to guide exploitation of the mineral resources, Dr. Nkrumah remained steadfast and resolved to sustain the mining industry. “Dr. Nkrumah nationalised the sector to protect workers’ right to employment, a catalyst for industrialisation,” he added.

Mr. Ankrah said Mr. Tawiah was recognised for securing tax-free paid overtime for the union and members of three other unions at a time when their salaries were meagre.

“Mr. Tawiah ensured that all distressed state institutions earmarked for privatisation were processed in line with laid-down policies,” he added.

Mr. Domnic Foevie, on his part, played a pioneering role in shaping the mining industry by building a vibrant labour movement as the former Chairman of the Trades Union Congress’ Executive Board.

Mr. Bright Wereko-Brobby, the Deputy Minister of Employment and Labour Relations, commended the Union for recognising the sterling role played by those renowned statesmen in the mining space.

He said increased investment in the sector over the years has led to sharp growth in mining output and employment.

Save the trees: a love letter to Accra

Goldfields says around 1,350 workers will be affected by new order