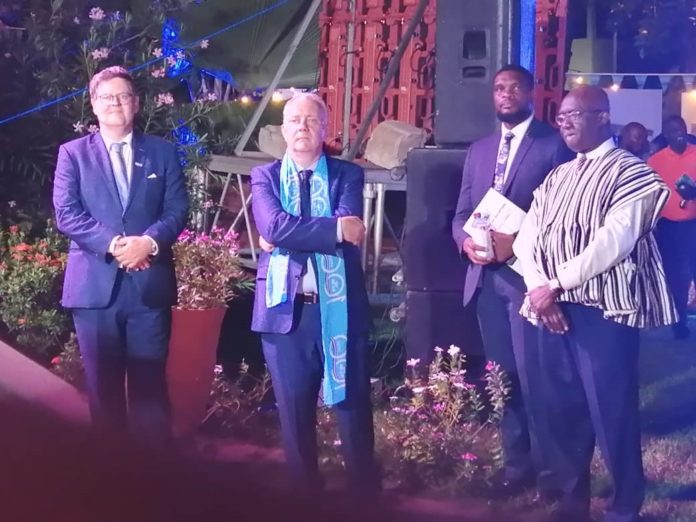 KLM Royal Dutch Airlines has commemorated its 100th centenary celebration in Accra, becoming the world’s first airline to still operate under its original name for one hundred years.

The airline celebrated with its global network and customers throughout the month of October with events in cities around the world to mark the historic occasion in 1919 when a young aviation pioneer, Albert Plesman, became the first chief executive of KLM with a dream: “the ocean of the air unites all people”, a network that connects all people.

“By cherishing our customers in Ghana and worldwide, embracing innovation and taking the lead in sustainability, we have created a beloved brand and a beautiful KLM family. With KLM’s 100th birthday, we proudly look forward to a bright future, ready for the exciting challenges and opportunities ahead,’’ he added.

Also present at the event was the Minister for Aviation, Mr. Joseph Kofi Adda, who announced that the Ministry of Aviation will, from next week, roll-out the Consumer Protection Directives and Passenger Rights guidelines to ensure the safety and protection of airline passengers’ rights.

He said the Directive was launched in June this year and covers the rights of passengers in cases of delays, cancellations, denied boarding and baggage liability for both domestic and international flights.

According to him, the Directive practices inclusion as it caters for Persons with Disabilities and spells out the service providers’ obligations to their customers, notwithstanding responsibilities of the passengers themselves.

The ministry is expected to continue implementing programmes aimed at ensuring   overall   service   delivery   and   customer   satisfaction through the Total Quality Management (TQM) initiative that would maintain high quality standards at KIA, as well as intensifying engagements with the Board of Airlines to address all concerns relating to effective service delivery and customer satisfaction.

In his speech, he noted that KLM has remained steady in the area of airline performers’ instability, like various transformations such as changes of ownership structure whereby some airlines have metamorphosed from being fully state-owned to private sector-driven.

He commended KLM for their efforts in rolling out programmes and initiatives in a bid to tackle global warming and climate change.

“KLM has not only been at the forefront of looking out for opportunities to mitigate the harm that aviation does to the environment; it has actually rolled out programmes and initiatives that are yielding concrete, positive impacts in these matters. For these pioneering efforts and achievements, it has actually been voted The World’s Most Sustainable Airline; and for 11 years has remained the industry leader under the Dow Jones Sustainability Index for the Transport Sector,” said Mr. Adda.

KLM used the 100th Anniversary celebration as an occasion to reaffirm its long-standing relations with Ghana since it was established in the country during1960, soon after Independence.

Building resilience in African firms; COVID and beyond