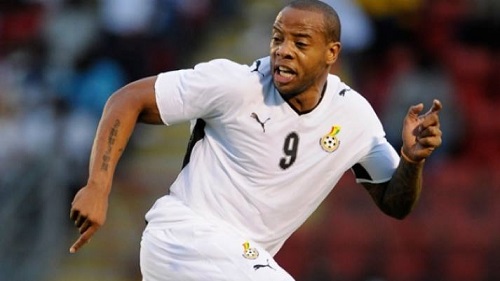 The former Zamalek player passed on in London on Thursday morning. Agogo was hospitalized in 2015 after suffering stroke which debilitated him.

He was remembered for his eye-catching performances for the Black Stars during the 2008 Nations Cup on home soil.

Former Ghana international Junior Agogo has revealed how he has been suffering after his stroke two years ago.

The 38-year-old in an interview in a BBC Four documentary titled Speechless revealed his troubles with speech following the illness which he says has left him lacking confidence and socially isolated.

The former Nottingham Forest and Bristol Rovers striker suffered the stroke in January 2015 soon after retiring from football, this subsequently led to Aphasia, which severely affects a person’s ability to use language.

According to the BBC, two years after his stroke when just 35 years old, Agogo is still visiting the Neuro Rehab Unit of the National Hospital for Neurology and Neurosurgery in London’s Queen Square as he battles to find his way in the world with depleted language.

‘I had thoughts but I’m saying, where was my voice? I was baffled, man,’ Agogo says during the interview.

The Guardian adds that: “Junior Agogo, formerly a Premier League footballer, talks well but loses his thread. Sometimes he runs in the park with his dog, but he is usually in his flat with his mother, or he stays in bed. He appears to have lost his self-confidence. He wants to be going somewhere but he cannot”.

Last Sunday was World Stroke Day and Agogo wants to help raise awareness of the condition, which affects around one in three stroke victims.

The forward began his career with the Owls, playing three games for the then Premier League side between 1997 and 2000.

He went on to score over 100 career goals, his most notable spell coming with Bristol Rovers, for whom Agogo scored 45 goals in 140 games between 2003 and 2006.

He also helped Nottingham Forest to promotion from League One in 2007/2008, finishing as the club’s top goalscorer as they finished runners-up in the division.

Agogo enjoyed a cult following during his 27-game stint with the Black Stars of Ghana scoring 12 goals.

The producers of the documentary, Speechless describe it as a “fascinating and moving, upsetting and uplifting in its depiction of the isolating and estranging condition, aphasia”

Special Prosecutor’s Bill not a requirement for prosecution –  Senior Minister

YARA : A Decade of Continued Excellence