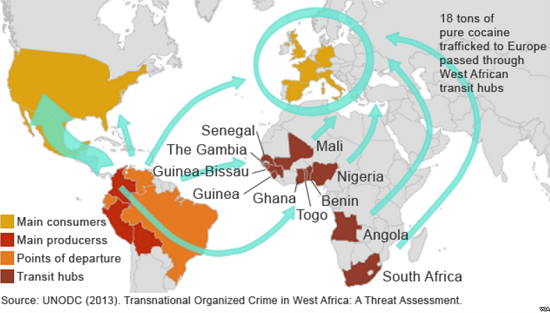 The Narcotics Control Board (NACOB) has intercepted 5,851 compressed slabs of cannabis in an operation at the Tema Port according to reports by Graphic online,
This is one of the biggest seizures in the history of narcotics busts in the country. The narcotics are estimated to have a street value of £29.2million.

The drugs were concealed in boxes of yam set for export to the United Kingdom, which has been one of the many ways in which drugs are successfully transited through the region to Europe and Asia. The 2013 report UN office of drugs and crime shows that 87 percent of pharmaceutical opioids seized globally came from western and central Africa, along with northern Africa. UNODC also estimated that in 2016 there were more than 34 million cannabis users in west and central Africa as well as 1.8 million cocaine users.

Several Checks by NACOB revealed that the cannabis was compressed in yellow cellophane underneath all the boxes.
Two suspects have so far been arrested in connection with the bust, while a third one is on the run.

The suspects, Dominic Kojo Amenyo and Osae Akotua, are both freight forwarders at Tema Port and were handling the yams with cannabis; while the third suspect, one Bright – also a freight forwarder, is reported to be on the run.
The security agencies first became suspicious on March 7 when the yams were in storage for Customs checks before export; however, Dominic Kojo Amenyo told police he was on his normal rounds when Osae Akotua called him to assist with the said yams containing the narcotics.

According to Amenyo he did not know the actual exporters or owners of the boxes containing the yam. This does not really surprise many, as Ghana as well as the West Africa region have been battling with ways to keep the security system safe from Narcotics trade and/or trafficking.

The region’s security systems over the years have faced several challenges on recovering drugs which are being transited from Ghana through Nigeria to sub-Saharan Africa through to Europe, Latin America and Asia.
The security agencies in Ghana, together with other agencies in the region, are trying hard to ensure that the continent is safe and free from narcotics, which have contributed immensely to the war on drugs killing thousands and or millions of people worldwide. The Executive Secretary of NACOB, Francis Torkornoo told the Graphic that his outfit has been cooperating with the Ghana Revenue Authority and Police at Tema Port on the status quo.

The United Nations Office on Drugs and Crime estimated that US$1.25billion worth of cocaine passed through the region in 2010 alone. The three main areas for cocaine trafficking in Africa comprise northern hub made up of Guinea-Bissau, Guinea, The Gambia, and Senegal; the southern hub of Benin, Togo, Ghana, and Nigeria; and the eastern hub of Mali and Mauritania.

Seizure data show that cocaine trafficking through West African waters declined significantly in the period of 2004–2009, but this claim should be treated with some scepticism. Although it is possible that trafficking declined, it is also likely that more sophisticated methods and/or ways, such as the use of container ships, are allowing traffickers to move illicit goods to other points unnoticed or without being caught. Several record-setting seizures of cocaine off the Western Sahara coast as well as on land show that this route is still operational.

Communicating in the digital age: Essential skills for success in the...

One household One Waste Bin:  …A great way of controlling...