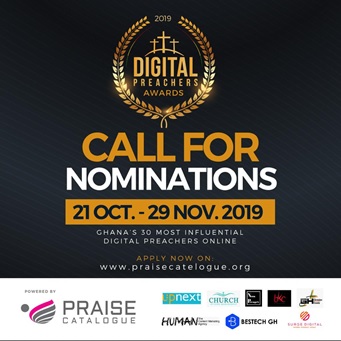 Digital Preachers Awards is an awards scheme that seek to celebrate Christian excellence in the digital space. The award seeks to inspire and equip the “Church” to communicate credibly, effectively and powerfully as they continue to strive for excellence in PREACHING the uncompromising gospel of Jesus Christ DIGITALLY.

The awards scheme is open to Ghanaian residents only. Nominations open on 21st October, 2019 and close on 29th November, 2019. Winners will be announced on the 18th December, 2019. Churches/Ministries/individuals can nominate themselves and/or nominate others for the awards. Visit the website below for information on nominations

The digital space is creating a spot for everyone – a spot for big corporations as well as start-ups. The powerful tools websites and social media platforms have become in driving causes cannot be overstated. Fortunately, the “CHURCH” has not been left behind.

Churches and/or Christian ministries have picked their spot and placed their mark as they aim to propagate the gospel, and indeed many have done so excellently. We at Praise Catalogue, recognize and believe in the work and devotion of such ministries thus the creation of “Digital Preachers Awards” to reward such excellence as we all seek to accomplish Jesus Christ’s Great Commission in Matt. 24:14.

Cash for NTEs to increase under AfCFTA

Why this delay in the passage of the RTI bill?