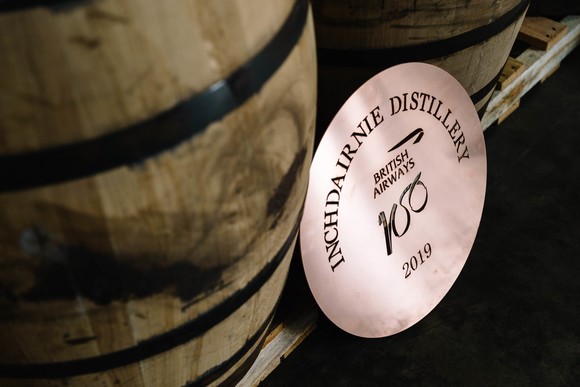 British Airways has pored over its 100 year-old history to create a limited-edition whisky with InchDairnie, the modern Scottish distillers.  The partnership will culminate with a centenary dram being served up in 2031.

To mark World Whisky Day on May 18, the two British brands have come together to start the 12-year process of creating a limited-edition pour for the airline’s centenary.

British Airways joined the expert distillers at the Fife-based distillery to mix malted barley, water and yeast before distilling and pouring it into a bespoke American oak cask once used to mature bourbon. The cask heads are from a red wine cask, made from French oak, in a tribute to the first flight operated by AT&T – the forerunner company of today’s British Airways which flew to Paris in 1919.  The American oak is a nod to British Airways, as the airline now makes up to 30 journeys across the Atlantic every day.

Over 12 years the spirit will mature, drawing out vanilla and coconut flavours and a dark colour from the cask, before ageing to create a malty, fruity, Scotch whisky designed to work perfectly at altitude. The cask-aged spirit will then be decanted into 300 limited-edition bottles that will be served exclusively on British Airways flights in 2031.

Kelly Stevenson, British Airways’ Wine and Beverage Manager said: “Celebrating our centenary is all about honouring our airline’s history, as well as looking to the future.  InchDairnie has a modern and innovative approach to whisky distilling and we’ve incorporated touches with a nod to our history.  In years to come, our customers will be able to enjoy it from the comfort of their seat – we know it will be worth the wait”.

Ian Palmer, Managing Director of InchDairnie – who has been distilling whisky for more than 40 years said: “We’re delighted we’ve been able to create a very special whisky for British Airways in their very special year. Although we are a new distillery that has a much younger heritage than British Airways, through the use of industry-leading technology we are bringing together decades of industry experience and knowledge, enabling us to fine-tune one of the most meticulously designed distillation processes in the world”.

Flyers can also own their own bit of history as InchDairnie has created the ultra-exclusive Centenary Cask programme, which will be showcased at the airline’s brand-new First bar in New York from June. Just 12 casks are being offered exclusively to British Airways customers between now and the end of September, and each cask will have its own unique taste profile.

British Airways has released a series of centenary editions in partnership with British brands during its centenary. The airline has partnered with Scottish craft brewer, BrewDog, who created a transatlantic IPA for customers and has also teamed up with Marmite, who have created a centenary branded jar. As Marmite is the most confiscated brand at airport security, the travel-sized jar is conveniently sized to fit within the liquid allowance.