The Bissa Fitness Club has paid a visit to former Youth and Sports Minister, Dr. Mustapha Ahmed ahead of the Club’s official launch scheduled for the 5th October, 2019.

The purpose of the visit was to officially invite the former statesman to the event set to take place in Accra. 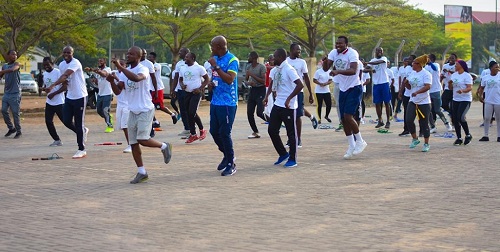 The club, since its inception in 2017, seeks to improve the well-being of its members through fitness, as well as foster unity among the Bissa Ethnic Group and its adjoining tribes in Ghana.

During the meeting, executives of the club led by the President, Hussein Hassan Yorda, called on Dr. Ahmed to honor their invitation as well as offer them any form of counseling that could help in reaching their set goals.

Mr. Yorda said: “We have come here to formally invite you to the launch of Bissa Fitness Club later this year, a we regard you as one of the esteemed sons of Bissa. We know how much of a busy person you are, but we are also aware of roles you have played in projecting the image of Bissa for which reason we cannot organize such an event without requesting your presence.

We are also respectfully requesting any form of help and advice that you can offer to enable us put up a very successful program which will project the already good image that we have,” he added.

On his part, Dr. Ahmed who is currently aspiring to be the NDC’s parliamentary candidate for the Ayawaso North Constituency, commended the group for taking such initiative, and pledged his support to ensuring that the club achieves its objectives.

“I first of all want to congratulate you, Mr. President and your team of executives for the good job you have done so far with this initiative. I feel very proud watching from a distance the way you are going about your business, and I rest assured knowing that when we fade out, we have brilliant young people like you who will be the torch bearers.

I will do the best that I can to also ensure that you people stay within the course of what you want to achieve. Thank you for inviting me,” he remarked.

As part of activities lined up towards the club’s inauguration later in the year, the group has also embarked on weekly visits to some prominent members of the Bissa Community and beyond to raise awareness about the upcoming programme, and also invite such reputable persons to attend.

Other activities set towards the launch include, outreach programmes, a football match involving the men and women of the club, and a float, among others.

Remove all taxes on LPG if it can’t be subsidised –...