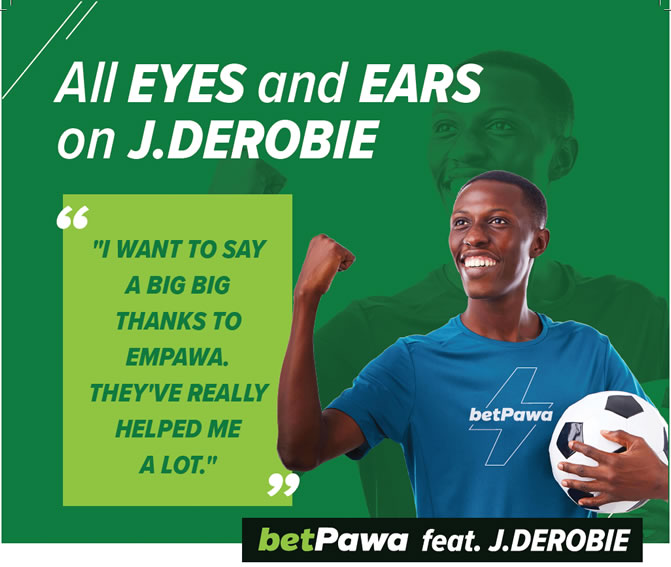 “I WANT TO SAY A BIG BIG THANKS TO EMPAWA. THEY’VE REALLY HELPED ME
A LOT.”

It’s only been four months since his inspiring breakthrough single Poverty, but J.Derobie has quickly become the talk of the music world.

The YouTube video has over 1.2 million views, while he’s been praised by established performers like Stonebwoy, Shatta Wale and Sarkodie.

It’s not just in Ghana that the artist, born Derick Obuobie Junior, has gained admirers. He’s also a hit in Jamaica, with Popcaan so impressed that he recently collaborated on a Poverty remix.

But the emerging dancehall star’s biggest celebrity fan is the man who helped him find fame, Mr Eazi. The Nigerian singer picked him from thousands of entries in emPawa’s $300,000 search for Africa’s next generation of superstar musicians.
J.Derobie made the final 10 and his single, featuring Mr Eazi, is the emPawa YouTube channel’s most viewed. However, the humble 24-year-old still does voluntary work for the Births & Deaths Registry.

emPawa is overseen by betPawa, who create similar success stories by encouraging customers to bet small win BIG. Their minimum stake is just GH¢ 1 and their win bonus goes up to 135%, so successful players can more than double their winnings.

betPawa promote responsible gambling, making it easy to bet safely and securely online, and their mobile-friendly site uses very little data.
Experience it for yourself:
WWW.BETPAWA.COM.GH

Invest In Africa schools SMEs on procurement and finance