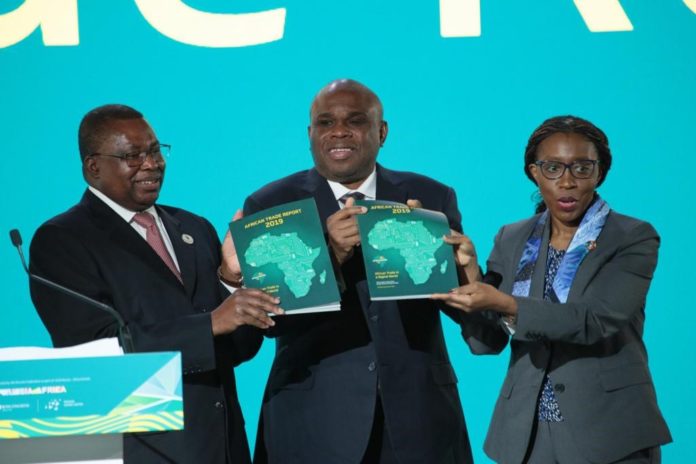 Africa’s total merchandise trade in 2018 was valued at approximately $997.9 billion, showing that the continent remains one of the fastest growing regions in the world. Africa’s output grew by 3.4 % between 2017 and 2018 despite the slowdown in global growth during that period, the African Trade report 2019 has indicated.

According to The African Trade Report 2019, the findings highlight the resilience of Africa’s economies to global volatility at a time of rising uncertainty, escalating trade wars and tariffs between the United States, China and others.

The resilience reflects the diversification of Africa’s trading partners in the context of South-South trade, growing fixed investment and public and private consumption, boosted by expanding urban populations and softening inflation. These factors reduce Africa’s exposure to the business cycles associated with individual countries and regions.

The report noted that while the European Union remained Africa’s main continental trading partner in 2018 – accounting for 29.8 % of total trade – African trade with the South grew significantly over the last decade to account for more than 35 % of the continent’s total trade in 2018.

China and India further consolidated their positions as Africa’s first and second single largest trading partners, accounting for over 21 % of total African trade in 2018. Intra-African trade also increased steadily in 2018, growing by 17 % to reach $159 billion.

The report highlights that Africa has the potential to do more, noting that its contribution to global trade remains marginal at 2.6 %, up from 2.4 % in 2017, and that, while intra-African trade rose to 16 % in 2018 from 5 % in 1980, it remains low compared to intra-regional trade in Europe and Asia.

The report states that on-going digitalisation is paving the way for a new African economy, with e-commerce platforms and internet penetration expediting transactions, reducing costs and leading to a new generation of transnational digital consumers.

The report urges African governments to further capitalise on the opportunities associated with digitalisation, by bolstering regulatory environments and supporting the development of digital ecosystems.

Digitalisation, the reports states, can unlock Africa’s potential in driving economic development and the integration of African countries into the world economy. It can also reduce the region’s dependency on raw commodities and natural resources by helping economies diversify into more value-added products that can enhance extra-and intra-African trade.

Prof. Benedict Oramah, President of Afreximbank, said: “It is vital that Africa grasps the economic growth opportunities flowing from the African Continental Free Trade Agreement, growing domestic demand and population and our ever-closer investment and trading links with emerging partners in the South. We must exert concerted action to ensure that we develop, industrialize and diversify our industries and supporting infrastructure to foster regional integration and participate fully in regional and global value chains.”

Chief Economist and author of the report, Dr Hippolyte Fofack said “Intra-African trade, which grew by 17 % in 2018, more than three times the rate of growth of extra-African trade, was the major driver of Africa’s total merchandise trade in 2018.”

Afreximbank’s Africa Trade Report 2019 was launched at the Afreximbank Annual Meetings by Amb. Albert Muchanga, Commissioner for Trade and Industry of the African Union Commission, and Prof. Benedict Oramah, President of Afreximbank.

President of Afreximbank Prof. Benedict Oramah (middle) presents the launch of the The African Trade Report 2019 in Moscow today. He is joined on stage by Amb. Albert Muchanga of the African Union Commission and Vera Songwe of the UN ECA

Trade turnover between Africa and Russia to double by 2023.

The trade turnover between Russia and Africa will double in the next two years, trade experts have predicted.  Last year, the total export volume grew by 18% and reached USD $17.5 billion, at the same time, the volume of non-energy and non-commodity exports was recorded around  USD$ 14.3 billion.

See Also:  The Dilemma of Maintaining the Same Standard of Living Post Retirement

These and more were made known at the official lunch of the Afreximbank Strategy for Export Trading Companies   in Moscow during the opening of the Russia–Africa Economic Conference as  part of the Afreximbank Annual Meetings with the support of the Roscongress Foundation and Russian Export Center.

The panellists included Managing Director of Afreximbank’s Intra-African Trade Initiative Kanayo Awani and Deputy Governor of the Central Bank of Egypt Gamal Mohamed Abdel-Aziz Negm. One of the key focal points of the discussion at the event was the strengthening of trade and economic relations between Russia and Africa.

In a submission, Andrey Slepnev, Chief Executive Officer of the Russian Export Center (REC) said the African continent currently has enormous potential as a sales market. According to him many African countries are enacting economic reforms and demand is growing for high-quality competitive products.

He said Russian businesses are interested in this niche, and Russian goods are already competitive in terms of price and quality and there is a plan to increase export volumes in the next few years.

A Russian Industrial Zone is currently being built in Egypt’s Suez Canal Economic Zone. This is the first such infrastructure megaproject launched by the Russian Export Center (part of VEB.RU). Residents of the industrial zone will have several key advantages: proximity to vital transport canals, a number of trade agreements with Egypt, extremely simplified business regulations, and a single point of contact for solving any problems or addressing any issues.

In the next five years, this 525-hectare area will be transformed into a comprehensive industrial park for Russian companies. In the future, the Russian Industrial Zone will serve as an outpost for promoting Russian goods and services in Africa.

Africa’s only hope is industrialization