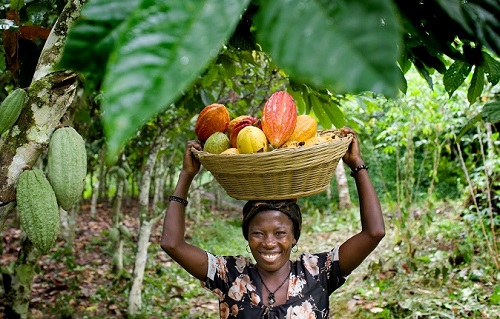 Do women have a role to play in curbing the problem of child exploitation on cocoa farms? This article will seek answers to this question and unearth recent interventions if any, which have been introduced to empower women in cocoa growing communities as a means to reduce the threat of child labour.

There has been a discussion on the forms of child labour as seen on cocoa farms in Ghana and the reasons why they pertain in a previous article. Other articles have highlighted the key role that children in cocoa growing communities could play in sustaining future cocoa production, and hence the necessity to improve the quality of life of the rural child as one sure way of securing the future of cocoa production.

Child labour in its worst forms continues to threaten the sustainability of cocoa industry in Ghana. Key international stakeholders are incessantly embarking on various initiatives and collaborations to mitigate the practice and the threat it poses to society. The underlining objective is to discourage the undue abuse of innocent children in an industry that fetches close to USD2 billion of foreign exchange to the Ghanaian economy on a yearly basis. Globally, such interventions are expected to eliminate the practice which exploits children to the benefit of national economies and chocolate lovers.

Recently, there was a call by two United State Senators from Oregon and Ohio for the United States Customs and Border agency to block the import of cocoa from destinations that are known to practice child labour. The fight seems unabated but the concern is how widespread and notable such initiatives have been in preventing child labour in cocoa communities in Ghana.

How women can be empowered

The singular role of women as homemakers and nurturers of children put them at the forefront of confronting child labour practices. Women especially in cocoa communities should be empowered to act as protection for children. Protection should take the form of them instilling measures that prevent their children from exposure to undue labour.

Another means of protection is to equip women to adequately provide for necessities of children particularly in terms of food, shelter, and education which is necessary to the development of every child. The expectation would be for such women to rather take up a nurturing role where necessary in helping children acquire farming skills in an acceptable manner. This is where women would feel empowered to nurture children on cocoa farms.

Rural women can only initiate such actions when they are mentally and financially empowered to do same. This comes with implementing interventions that would ensure they take responsibility for their children. Interventions should take the form of income generating activities aimed at alleviating poverty. Financial empowerment would arm the women to effectively guard against exploitation of children for meagre compensation.

The nature of poverty which pertains in rural areas creates possible child truancy due to idleness which may in effect result in child labour. An impoverished woman would certainly not be in a position to prevent her children from engaging in undesirable practices because of the inability to provide basic care for them.  Hence financial empowerment of women in rural community is a key ingredient to the fight against child labour.

Beside financial empowerment, mental capacity of rural women should be developed. It would enable them to realise the important role they play in this fight. This could be achieved with capacity building using effective communication tools. The aim should be to replace crude and subservient thinking with self-confidence and an urge for personal and community development. Empowerment for change can only be achieved with a positive mindset and a “can do” spirit.

Recent interventions by some organizations

Cocoa Life is an international agency launched in 2012 which operates in six cocoa growing countries including Ghana. The agency’s aim is to empower cocoa farmers and to eventually create improved living standards in cocoa communities. In Ghana, Cocoa Life focuses on training regarding cocoa farm maintenance and issues related to the prevention of child labor. In recognizing the important role of women in curbing child labor, one of the agency’s objective is to empower women at household and community level. Empowered women understand and ensure the development needs of children are met, and would also push for their children to remain in school

In another development, Solidaridad Network in partnership with Cocobod launched the Ghana chapter of Women in Cocoa and Chocolate Network (WINCC) in 2018. This is an international Network that creates a forum for women working in cocoa and chocolate to connect, learn and take inspiration from peers. The objective of the network is to equip Women to assume leadership roles in communities.

The World Cocoa Foundation (WCF), an International organisation whose vision is to see farmers prosper and cocoa communities developed has introduced interventions to improve cocoa farming in West Africa and enhance economic empowerment of women in cocoa growing communities. In view of this, the organisation initiated a program with the Walmart Foundation to train close to 70,000 farmers (50,000 women and 20,000men) in Cameroun, Cote D’ivoire, Ghana, and Nigeria between 2014 and 2016.

This is to name a few of various interventions aimed at women empowerment to curb child labour on cocoa farms. The reality may be far from what has been discussed and, in another article, I intend to unravel how impactful such projects have been in equipping women to remain at the forefront of the fight against child labour.

Amma is a management consultant with M-DoZ Consulting based in Ghana. She has 15 years of industry and consulting experience and served companies in various industries in the area of strategic planning, policy analysis and industry research. Contact her on email on amma.antwi@ghanatalksbusiness.com

40 Ghanaian companies to go on oil and gas trade mission

Procurement officers must be licenced—PPA Board Chair