Who taught you about sex? How did that teaching shape your attitudes to your body, to others bodies, to sex itself? Did that learning happen in one session, was it in stages? Was it your parents, friends or was it at school? Was sex about pleasure and power or was it about marriage and babies? Was there sexual abuse or sexually inappropriate advances towards you? How did that and the legacy of untreated trauma from it shape your attitudes and approach to sex as an adult?

The current furor about the newly introduced Comprehensive Sexuality Education guidelines has ignited a firestorm about sex, sexuality, culture and education.

Listening to multiple discussions on radio, reading multiple exchanges across WhatsApp, social media, I am reminded that in the age of information, misinformation travels fast and is almost impossible to stop. And that is clearly what is happening with Comprehensive Sexuality Education (CSE).

Our airwaves have been abuzz with discussion, engagement, expert commentary and call ins. The call-ins reveal how powerfully misinformation dominates.

From the Church, Religious leaders and bodies, there is outrage that a nation of children are being pummeled with an LGBTQ agenda. They have taken to the airwaves with their outrage, and that is now shaping ideas about the CSE content.

And this is part of the issue.

As a nation, there is a consistent failure to follow policy or documents with a national implementation and communications strategy targeting those most affected to ensure they are fully understood. The failure to do that means the document is buried under headlines, outrage, agenda and misinformation.

The CSE Guidelines is a 33-page document. In this age of so much information flying across so many avenues – fewer and fewer people read entire documents. That should inform an implementation approach. It hasn’t. And it should have.

There is no such thing as comprehensive sexuality education – it simply cannot be ‘comprehensive’. What it could have been is ‘Culturally Sensitive Sex Education’. Language matters. How you describe something matters. Considering culture, context, community and sensitivities matters. CSE guideline’s writers needed to reckon with the languaging of the content and the title.

I have read the guidelines. I was struck in the Foreword by the dizzying number of Conventions, Treaties, Recommendations Ghana has signed on sex education and reproductive health education. I noted the background to current policy and the intention to streamline how sex education is taught in school and by community organizations focused on reproductive health.

The intention makes sense. The approach does not. The execution is woeful.

Of course, there should be sex education in a nation.  Children should learn about their bodies and what they do, just as they learn their A, B, Cs and what language means and does. What they learn, how, who teaches it, when and where they learn matters. Age appropriate lessons matter.

Who should teach young people and children sex education will always be up for heated, contentious and unresolved debate? Some will say parents should do it. Others that schools should play a role. Some argue the Church’s role – that of religion – is crucial.

Parents. Some parents will teach their kids, some won’t, some can’t, some don’t know how. Some are uncomfortable, some are traumatized from sexual abuse and its legacy, some use shame which shuts kids down, but doesn’t necessarily stop them from seeking information – or misinformation – elsewhere. These are the realities. We need to deal with them.

School. Schools have taught varying forms of sex education. Some students may say it is woefully inadequate. It relies on how teachers engage the issue.  But schools in Ghana have been places where sexual abuse takes place from primary through to SHS. Research reveals that, as do media reports. What happens if that teacher giving lessons in comprehensive sexuality education abuses their position and power and is sexually abusive or inappropriate? Where is the comprehensive policy that enables students or other teachers to report such abuse, and have it investigated without intimidation, victimization or retribution? Having a sex education policy is one thing. Ghana needs – and has always needed – a comprehensive structural child-centered policy for reporting sexual abuse in schools. While we think so much about sex and how it is taught, we don’t think enough about sexual abuse and safety in schools and how policy can prevent, protect, empower students. Nor how those teachers who are culpable should be reprimanded, punished and ejected more effectively.

Church. Ghana is a secular country in principle, it is Christian in practice. By that I mean so much of what is defined as Christianity informs and shapes how things are and are not done across multiple sectors. Whether or not you agree, it certainly must be considered when implementing something as sensitive as sex education. Right now, religious leaders and bodies have commanded the narrative with their focus on LGBTQ issues. Church sermons teach sex through silence, shaming and stigma – that too is a problem.

The lack of any clear communications implementation strategy creates a gap. That gap has been filled by others leading to confusion, misinformation, narrative-grabbing and our current state of articulated wahala on CSE.

Reading the Guidelines, there clearly was consultation and engagement with stakeholders, and some of those who work in the world of reproductive health and sex education. But whatever there was, it was not nearly enough.  Content is one thing, communicating that content is something else.

CSE is global. That is itself an issue. It may have a global vision, but it needed a purely cultural, national and local sensitization. The failure to do that makes moving it from the page through the public, the parents and into the classroom a nightmare – one we’re experiencing. And it leaves the Minister of Education on the backfoot, defending what it is, explaining what it is not.

As global as it is, CSE funding has been rejected by seven states in the USA; Florida, Indiana, North Dakota, Kansas, Texas and Virginia. Those states want an abstinence curricula. It sits in the political  context and sensitivities of  some state’s conservative and white Evangelical values. They dismiss CSE as a ‘left-wing conspiracy’. Their politicization reflects the climate that exists in America where there is a hostility to Planned Parenthood – one of the CSE visions – and an attack on its work, funding as well as misinformation about what it actually does.  Those political realities are shaping how CSE is being received and communicated there. That in itself is problematic.

Ghana is not North Dakota. Our context and our culture is not the same.

Culture, context, narrative, framing matters. Discard those at your peril. Deal with the consequences if you do.

And that is the reality facing CSE.

Teachers. We are all shaped by them, what they do in the classroom and how they do it. We all have that one teacher who affirmed, nurtured, encouraged or challenged us.

Who was that teacher to you?

#whoTAUGHTyou : CELEBRATION, CONTRIBUTION, POWER is a multimedia project featuring VIDEO, PODCAST, SOCIAL MEDIA DISCUSSION. Created and led by EAA Media Productions in partnership with the Ministry of Education, the National Teaching Council, and inspired by Dr. Mary Ashun, Head of Ghana International School. It features four of the finalists from 2019 Ghana Teaching Prize. 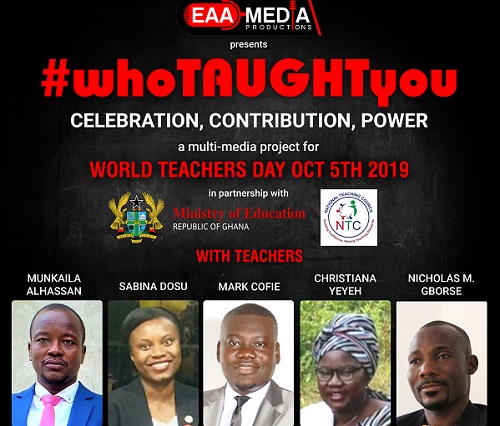 The Business Executive holds Corporate Hangout for past awardees