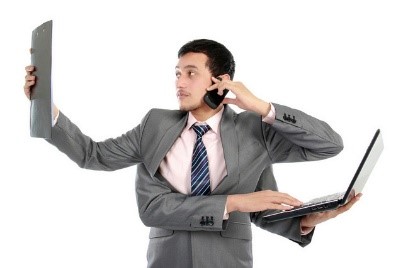 Task-switching and its effect on customer service

If the INSERM study is anything to go by, then one of the three tasks is not getting the necessary attention at all. Knowing how addicted we are to our mobile phones, it will not be strange that whatever the one is doing or watching on the mobile might be given prominence over the other two. I shudder to think of what happens anytime it is the customer that ends up getting the short end of the attention stick. Unfortunately, that is what happens on many occasions. Customers are given less attention than our mobile phones. Customers are treated as nuisances rather than the reason why the customer-facing professional left home that morning to come to work. There have been instances where customers have been snapped at or even verbally abused for trying to interrupt someone who was in middle of making a personal call during working hours.

Task-switching from the mobile phone, the computer and the customer might seem normal at first but it is far from that. It has been proven that task-switching greatly affects the performance of the individual because it takes a considerable amount of time for the brain to reset itself back to the former tasks. It was found in a series of experiments carried out for an article in The New York Times that when individuals were interrupted during a task, they become 20% less effective.

Written by Bob Sullivan and Hugh Thompson and published on May 3, 2013, the article made reference to an earlier study by Gloria Mark of the University of California, Irving. The earlier study found that although it took 25 minutes for an individual to return to an interrupted task, the average employee gets only 11 minutes between each interruption. If one considers the number of interruptions the average employee encounters in a given day, then one can only imagine how much the brain gets “punished” every few hours.

It is true that it might take just a micro-second to switch from one task and another. However, if one is to add up all the switching that happens during the day, then the real cost of task switching become apparent. Some studies suggest that all the switching during the day can cost a loss of about 40% of one’s productivity. The quality of customer service would therefore begin to suffer after hours and hours of switching between the mobile phone, the computer and the customer.

The state of flow is something that has been written about voluminously. Popularised by Hungarian-American psychologist Mihály Csíkszentmihályi, it is described as the “optimal state of consciousness where we feel our best and perform our best.” It is that state where people perform at their peak. It is during this state, also commonly referred to as ‘being in the zone’ that people lose all sense of time and even self. They become so immersed in what they are doing that they might even forget to eat. There is a sense of genuine happiness that one gets when one is in the state of flow. In fact, Csíkszentmihályi insists that the state of flow is the key to happiness.

The work at the front desk is different from that of carrying cement blocks at a construction site. It requires the use of the mind. All knowledge work demands more of the mind. Peak performance in a knowledge job such as serving customers requires an ability to keep one’s brain active and alert to customer problems, as and when they occur. Sometimes, a customer does not even need to complain about something before the front line staff gets to do something about it. When one is alert at the front desk, it is possible to detect issues way before they escalate to the point where the customer has to voice out his or her frustrations. When one is in the state of flow and enjoying what he or she is doing at the front desk, a single change of expression on a customer’s face can indicate that something is wrong.

However, to get into a state of flow will require some sustained concentration on what the one is doing. Unfortunately, it has been found that task-switching has a dire effect on the person’s ability to get into and maintain a state of flow because the one is not able to concentrate on one thing for a sustained period. The constant switching between task means that the one is unable to get into any state of happiness associated with being in the zone. This creates an attitude of exasperation which eventually begins to affect the output of the individual.  On other words, some of the unexplained bad moods we suffer at the front desk can be traced back to our attempts to do too many things at the same time.

The negative effect of the mobile phone goes beyond what it does to our brains whilst we are task-switching. The mere presence of the mobile phone lying on the front desk is an indication that the one is expecting an important call or message. That is to say, when that phone goes off, whether it is ringing tone or just a beep for a message alert, chances are that the phone will be answered. This places the mobile phone above the customer in the order of importance.

It might be argued that there are some frontline staff who use their mobile phones for official business. Granted, this is true. However, that does not mean that when the phone rings, it must take priority over the customer who is in front of you. The polite thing to do is to ask the customer in front of you if it will be alright for you to pick the call. And when you pick the call, you tell the one on the other end of the phone that there is a customer in front of you. That is the respectful thing to do.

In this day and age of ultra-rapid transformation, it is almost an impossibility to correctly predict what our world would look like in the very near future. However, one can confidently guesstimate that mobile phones would be around for a while. I heard someone say recently that when we have microchips implanted into our bodies we would not need phones anymore. Nothing is impossible, if you ask me, so it is entirely possible that this could happen.

However, until we get to that point, we would have to accept the fact that the mobile phone would still be clutched in our palms or snuggled in our pockets, purses and bags, as we move from place to place. We have to find a way of dealing with these devices before they deal with us. As a matter of fact, for some of us, it would not be untrue to say that we do not own our phones; our phones own us.

For those of us whose daily tasks and schedules involve dealing with customers, we have a double task of ensuring that the mobile phone does not become more important than one’s customer while at the same ensuring that it does not affect one’s mental wellbeing. Truthfully speaking, the best place to keep the mobile phone is out of sight when you are serving a customer, unless the phone is recognised and used for official purposes.

The role of technology is to help us in achieving what we want to. However, it is evident that our mobile phones are causing us a lot. The problem is not with the device per se but rather with the way we relate to it. Nomophobia or not, we need to effectively manage the way we relate to our mobile phones. Our constant task switching is having an effect on the quality of service we provide to our customers, whether we know and accept it or not. The quality of service is lost as the switch is done from the phone to the computer and then to the customer, and then back all over again.

Lessons from the COVID-19 Pandemic: my subtle admonishment to commercial...