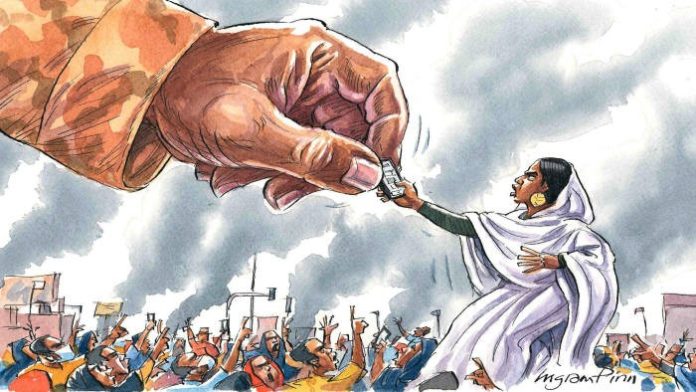 Across the continent, the double-edged nature of technology is more and more apparent.

Already this year, at least six governments in Africa have shut down the Internet, often with the complicity of western providers. This month in Sudan, as soldiers from a government paramilitary force went on a killing-spree in the capital, Khartoum, the Internet went dark, preventing protesters from documenting the violence on social media. By the end of it, more than 100 people had been killed and many more assaulted.

With the flick of a switch, an opposition protest movement that had just weeks before used social media to organise the overthrow of Omar al-Bashir, a dictator of 30 years’ standing, was reduced to the secret meetings and safe houses of the pre-Internet age. This is a particularly graphic example of the power of new technology for both progressive change and its opposite. But all over Africa, the double-edged nature of digital technology is becoming increasingly apparent.

Take social activists in the Democratic Republic of Congo who use online activism to try keeping their crooked government on the straight and narrow, but find themselves plunged into digital darkness when poll results are being cooked-up. On the face of it, an Internet shutdown in Africa seems less noteworthy than one in Europe, China or North America, where the use of online technology is more widespread.

Internet penetration in Africa — while rising more rapidly than elsewhere — is still just 37 percent, against 61 percent in the rest of the world.  Yet, in some ways, Africans are more dependent on Internet and smartphone technologies than people elsewhere. Nigeria has gone from 100,000 working fixed-line phones in the early 2000s to 170m mobile subscribers today. In a country with potholed, hazardous roads, the Internet is not so much an alternative highway as the only one.

Hundreds of millions of Africans use cellular services to transfer money to their families or pay for goods and services. In the absence of a universal banking system, if the mobile network goes down the impact can be devastating. Similarly, in countries with heavily-controlled print media, the Internet becomes the only source of reliable information — as well as one of rumors and deception.

In a cat-and-mouse game, Tanzania’s authorities have sought to tax bloggers out of existence by imposing exorbitant fees. Uganda has put a daily tax on the use of platforms such as Facebook, Twitter and WhatsApp, to curb what government deems ‘idle chatter’. More important even than the fragility of physical infrastructure is institutional and regulatory frailty. Consumers in advanced economies are only now waking up to the dangers posed by technology to their privacy and freedom.

In Africa, companies are still at the stage of what Kenyan writer Nanjala Nyabola calls “a mass data sweep” – in which information about an expanding consumer class is being busily devoured. Even governments may be vulnerable. Technicians working at the African Union headquarters in Addis Ababa in 2017 noticed that peak data usage in the building occurred every night between midnight and 2am. A report in Le Monde, vehemently denied by Beijing, said data from the heavily-bugged headquarters — a gift from the Chinese government — was being downloaded to Shanghai every night.

Many African countries are now almost wholly reliant on Chinese companies, including Huawei, for their digital services. Transsion, a Shenzhen-based handset maker, sells more phones in Africa than any other company. It has even begun manufacturing in Ethiopia. Many Chinese companies, including ZTE and Hikvision, provide the surveillance technology used by African governments to monitor — or spy on — their own populations.

See Also:  Getting the best out of bank mergers and acquisitions – the road to recovery (2)

CloudWalk Technology, a Guangzhou start-up, last year signed a deal with the government of Zimbabwe to provide a mass facial recognition programme. Zimbabwe will send data on millions of its citizens, captured by CCTV cameras, to the Chinese company – which hopes to improve technology that still struggles to distinguish between black faces. Ms. Nyabola, whose book Digital Democracy, Analogue Politics explores these tensions in her native Kenya, paints a picture in which the benefits and hazards of new technology are finely poised.

On the plus side, she says, citizens regularly tag politicians and judges on Twitter – demanding an accountability unthinkable even a few years ago. The contest is often evenly matched. In the run-up to the 2017 presidential elections, the Electoral Commission’s head of technology was found murdered. When the all-electronic system began to spit out results, citizens posted paper ballots online in an effort to expose what they suspected was wholesale fraud. In the end, the Supreme Court — a piece of kit invented in the 18th century — took the bold decision to order a re-run of the whole election. The incumbent won anyway.

“Using technology as a substitute for trust creates this black box,” says Ms. Nyabola. “But most of us don’t understand how these systems are built. So, what comes out is just chaos.”  Governments in Africa have a massive opportunity to use the digital revolution to improve the lives of their citizens. Too many are using it against them.

Your overall financial plan as an investor is not complete without...

‘Extend success story of maize under PFJ to soya’

All set for UMB Accra Open