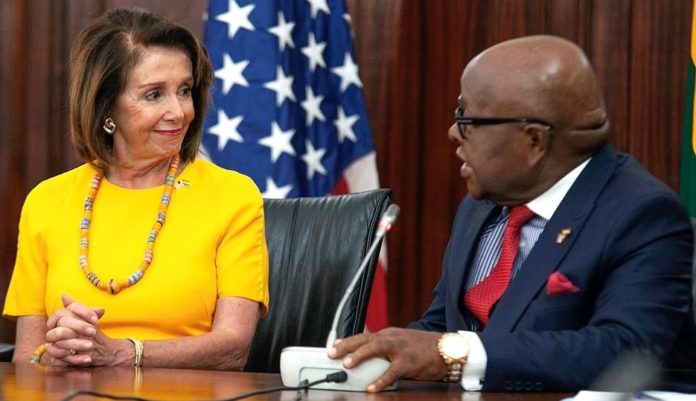 “Honourable Members! [Prof. Mike Oquaye pauses for emphasising effect]… it is, my, singular honour… to inform, on the presence… of, the Speaker, of the House of Representatives… of the United States Congress… Honourable… Nancy, Patricia, Pelosi!”

The camera turns to an attentive, African bead necklace-wearing Pelosi, who wasn’t expecting the glorifying roar that ensued from our Honourable Members in the Chamber… “yeeeeeah-yeah!”

Her reaction was very nice and warm. She seemed genuinely surprised, very flattered, and has at all times during this trip looked like she was having a really great time. She also definitely has made some new friends in our land, in particular our Speaker, Rt. Hon. Prof. Mike Oquaye. I am sure both Speakers have had a lot to speak about.

The Pelosi-led delegation was very impressive.

The delegation and local counterparts were scheduled to discuss “regional security, sustainable and inclusive development and the challenges of tomorrow, including the climate crisis”. It’s all the other discussions that should really intrigue you. Here’s why.

Nancy Pelosi is into making history.

Her earliest political stint was her role as Chair of the Northern California Democratic Party in 1977. She was born in 1940. She has since been on the good side of history many times over, continuously aggregating her legacy as an astute political juggernaut with sound judgement.

For instance, she voted against the Authorization for Use of Military Force Against Iraq in 1991. She again voted against authorisation for use of military force in Iraq in 2001.

She was the first woman to ever be elected House minority whip. Back in 2002, elected by her fellow democrats, she became the highest-ranking woman in congressional history with that role. When the Democrats won majority in the House in 2006 and Pelosi became Speaker of the House when the new Congress began, it made her the first woman to be as high in the line of succession to the US Presidency (second behind the Vice President).

On 7th February 2018, Nancy Pelosi set the record for the longest speech anyone has ever given on the House floor when she spoke for over eight continuous hours to oppose the budget deal to lift spending caps and avoid a government shutdown, because Pelosi did not like that the plan did not address immigration issues.

See Also:  Virtual cities: Designing the metropolises of the future

In January this year, US President Donald Trump declared his annual State of the Union address “cancelled” after Nancy Pelosi said that, while parts of the government remained shut down, she will bar the President from delivering his speech in the US House chamber.

Nancy Pelosi is force to reckon with.

This visit will serve Ghana well.

When US Presidents visited Ghana, it worked wonders for international diplomacy and multi-national relations between the two nations. Because a President stays in office for not more than 8 years, the influence of that personal relationship between Ghana and the US President, the singular man, is diluted after he leaves office.

We are no longer penpals to these beautiful people.

I believe the delegation had a wonderful, insightful time here and what they have experienced together will stay with them as their political careers continues to impressively unfold.

Last week, through this visit, Ghana has certainly made some good powerful allies that will serve us very well as they reiterate the culture of our people and the strength of our national resolve to champion regional development. So the non-scheduled discussions had with them should have been exciting, for I know not what they are. But I do know that if matters have been raised to this warm, refreshing delegation, led by the one and only Nancy Pelosi, we will have friends at the table on the other side of the pond.

Our President has declared 2019 as the “Year of Return” for Africans in the diaspora. It seems to be working brilliantly, seeing that a delegation of this calibre has made the historic journey to connect with the motherland. Tens of thousands of Americans are expected to pour into the country for commemoration celebrations. Our President phrases it a “birthright journey home for the global African family”.

See Also:  How to harmonise your personal brand

As more and more Foreigners are endeavouring to trace their ancestry, a year-long open invitation like this one is bound to attract a lot of tourists during the holiday period. The rise of African culture in the West has contributed to a lot of black men and women seeking some form of a link their very own Wakanda, and they want a story to match also.

Ghana IS the Gateway to Africa!

Ghana being the country of choice for black foreigners wanting to come “home” to Africa is pretty straightforward, really.

Our independence in 1957 made Ghana the first black African country to relinquish herself from colonial rule. That’s 1.

On 6th March 1957, the first President of Ghana Dr. Kwame Nkrumah, during the Independence Day celebrations, spelt out a pan-African vision that sent shockwaves across the globe. Attending the celebrations were none other than American activists and civil rights leaders Martin Luther and Coretta Scott King. That’s 2.

These and many more boost and validate Ghana’s esteemed image as a destination for heritage tourism.

What the world saw was really amazing because cameras captured a very powerful woman truly inspired the history of African Americans. The saw a US political leader truly captivated by Ghana’s reputation for our friendly embrace, for she had just validated it. The world saw you Nancy speak well of us, you walked where our ancestors walked, and you signalled to the African diaspora that Home really is Ghana.

For that, Ghana thanks you.

Maxwell Ampong is the Group CEO of Maxwell Investments Group, an International Trade and Business Development Solutions Provider. He is also the Property Investment Consultant for Coldwell Banker Commercial Real Estate Ghana. He works with a team of motivated professionals, governed by industry experts with experience spanning over a century. He writes about trending and relevant economic topics, and general perspective pieces.   Facebook:@thisisthemax   Instagram:@thisisthemax   Twitter:@thisisthemax   LinkedIn:/in/thisisthemax   Website: www.maxwellinvestmentsgroup.com   Email: maxwell@maxwellinvestmentsgroup.com