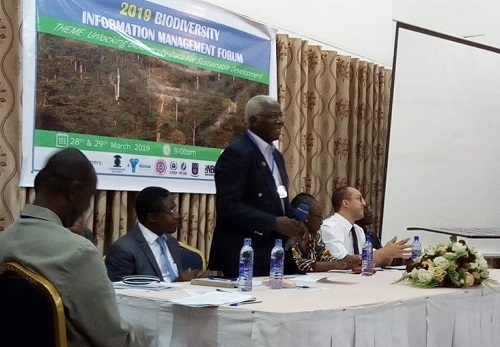 As countries continue to take action to implement the Sustainable Development Goals (SDGs), and members to the Convention on Biological Diversity (CBD) await the coming of year 2020 to agree to a new global biodiversity framework, it has become clear that data has a crucial role to play.

Because biodiversity is key to the attainment of the goals on these two international agendas, they will require free, open and productive flow of spatial data that can help to track, plan and deliver on their goals for sustainable development. Fortunately, the world has entered into another phase of industrial revolution – propelled by accelerating technological changes with handy tools that facilitate the compilation, production and use of spatial data.

However, African countries are said to be losing big-time in the global share of investments in conservation businesses and green economy in particular, because they lack primary data to quantify baseline biodiversity patterns or evaluate local ecosystem services.

Of the total amount of US$8.2billion private capital invested in sustainable food and fibre, habitat conservation, and water-quality improvement and delivery between 2004 and 2015, “only 9% of this huge investment occurred in Africa, with the bulk being invested in North and Latin America”, according to Ghana’s Minister of Environment Science Technology and Innovation (MESTI), Prof. Frimpong Boateng,

He added: “The lack of a Biodiversity Information Monitoring System to effectively measure the sector’s impact largely accounts for the low investment in African countries”.

The minister’s comments were contained in a statement read on his behalf by the ministry’s Chief Director, Mrs. Lovina Owusu, at the 2019 Biodiversity Information Management Forum (BIMF) hosted by Ghana in Accra about a fortnight ago. It was on the theme ‘Unlocking Biodiversity Data for Sustainable Development’. The purpose was to provide space for African countries to coordinate their efforts to digitise and utilise biodiversity data.

The idea behind the Forum, which was first held last year in South Africa, is to ensure that Africa fits into the current global trend to provide centralised spatial data on biodiversity which can easily feed into national development decision-making and planning. The Accra Forum brought together some key players in biodiversity information management from academia, scientific research institutions, government ministries and agencies as well as NGOs from Ghana, Malawi, Rwanda, Namibia and South Africa.

Prof. Frimpong Boateng called for more serious attention to be given the exercise of mobilising biodiversity data, and said: “For investors to confidently support any green enterprises for sustainable development, they want consistent, standardised and accurate evaluations of natural capital and biodiversity”. He commended the effort being made to connect all biodiversity data and information systems to a centralised system, adding that “this is critical to addressing biodiversity data needs in Ghana”.

See Also:  Oaths! Here and there

The Chairman for the Forum, Prof. Alfred Oteng-Yeboah, expressed concern about Africa’s low capacity for generating data, and said with the SDGs now in place Africa has to sit up and address the existing gaps in biodiversity data. He admitted that, “collection of data is not an easy task, but very expensive requiring lots of funds,” adding, “African governments were mandated to support data gathering with 1% of their GDP in the early days of the Organisation of African Unity, now African Union”.

Prof. Oteng-Yeboah said: “It now time for African governments to buckle-up and support the current initiative to address the on-going decline of our biodiversity”.

The Forum also served as an occasion to host the first African Biodiversity Challenge (ABC) Competition instituted in 2017. It is coordinated by the South African National Biodiversity Institute (SANBI) with support from the JRS Biodiversity Foundation.

The purpose of this maiden version of the Scheme was to award the country-team that was able to best publish as many policy-relevant data as possible by the end of 2018, so that the data-sets were made available to national decision-makers.

Ghana, Malawi, Rwanda and Namibia teams participated in the Scheme. Team Ghana was adjudged the best and awarded the Gold Prize for mobilising an “impressive 23,362 data records that are highly policy-relevant and have already been used by multiple stakeholders”. They include Vital Info Consults, whose BOAME Cocoa Scheme has used the data to identify shade-tree species that are desirable for planting in cocoa farms to improve ecological health on the farms.

Managers of the Community Resource Management Area (CREMA) around the Mole National Park have also used the data to inform management plans on indicator species such as the Wild Water buffalo, which is considered endangered under the IUCN Redlist Species. This list provides a comprehensive inventory of the global conservation status of biological species, and uses a set of criteria to evaluate the extinction-risk of species.

Through the data, Biodiversity Heritage Associates has identified an invasive species that is prevalent in the Bosomkese Pamu Berekum and Goa Shelterbelt Forest Reserves. The group intends to further use the data for a general invasive species management programme in the reserves.

Additionally, Rural Support Network has used four datasets to identify rare birds and threatened frog species in parts of the Western Region. With this insight, the group is supporting the creation of a new CREMA to conserve these species.

Team Ghana is made up of public institutions and NGOS: namely Conservation Alliance, A Rocha Ghana, University of Ghana, and the Council for Scientific and Industrial Research’s Plant Genetic Resources Research Institute (CSIR-PGRRI).

See Also:  The making of a multimillion dollar business …how GOIL survived divestiture scare to become a national pride

In an interview, the Executive Director of Conservation Alliance, Yaw Osei-Owusu, said Team Ghana’s work will be stepped-up to develop information products focusing on agriculture and biodiversity as well as economic products. These will include Redlist ecosystem assessments, demarcation of spawning sites for fisheries, food distribution maps, and non-traditional products’ contribution to food security.

Mr. Osei-Owusu said the team will also explore additional partnerships for making use of the data. Targets for such partnership are mainly biodiversity-related projects like REDD+ and interventions under the Forest and Wildlife Policy, particularly CREMA formation and management.

He said the ultimate goal is the eventual establishment of a Biodiversity Information System that serves as a central hub where digitised biodiversity data are stored and formatted consistently in a user-friendly manner.

The Coordinator of the Initiative, Matthew Childs, explained that the scheme’s long-term goal is for countries to be able to use biodiversity data in measuring the value of ecosystem services and their contribution to national economy. This will then be integrated into the relevant national development plans so governments can use it in making decisions, and “hopefully protect areas of high ecosystem services”.

He said the reason this had not happened before is, “because data are not accessible, or have not been computed into formats that are understandable to decision-makers, so it’s not clear how to make decision based on that”.

In a statement read on his behalf, the Director General of the Council for Scientific and Industrial Research (CSIR), Prof. Victor Agyemang, commended the Initiative and promised to lend the diverse expertise of the CSIR to ensure the successful establishment of a central hub for Ghana’s Biodiversity Information System.

A Chief Research Scientist with CSIR Science Technology Policy Research Institute (CSIR-STEPRI) and the Chairman for the Ghana Connect Project, Dr. George Essegbey, welcomed the Initiative saying: “It is one that Africa should embrace as it seeks to mobilise data as a foundation for high decision-making and development”.

Earlier, resource persons from several biodiversity data-related projects updated participants on the progress they are making. Ernest Lamptey talked about the Ghana Connect Project and its strategic partnership with the ABC Initiative. He said agriculture is a priority area for the project. Therefore, Connect Ghana is collaborating with the Ghana Team to assemble potential data providers and end-users to develop appropriate biodiversity information products to address specific demands for information in that sector.

Jeffery Manuel of SANBI presented an overview of the Institute’s data mobilisation and management project, and stressed that: “Mobilising biodiversity data is key for us; because if our ecosystem collapses, we will collapse with it”. He said in order to close existing gaps in the use of biodiversity information, the information should be made relevant and available for the people.